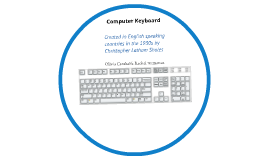 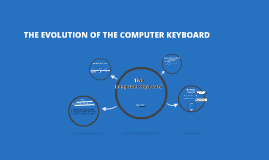 Transcript: change of the exterior design the QWERTY layout THE EARLY STAGES OF THE KEYBOARD THE KEYBOARD TODAY The Computer Keyboard Brian Park THE EVOLUTION OF THE COMPUTER KEYBOARD 1700 THE KEYBOARD IMPROVES http://www.daskeyboard.com/blog/typing-through-time-the-history-of-the-keyboard/ 1714-1800s The Keyboard changes sizes and shapes from the original "sewing machine type" model http://inventors.about.com/od/computerperipherals/a/computer_keyboa.htm Period 2 Impact of the Keyboard on Society http://www.officemuseum.com The Computer Keyboard A keyboard is a set of keys that are arranged into tiers and is used to operate a computer or laptop. 1984 Personal Computer with 101 keys is manufactured http://home.earthlink.net/~dcrehr/whyqwert.html Used to operate computers and other devices such as tablets/phones used for typing documents hotkeys on keyboard make things easier used for gaming 1714 The first patent for a typing machine was issued in London. TIMELINE OF THE KEYBOARD 1873 Christopher Latham Scholes invents the first commercially successful type writter Christopher Latha Scholes and Carlos Glidden comes up with the QWERTY format References 1981 Personal Computer with an 83-key keyboard that has 10 function keys, a Number Lock key is released by I.B.M The Computer Keyboard http://www.datamancer.net/ 2000 1994 the keyboard is released in modern day format 1714 Remington (manufacturer of the sewing machine) manufactures the first typewriter. http://partners.nytimes.com/library/tech/99/08/circuits/articles/12keys-timeline.html http://scilifestyle.com/the-history-of-the-computer-keyboard.html The Major Changes http://life.time.com/ The keyboard changes its size and shape to the modern day keyboards http://www.daskeyboard.com/blog/wp-content/uploads/2011/06/Colemak.png 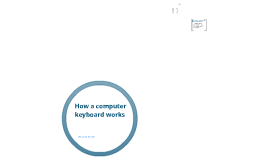 Transcript: How a computer keyboard works How computer keyboards work as soon as the circuit is cut off the processor uses a keymap ( character map) to find out which circuit has been cut off and if the "shift" is being pressed to capitalize it. By Lance Kopplin on a computer keyboard all the keys have a individual circuit under it. when a key is pressed it causes a switch to connect and make a electric current for the keyboard processor to pick up. Some random fact i would like to share with you computer keyboards have from 80 to 110m keys on it. ours have 102 keys on them. 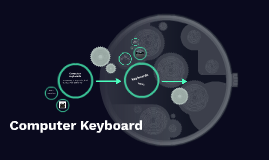 Transcript: Thumb size Standard alphanumeric keyboards have keys that are on three-quarter inch centers (0.750 inches, 19.05 mm)[citation needed], Key travel of at least 0.150 inches (3.81 mm). Computer Keyboards Laptop Size Keyboards In computing, a computer keyboard is a type writer-style device Typewriters TYPES Computer Keyboard Function Keys Standard A function key is a key on a computer or terminal keyboard which can be programmed so as to cause an operating system command interpreter or application program to perform certain actions, a form of soft key. While typewriters are the definitive ancestor of all key-based text entry devices Gaming keyboard 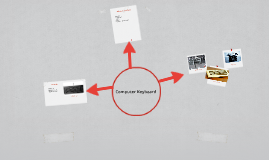 Transcript: First Keyboard Where to purchase Typewriter HP Keyboard Computer Keyboard Best Buy Future Shop Apple Online Any other electronic store What is it? How do I use it? Why do I use it? Laptop Keyboard The Basics 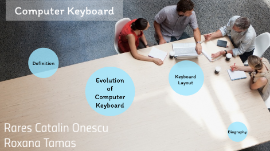 Transcript: Computer Keyboard Rares Catalin Onescu Roxana Tamas Definition A computer keyboard is a typewriter-style device which uses an arrangement of buttons or keys to act as mechanical levers or electronic switches. Following the decline of punch cards and paper tape, interaction via teleprinter-style keyboards became the main input method for computers. Keyboard keys (buttons) typically have characters engraved or printed on them, and each press of a key typically corresponds to a single written symbol. Evolution of Computer Keyboard Evolution of Computer Keyboard Reed-switch keyboard Reed-switch keyboard One of the first computer keyboard designs from the early '70s incorporated reed switches, which work with a magnet and two metal filaments. When the magnetic field gets close enough, it pulls the two filaments together and thus completes a circuit -- or, in the case of a key, a keystroke. Capacitive-switch keyboard Capacitive-switch keyboard 2 Keen to get away from unreliable reed switches, Key Tronic developed the capacitive switch in the late '70s. It worked by putting a little bit of aluminum under the key top. When the key was depressed, the foil changed the capacitance of the circuit board underneath, and a microprocessor registered a keystroke. Here KeyTronic shows of the layers of it's capacitive keyboards from the late '80s and early '90s. Buckling-spring keyboard Buckling-spring keyboard In 1978, IBM received a patent for a "buckling spring" key mechanism that mimicked the feel of the old Selectrics. The mechanism worked with a small spring attached to non-parallel surfaces under the keycap. The spring coiled normally when depressed but "buckled" to the side at the snap point due to the non-parallel surfaces of attachment -- and created the familiar click-clack sound of IBM's popular Model M keyboard and other old keyboards. The buckled portion of the spring activated the circuit, which generated the keystroke. Rubber-dome keyboards Rubber-dome keyboards Rubber dome-based keys, which work with the same snapping principle as a toilet plunger, came to prominence in the late '80s and early '90s and are found in many of today's standard desktop keyboards. The key caps push down on the domes, which collapse, closing circuits and recording keystrokes, and then snap back. Scissor switches Scissor switches Scissor-switch keyboards also have rubber domes but use scissoring mechanisms attached to the key tops to push down the domes. The mechanism, typically found in laptops and thin keyboards, shortens the distance a key must travel to record a stroke, which allows the keys themselves to be shorter. Ultrabook keyboard Ultrabook keyboard As laptops grow ever more svelte, manufacturers are constantly trying to cut costs and make the keyboard smaller -- without sacrificing users' comfort. The Vizio Thin + Light shown here is one of the current crop of ultrabooks striving for a comfortable, responsive keyboard in an ultraslim profile. This is no easy task: Laptop makers must weigh ergonomic factors against dimensions, weight, cost and other practical design considerations. Striving to push the envelope for thin yet fully functional laptops, Synaptics' ThinTouch technology replaces scissors and domes with a new type of capacitive sensor that the company says will have about half the travel of a MacBook Air's keys. Synaptics hopes to turn its prototypes into a commercial offering by the middle of 2013. ThinTouch keyboard ThinTouch keyboard Tactus microfluidics buttons for touch screens Other hardware makers, meanwhile, are working to improve typing on smartphones and tablets. Most of these devices rely on virtual keyboards on the flat display surface, which provides no physical feedback for users' fingers. While incorporating haptics (targeted vibrations) into the screens is the most common solution today, a company called Tactus is taking a different approach with microfluidics "buttons" -- essentially small pouches on the surface of the screen that fill with liquid, appearing only when you need to type. When they're not in use, they deflate, leaving a flat surface. The company hopes to make its technology available to device makers next year. Tactus microfluidics buttons for touch screens Twitch Technologies wraparound keyboards Twitch Technologies wraparound keyboards Twitch Technologies proposes another solution for the touch-screen typing problem: a pair of one-handed keyboards that wrap around the left and right edges of tablets. Your fingers type on the back of the device and your thumbs on the front, and you use finger combinations to type letters -- for example, depressing your left pinky and right thumb might get you an A -- rather than one key per letter for the QWERTY layout. (This product is still in the concept stage.) Keyboard Layout Keyboard Layouts The main and the most used layout is QWERTY. QWERTY is a keyboard design for Latin-script alphabets. The name comes from the order of the first six keys on 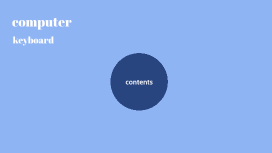 Transcript: computer keyboard computer keyboard is a peripheral input device contents what is a keyboard? what is a keyboard? a keyboard is an input device that uses an arrangement of keys or buttons that have letters, numbers or symbols that when pressed the symbol on the keyboard then shows up on the screen. to display some symbols you need to press another key then the key you desire to display on the screen. what is used for? keyboards are mainly used for typing or programs such as Windows Microsoft Word or PowerPoint. keyboards are also used for computer gaming and there are some special made keyboards you can use for gaming. what is it use for? how does a keyboard work? how does it work? a keyboard looks the same as a computer on the inside because it has a processor and circuits. the keyboards we use today are called Dome-Switch keyboard. when the key is pressed a small rubber dome is pressed down it connects a pear of conducting lines together on the circuits. A chip inside the computer receives a signal and decodes that code into the key that was pressed. 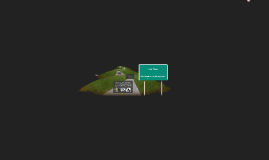 Transcript: How are the materials processed? The most popular way to process carbon black is the Furnace Black Process-forms carbon black by blowing petroleum oil or coal oil as raw material (feedstock oil) into high-temperature gases to combust them partially. This method is suitable for mass production due to its high yield, and allows wide control over its properties such as particle size or structure. There are many different things that you have to get to make tires, a few are rubber, carbon black, and sulfur. To get rubber you cut into the bark of a rubber tree and let the sap run into a container. To get carbon black you take crude oil or natural gas and burn it with limited oxygen created combustion and carbon black. Sulfur is a element that is found in deposits underground, to get to it miners have to drill into the deposits and use pipes to extract it. Car Tires How do we get the materials? What would we do without them? To process rubber you first obtain it, then create smoked sheets of it, and then use it in different ways.