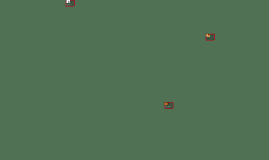 Transcript: The first full sentence of Egyptian writing was dated back to the second dynasty (2890-2686BCE) Comparative Analysis Hieroglyphics and Cuneiform by Mark Valerio Hieroglyphics were heavily influenced by Sumerian script and the idea of giving a written language came from Mesopotamia. Hieroglyphics are the written language of the Egyptians used to communicate through logos, pictures, and symbols. 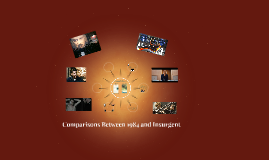 Transcript: Insurgent Used love as a form of rebellion Love was not accepted by society Simulations 1984 Love was accepted by society Book Trailer 1984 Why is this important? Used love to escape from problems in their life Insurgent Escaped mentally George Orwell Comparative Analysis Sequel of Divergent Faction lines divided Meet the Factionless Erudite controlling society with Simulations Discover the reason behind the factions Veronica Roth Relationships “ And what he wanted, more even that to be loved, was to break down the wall of virtue, even if it were only once in his whole life. The sexual act, successfully performed, was rebellion. Desire was thoughtcrime." Mental Control Comparisons Between 1984 and Insurgent "You had to live- did live, from habit that became instinct- in the assumption that every sound you made was overheard and, except in darkness, every movement scrutinized” Telescreens Newspeak Why is this important? Escaped physically 1984 Insurgent 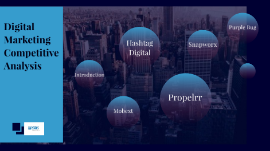 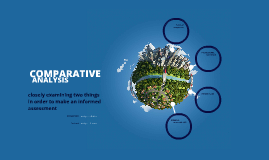 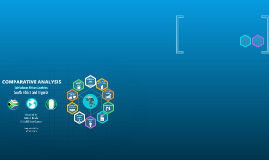 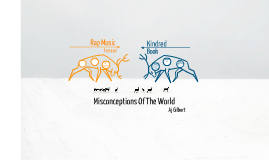 Transcript: Tom Weylin- " How about you teach Rufus how to read and write, considering the school teacher doesn't read as well as you can" Lyrics from Rap stars are usually considered negative to young people Alice's mother immediately judged Dana when they first met. Dana Killed Rufus Dana: "My name is Dana. I'm a free women." She immediately took a good look at me up and down and began to judge me. Alice's Mother- "You're a runaway, you mean?" Before Rufus father, Tom Weylin, got to know Dana, he assumed she was uneducated like every other black person in their time. HOWEVER, HOWEVER, It's called ENTERTAINMENT WELL... "Work it harder/Make it better, Do it faster,/Makes us stronger, More than ever/ hour after hour work is never over" People say that the lyrics rappers say often describe their lifestyles Aj Gilbert Rap Music People think that the lyrics rappers say in their songs often describe their lifestyles, and in "Kindred" Dana thought that she could change Rufus and prevent him from growing up to be like his father, Tom Weylin. Ludacris- Runaway Love Rappers often get accused of delivering negative messages in their songs, while in "Kindred", Tom Weylin thought Dana was uneducated because she was black. Rappers are often considered violent people, due to the lyrics in their songs. Misconceptions Of The World Kanye West- Stronger Eminem- Lose Yourself Citizens of the world, of all races have judged people based on what they've heard or seen. These misconceptions have become a common problem because it lays the foundation for stereotypes that are not based on factual information. Tom Weylin- "She's a Nigger, she doesn't know how to read or write" Most people think all rappers are violent people because of their lyrics, and in the book " Kindred", Alice's mother thought Dana was a runaway slave due to the clothing she was wearing. People make misconceptions about other people without knowing who they really are. "Now little Lisa is only 9 years old/Shes trying to figure out why the world is so cold/ Why shes all alone and she never met her family/ Mamas always gone and she never met her daddy" Issue Later on in the story... In Conclusion... “The Carter IV” — Lil Wayne’s real name is Dwayne Carter Jr. Sold well above the 850,000 to 900,000 that the Billboard had predicted. Kanye West- Stronger Told you to keep your head up and get through the tough times. Kindred Dana thought she could change Rufus and prevent him from growing up to be like his father, Tom Weylin. Lil Wayne built a skate park in New Orleans T.I handed out toys to children at a charity event Jay-Z owns the Brooklyn Nets and started a charity fund for children When Rufus grew up, he attempted to rape Dana because she looked similar to Alice, whom he was deeply in love with. Eminem- Lose Yourself A song that begs you to try your hardest to succeed. It's their job, and they make money by entertaining people who actually appreciate their music Ludacris- Runaway Love The song tells the story of little girls that have grown up being abused by their mother’s lover and ignored by the world. Each verse depicts how naive young girls transform these demoralizing actions in order to build a better life for themselves. Jay-Z and Kanye West’s album “Watch the Throne,” had 290,000 downloads in July. Many people throughout the world have misconceptions about people based on how they live, how they act, the clothes they wear and even the people they hang around. "You better lose yourself in the music/ The moment You want it, you better never let it go/ You only get one shot, do not miss your chance to blow /This opportunity comes once in a lifetime" Book 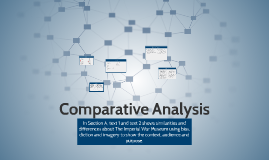 Transcript: Bias Text 1: To explain the places that are interesting in the Imperial War Museum and kid friendly "If you like or want to learn WWI and WWII history, you will be happy" Audience Text 1: Parents and children who are interested in sight seeing things about the Imperial War "suitable for adults without kids and those with kids" "for younger kids the first floor allows them to see tanks and guns" "they were less to my daughter's interest than they would have been to my sons" "having just visited another Holocaust Museum, my child did not want to see that exhibit" Diction Text 2: The author is a company so their giving information for workers. ie: "back to office with new outlook on life" "this museum is probably going to shave half an hour off your lunch break" Imagery Text 1: The author is a parent and points out kid friendly places ie: "While I can spend hours in any museum, my daughter cannot" "they were less to my daughter's interest than they would have been to my son's" Text 1: daughter kids art museums so tanks guns child us "achieve peace in our time" glorify parent Context/Purpose Text 1: newsreels and papers show the public's fear maps, papers, letters, etc, make the time period come alive first floor allows them to see tanks and guns the lower floors have a walk through of a WWI trench early tank, some large artillery Text 2: cool planes, tanks, boats and submarines on the ground floor red bus that was used to transport soldiers in World War I Vera Lynn records, gas masks and a mother having it away with an American airman in exchange for silk stockings the Death Clock that ticks at the rate of one casualty of war a minute German periscope you can peek through relives the horrors of trench warfare, minus the rats, blood, mud and bad poetry Text 2: To persuade people to come to the Imperial museum on their break and be guided on a tour that will be timed. "London in your lunch hour!" "An hour very well spent" Text 2: office hour lunch break time 3pm meeting Text 2: Adults with jobs who are interested in somewhere to go on their breaks "Back to office with new outlook on life" "There isn't time to appreciate the superb Holocaust exhibition (though you should go another time) so slink back to the ground floor" "The 3pm meeting you were dreading will suddenly seem less of a chance" Comparative Analysis In Section A, text 1 and text 2 shows similarities and differences about The Imperial War Museum using bias, diction and imagery to show the context, audience and purpose. 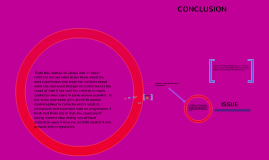