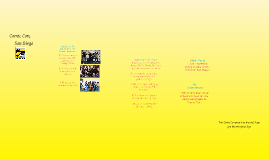 Transcript: Comic Con, San Diego People Go To Comic Con For These Reasons: 1. To meet actors and actresses. For example the Twilight Cast. 2. To meet comic artists, inkers or writers. 3. Dress up like comic characters! Comic Con Fun Facts 1. Look at the 'The Reasons People Go To Comic Con' and you will see some fun facts. 2. You may be lucky to get autographs if you are patient enough. 3. Have fun by dressing up as your favorite comic character. 4. There is a lot of people so stay with your group. 5. Have fun at Comic Con with your family. Other Facts 1. Los Angeles is trying to take Comic Con from San Diego. My Experiences 1. My mom's friend is an inker for X-men and he signs autographs at Comic Con. This Comic Con prezi is to the end. Hope you like this prezi. Bye! 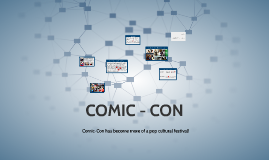 Transcript: It doesnt bother me who i go as, as i said im not a quiet person and my self esteem isnt low at all, i think that i dress up because it is nice to make an effort when going to places like this because it makes a nicer atmosphere and people are more friendly towards you What Comic - Con means to me Why do you go to comic con? Does the group have a leader? I have mentioned it to most of my friends and have even asked some of them to come along to check it out but they are not as into it as i am. i think that it depends on how confident you are as a person whether you tell people about going to events like this. I am the youngest of the group and Pete is like an older brother to me so he says i am the baby sister of the group because i have known him for about 9 years. I wasn't too sure what to expect, I suppose I thought the same as you, that most of the people there would be geeks and really over the top but I was completely wrong! When i am with these guys I let all the worries i have go and I am always happy because they are all there for me and are also so funny so i am never stressed about college or work. Which parts of the groups identity do i take on? What did you expect the first time you went to comic - con? Going in a group with some of my friends was good because it made me feel better about going than if it would have been just a few of us. This is because when people are in a big group of all the people they know it makes them feel a lot more secure as they have people that are in the same situation as them. When I first went to Comic – Con, I wasn’t going because I was very interested in it, I went because my friends were going and they said it would be a fun day out and it was. This year I am going because I really enjoyed seeing all the costumes and because it has interested me a bit more. Comic-Con has become more of a pop cultural festival! COMIC - CON I know most of them from dancing but some through my friend Pete Interview with a Comic- Con enthusiast Does it help your self - esteem when you dress up or are you happy to go as Pete? Are you happy to tell your friends about comic con? I am more myself in the group because i am outspoken when I am with them. Going as a group What do i have in common with the rest of the group? Comic con is held every 6 months in London's Royal Victoria dock. It brings together some of everyone’s favorite stars from TV, Films and Comics as well as hosting lots of fun activities including photo shoots, panels, autograph sessions and hundreds of stalls full of Film props. people that have visited comic - con I would say that Pete is the leader of the group because he knows all of us and he is all of our mutual friend. I've loved going to comic con since i first found out about it a few years ago and i haven't missed one since. I love seeing all the costumes that people come up with and some people really do go over the top! Is my identity the same in the group? I was quite anxious the first time I went to comic con with my friends because I was not sure what to expect from it, I thought that it was going to be quite a geeky thing where lots of comic enthusiasts came together to talk about everything that was involved in comics. As I am not that interested in comics I didn’t think that this was going to grab my attention that much and I wasn’t that bothered in going. I was amazed when we got to the venue of the event because it was so busy, I didn’t think that this many people would show up to it because in my area there are not many people that know about it This interview shows that not everything is how you would expect it to be and i have learnt to have more of an open mind about things now because otherwise there could be so many things that i will be missing out on What parts of my identity do i suppress in the group? 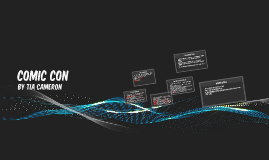 Transcript: works cited transportation can be tricky with the nightmare of parking downtown. Taking the public tram or train can be a solution. Snacks are your best friend as they will help you get through the day. Eat in the morning so you're not starving in line. Take breaks during the con so you can last the whole day (s) Comic Con preparing for comic con preparing cont. entertainment ticketing By Tia Cameron http://speedforce.org/con-tips/ http://saltlakecomiccon.com http://sdccblog.com/2015/01/san-diego-comic-con-2015-pre-prep-list/ History of comic con The first comic con started in San Diego California, 1970 at the u.s grant hotel. 300 people attended. created by shel dorf, richard alf and ken krueger. Salt lake comic con started in 2013 with 72,000 people (largest first year comic con). fanx is a sub-convention featuring more information on tv, movies and actors. Salt lake comic con is normally held in September at the salt palace convention center (is subject to change) event floor booths - artist alley, merchandise (jewelry, clothing, art, toys, weapons, comics and electronics.) celebrity photo ops and autographs. attendees (cosplayers) panels Cosplay contests vip pass - $230.00, maximum pass that includes 3 day pass, early entry for every event such as celebrity booths, panels. Includes rfid wristband gold - $95.00, 3 day admission, rfid wristband, early entry multipass - $60.00, 3 day admission, rfid wristband saturday - $40.00 (adult), $28.00 (youth 9-16), rfid wristband friday - $35.00 (adult), $24.50 (youth 9-16), rfid wristband thursday - $25.00 (adult), $17.50 (youth 9-16), rfid wristband child - $5.00, 3 day admission for 8 and under, wristband get there early so you can beat the crowds and get earlier access plan what you're going to see at the con. A well organized day with make it more enjoyable wear comfortable clothing as you will be having a busy day walking and maneuvering through crowds bring enough money for food and souvenirs if you cosplay, then make sure to bring everything you need for your costume as a problem could arise. 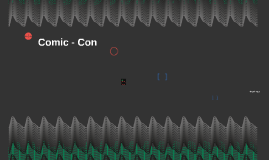 Transcript: also fans come from all over the world to come to comic - con Thank You! Comic - Con Comic - con is the worlds largest convention celebrating comic art It all started when a group of comic, movie, and science fiction fan came together to put on the first comic book convention Comic - con was created by Shel Dorf, Ken Krueger, and Richard Alf in 1970 At comic -con people sell books 62 ECG bpm 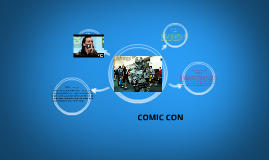 Transcript: Collectables and prizes This summer my dad,brothers and I are all going to comic con that will be in New York. One of the biggest comic conventions of the year. We will get to meet some great actors from movies and some famous Youtubers from different areas. Some things you can get from comic con are prizes, collectables, and dangerous things such as swords, and other types of things. There are many prizes that you can earn from participating in games and earning them from an actor/actress. Comic con goes on for 2-3 days and you can rent a hotel for those days but the sad part is when it ends. But you get to have a great time, meet some great people and actors/actresses that played from movies like kick ass 2, the avengers crew and others. A clip from comic con COMIC CON When we go How long does it continue 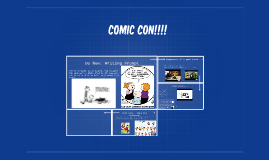 Transcript: Setting...Plot...the point??? List some possible characteristics of a comic character. Do Now: Writing Prompt - Simple (easily redrawn) - Specific characteristic (funny, rude, insightful) - What makes a good comic? - Why are characters important in a comic? Exit Slip...Make the character What dialogue if any is happening in your story? Are you ready to begin drawing? Comic Con!!!! I want you to think about what is going to happen in your comic? How are you going to set that up? Is it funny? Components of a good comic...? Characters... Example: Walking a dog in the park...and he pees on a persons foot instead of the grass. You're stranded on an island. You escaped the ship with 1 item. What is it? How are you going to survive until help comes in 3 weeks. 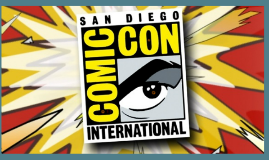 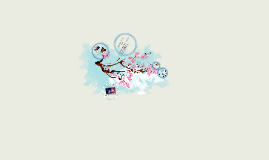 Transcript: "hello doctor who merch" that means i have $3,996 dollars for spending money!!!!!!! at comic con you can dress up as charaters and you can meet your favorite charaters. its $85.00 to get in for three days how long will you stay? $350 cause i can eat the dollar menu from mcdonalds $450 is the price im paying for gas to get there and back. TO THE MOON!!!!!!! what will you do when you get there? gas? i will be staying for three days and i will stay at the omni hotel its $169.00 for three nights i will dress up as the 11th doctor and i will look for some super cool doctor who characters :) comic con in all i'm spending $1,004.0 you have to sing it to understand it haha random people >>>>> mcdonalds brings people together >> we're going on a trip in our favorite blue TARDIS zooming through the sky..... i already have this >>> food