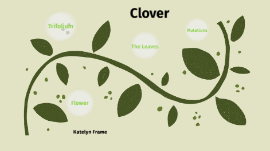 Transcript: Katelyn Frame Clover Trifolium Genus Trifolium The Clover is a common name for plants of the genus Trifolium consisting of around 300 species of flowering plants The word Trifolium stems from the Latin words "tres", meaning three, and "folium" meaning leaf. Combined these words create an accurate description of the form of most clover plants Plant Trifolium Repens Flower The Trifolium Repens, also known as the "White Clover", is one of the most commonly found clover plants. While clover plants can have flowers red, purple, or yellow, the Trifolium Repens has white flowers. With age, the flower can get a pink or cream tint. Flower Form The Flower The flower is composed of dense spikes These spikes sprout from the stalk and form a spherical appearance from the top and a half spherical appearance from the side The flower heads typically range from 1.5-2 centimeters, or 0.6-0.8 inches, wide The Stem The stem of the plants are cylinder in shape They are very thin They grow relatively straight after the initial curve off the root but tend to bend slightly due to the weight of the flower They average around 18 centimeters or 7.1 inches long Stem Form Leaf Form The Leaves The most known part of the clover plant is its leaves. They are what most would call shamrocks They are typically trifoliolate meaning they have 3 leaflets They have a smooth texture They are relatively flat with a slight "v" shape bend at the midrib creating the 3D form Their shape can be elliptic (elongated circle), egg-shaped, or even slightly heart shaped The differences in shape can be attributed to the exact type of clover plant and the geological area The midrib of the leaf also creates the slight indentation at the top of the leaf. This in turn helps to create the slight hear shaped appearance that some leaves have They are shades of green typically with light or dark markings They are connected to the stem by a long petiole Midrib Stem Veins Petiole Heart Shape Pics Egg Shaped Elliptic Shaped Heart Shaped Quatrefoiled Mutations Considered to be lucky, four leaf clovers are rare. On average, there is 1 four leaf clover to every 5,000 three leafed clovers. The four leaf clover is similar in form to the three leaf clover except for the added leaf. What causes the change in form? A Recessive Gene appearing in low frequency Collision and Interaction of multiple genes at once causing a developmental error Genetic Mutation Environmental Factors It is likely that a combination of all of the above could cause this rare occurrence While the four leaf clover is the most common mutation, a clover can be cinquefoil (5), septfoil (7), more or in between in the number of leaves. These extra rare mutations are caused by all of the same factor as the four leaf mutation but have somehow developed more leaflets. The higher number of leaves, the even more rare. The world record for the highest amount of leaves on a clover is 56 and was discovered by Shigeo Obara of Japan, on 10 May 2009. This of course changes the shape of the plant because instead of being flatter, you have a bushels of clovers overlapping each other creating an almost sphere shape. How Many Leaves? More Variations 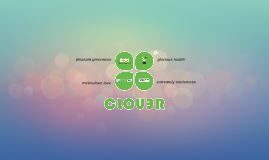 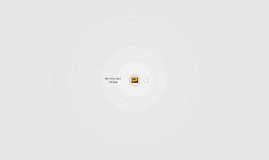 Transcript: Throughout the advert the scenes and the music help create quite a calm and satisfying mood. This could be clovers attempt at showing that if you buy clover you will be completely satisfied with their product and everything about it is perfect. Audio Clover representation Advertising techniques the most obvious audio that can be heard through out the advert is the music. The music used signs about how everyone loves clover and its because of how its churned, although it is also a advertising technique as it is almost subliminally telling you that you like clover as it sings 'everyone clover' and it may work as some people will not want to be excluded from the group of 'everyone' Advertisement Analysis The camera shoots vary quite a bit during this advert as it shoots different family's enjoying clovers product. The technique they have used here is to use as many different camera shots with as a varied amount of ages and races as possible to show that no matter you skin colour or age you can enjoy clover which helps broaden their target audience Camera Shots 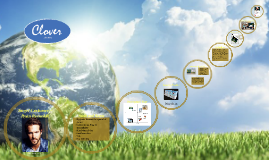 Transcript: 3 Ply pocket packets Aloe Vera lotion Hypoallergenic 100% recyclable Chlorine free $1.99 for package New Product Clover facial tissues are created to benefit both the environment and the consumer. it is made from 100% recycable content .Enriched with aloe lotion for that smooth feeling and tested to be hypoallergenic. It is small in size for easy storage and handy accessibility. Clover will be sold in as many possible convenience stores and supermarkets as we want our distribution to be intensive. Markets such as Food Emporium, and A&P supermarket in Bed ford. We also have it sold online for convenience for those with busy schedules. Retailers Our social media concept is on Pinterest because it has been gaining rapid popularity with its range of DIY crafts. Our advertisement on Pinterest is marketing more towards Blake Lively which will influence our target customer Ryan Reynolds. Generic Product Clover's advertisement will be featured in rider's magazine, a magazine that looks into all aspects of motorcycles Out-of-home advertisement Perceptual Map Clover tissues are durable, soft, great for sensitive skin, infused with aloe vera and the best part they are 100% recyclable ~ Aaron Rodgers Target Customer ~ Ryan Reynolds Hygienic Prevent the spread of germs Convenience: Ease in accessibility Handy travel size Gentle on skin Safe Eco-friendly rider magazine Our out of home advertisement is a billboard. The billboards are located near convenience stores and supermarkets near Bedford such as Food Emporium, and A&P supermarket. Needs and Wants "Ryan Reynolds, n.d.). Social media advertisement Our new product Our out of home advertisement Price: $ 1. 00 Print advertisement 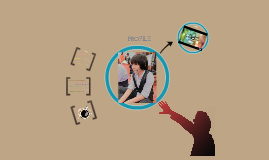 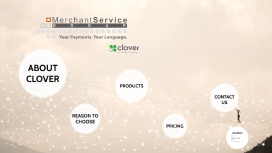 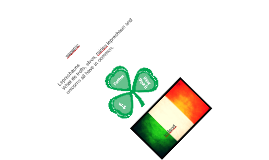 Transcript: Leprechauns What do trolls, elves, rairles leprechaun and unicorns all have in common. ireland sapatric