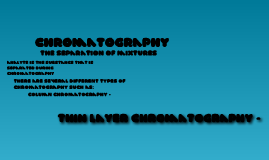 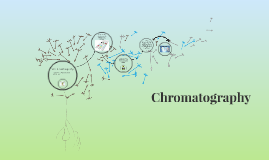 Transcript: If you like this experiment, you can try it with leaves Procedure 1. Cut out coffee filter and mark an ink spot at the tip 2. Poke your paperclip through the top of the filter 3. Dangle filter in the beaker 4. Fill beaker with water just enough to touch the tip of the filter 5. Wait and watch What is chromatography? A process used to separate molecules Chromatography We are testing which pigments will travel the furthest 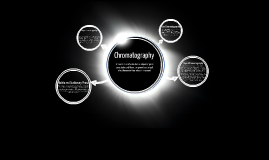 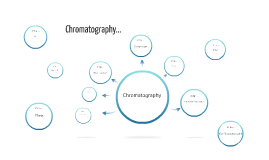 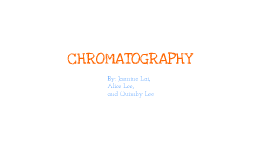 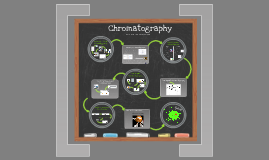 Transcript: Stationery phase: thin uniform layer or silica gel (SiO ) or alumina (Al O ) which has been coated onto a piece of glass or plastic Mobile phase: suitable solvent All markings made in pencil... why? Solvent moves up the plate via capillary action, carrying the deposited substances along with it at different rates Substances can be identified by their R values - ratio of the distance travelled by the substance to the distance travelled by the solvent up the plate. R = distance travelled by component distance travelled by solvent Distance travelled by the substances in the mixture depends on 1. how soluble it is in the solvent 2. how much it ‘sticks’ to the stationary phase. Colourless mixtures: fluorescent substance may be added to the stationary phase and then the plate viewed under UV light, or the substances can be made visible via a chemical reaction eg ninhydrin to show amino acids. Same principles as TLC Stationery phase: chromatography paper or high quality filter paper Mobile phase: suitable solvent Once mixture has been split via chromatography, the stationery phase is rotated 90 and Same principles as TLC however on a much larger scale Often used to purify substances stationary phase: silica gel or alumina, used to fill a column mobile phase: suitable solvent which is used to saturate the stationary phase in column Mixture to be separated is added to top of column Tap opened so that mixture is absorbed by the solvent As mixture travels down the column it is separated. Purified compound can then be collected. Compounds in the column can do 3 things: 1) condense 2) dissolve 3) remain gaseous In HPLC 'like attracts like'. Strange but true. Therefore... depends on 3 things: retention time 400 atm High Performance Liquid Chromatography Gas Liquid Chromatography waxy polymer compare retention time to pure sample Column Chromatography Used when substances appear to have similar R values with a particular solvent f mobile NOT permanent 2-way 3 what happens in here? 2 Now for the fun stuff ! Paper & Column Chromatography f silica Reverse Phase- area under peak = relative abundance f Amino acids = o Capillary action The yellow dye is the most ____ so is attracted to the stationary phase and slow moving, whereas the blue dye is ____ so is attracted to the mobile phase and is fast moving. GC-MS chromatography is repeated with a different solvent. M&M Chromatography liquid (with high bp) absorbed on solid partition UV Solvent is constantly added so column does not dry out High Performance Liquid Chromatography Paper Normal Phase- retention time output Purify A General Hello to Chromatogrpahy Gas Liquid Chromatography 2 mobile phase + stationary phase Thin Layer Chromatography inert gas 1) solubility 2) boiling point 3) column temperature Charlotte Smith, Tremaine Bilham & Lucy Simms Splat! 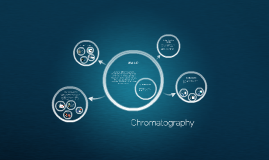 Transcript: In paper chromatography, there is a mobile phase and a stationary phase Testing athletes' urine for illegal drugs Chromatography is the physical separation of a mixture into its individual components. What is it? Separating different color inks from pens, markers Forensic scientists are able to use ink chromatography to solve crimes by matching documents or stains found at a crime scene to the marker or pen that belongs to a suspect. Forensic scientists analyze the unknown ink and compare it to writing utensils collected from possible suspects Uses What is it used for? Paper Chromatography Mobile Phase Can be used to separate the components of inks, dyes, plant compounds (chlorophyll), make-up, and many other substances How does this relate to solubility? These are all examples of mixtures that are PHYSICALLY combined! That means we can separate the individual parts of each mixture. Uses: What does it REALLY mean? Using chromatography to determine differences in chemical composition of types of crude oil Some types of chromatography a term for different laboratory techniques used for the separation of mixtures. It involves passing a mixture through a stationary phase, which separates it from other molecules in the mixture and allows it to be isolated. Gas chromatography Chromatography Liquid Chromatography Separating pigments in leaves Gel electrophoresis Solubility of the mobile phase Used to determine the chemical composition of unknown substances This is the machine used to complete this method (a chromatograph) the ink that is traveling... if its traveling up the paper, it's mobile, makes sense... Stationary Phase The part of the system that does NOT move... It allows the mobile phase to travel through it. Toxicology Which would be most soluble? How do you know? Solubility of markers We can use it to separate the components of inks and dyes, such as those found in pens, markers, and even candy shells. In addition, you can separate pigments in leaves and determine the chemical composition of many substances Uses: