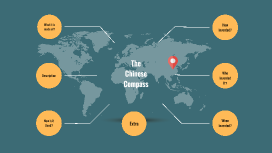 Transcript: The Chinese Compass When Invented Invented during Han Dynasty 220 B.C. Discovered naturally magnetized iron ore Also known as lodestone When Invented? Invented in Han Dynasty Not sure what individual made it Became common in Song Dynasty Took 700 years to become common Who Invented It? Who invented it? Magnetized lodestone placed on bronze plate Unrestricted lodestone points the same way Lodestone carved into spoon Lodestone is naturally magnetized Spoon would always face south How Invented? How Invented? What it is Made of: What it is made of? Iron Oxide A bronze plate https://www.google.com/url?sa=i&url=https%3A%2F%2Fenglish.cctv.com%2Fprogram%2Fnature%26science%2F20060109%2F101527.shtml&psig=AOvVaw1L5ECcrD1tb92yQTULVmyy&ust=1637686770480000&source=images&cd=vfe&ved=0CAwQjhxqFwoTCNC0jPi4rPQCFQAAAAAdAAAAABAO (Iron Oxide is also known as lodestone or magneta.) https://www.google.com/url?sa=i&url=https%3A%2F%2Fwww.gettyimages.com%2Fphotos%2Fancient-chinese-compass&psig=AOvVaw0j3Kq3XbiIrDbpqtMmEJUD&ust=1637686884169000&source=images&cd=vfe&ved=0CAwQjhxqFwoTCJjYsJ25rPQCFQAAAAAdAAAAABAF Description Iron is shaped into a spoon Flat pressed bronze plate Plate has main 4 directions Plate also has major constellations Some will have meaningful symbols Description How is it Used? Point of spoon will point south Compass kept harmony and showed wealth Used for fortune telling Good luck if building facing correct direction How is it Used? https://www.google.com/url?sa=i&url=https%3A%2F%2Fcommons.wikimedia.org%2Fwiki%2FFile%3AAntic_chinese_Compass.jpg&psig=AOvVaw2F5EnGN88fWro62DQcv5zd&ust=1637688093926000&source=images&cd=vfe&ved=0CAwQjhxqFwoTCKjd_-C9rPQCFQAAAAAdAAAAABAY Extra Extra 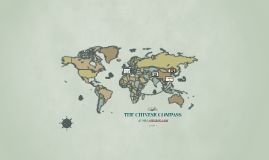 Transcript: THE CHINESE COMPASS How did it assist the people depending on the time and age? The Compass was originally made by the Chinese During the era of the Han Dynasty(2nd BCE- 2nd EC). A large spoon shaped instrument was cast in the center of a 'heaven plate' or diviner's board and had eight trigrams. ORIGIN THE CHINESE COMPASS As trading was very popular at the time, many of the Chinese couldn't go very far by sailing. The Young Chinese Scholars took action by discovering a form of magnetism. THE ONE AND ONLY ADAM ADAM ABISHEGAM 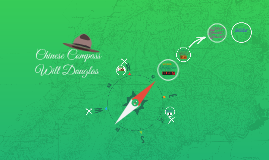 Transcript: MORE SOURSES WHEN IT WAS INVENTED THE DIFFERENT TYPES OF COMPASSES "The Magnetic Compass - Four Rivers Charter Public School." 2007. 2 Dec. 2015 <http://fourriverscharter.org/projects/Inventions/pages/china_compass.htm> Chinese Compass Will Douglas "Chinese Compass History: Invention, Dynasty and Navigation." 2013. 30 Nov. 2015 <http://www.learnchinesehistory.com/history-chinese-compass/> THE MAKING OF THE CHINESE COMPASS WHO WAS INVALVED "Chinese Compass History: Invention, Dynasty and Navigation." 2013. 30 Nov. 2015 <http://www.learnchinesehistory.com/history-chinese-compass/> THE CHINESE COMPASS WAS INVENTED BY THE HAN DYNASTY AND WAS LATER ADOPTED BY THE SONG DYNASTY FOR NAVIGATION THE CHINESE COMPASS WAS INVENTED IN 220 BCE THE USES OF THE COMPASS THE COMPASS WAS MADE BY CARVING LOADSTONE IN TO THE SHAPE OF A SPOON AND THE LOADSTONE IS PLACED ON A BRONZE PLATE SOURCES THE COMPASS WAS INDEED USED FOR NAVIGATION BUT IT IS SAID THAT IT WAS ALSO FORMAINTAINING HARMONY AND PROSPERITY WITH ONES ENVIRONMENT AND ALSO FOR TELLING THE FUTURE THE EARLYEST COMPASS WAS MADE OF LADSTONE AND MAGNETITE ORE TODAYS COMPASSES ARE MUCH DIFFERENT "Smith College Museum of Ancient Inventions: Compass." 24 Nov. 2015 <http://www.smith.edu/hsc/museum/ancient_inventions/compass2.html> 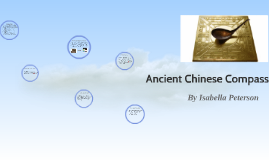 Transcript: They were made from lodestone that's fashioned into a spoon and sat on a flat, square-shaped plate made of bronze, which served as a representation of Earth. https://nationalmaglab.org/education/magnet-academy/history-of-electricity-magnetism/museum/early-chinese-compass Gunpowder, paper, printing, and the compass are sometimes called the Four Great Inventions of Ancient China. The first time the compass was mentioned in Ancient china was in 1086 bc which was about a century earlier than it was first mentioned in Europe. How was it made? http://www.encyclopedia.com/topic/compass.aspx Interesting Facts Sources When was it invented? It was invented around the year 206 BC Another thing that was happening in the year 206 BC was the ending of the Qin Dynasty. http://www.learnchinesehistory.com/history-chinese-compass/ By Isabella Peterson How was it used? Was originally used for maintaining harmony and prosperity with one's environment and for telling the future. The first time using the compass for navigation was during the Northern Song dynasty (960 CE - 1126 CE). Has it changed over time? The ancient chinese compass has a spoon or ladle and the handle that points south. Today's compass has a needle instead of a spoon and points north. Today's compass is also mostly used for navigation. Compass's are used all over the world today. http://www.travelchinaguide.com/intro/history/qin/ https://en.wikipedia.org/wiki/Compass Ancient Chinese Compass 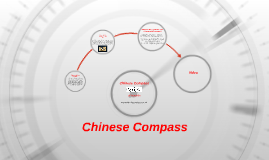 Transcript: What was the significance and influence of the compass? Chinese Compass Who invented the compass? The first compass was invented in Ancient China, during the Han Dynasty between the 2nd century BC and 1st century AD and they developed it in order to help with the Feng Shui practice. This practice involved aligning one’s self and others with the earth. The Ancient Chinese used the compass to help direct them towards a life of balance and oneness with the earth. It was used in military navigation by 1040 to 1044 and for maritime navigation by 1111 to 1117, during the Song Dynasty. People usually built early compasses using lodestone, a special form of the mineral magnetite that, as a natural permanent magnet, aligns itself with the Earth’s magnetic field. exhibits north-south polarity. Fashioned into the shape of a spoon or ladle, the lodestone sat upon a flat, square-shaped plate made of bronze, which served as a representation of Earth. In the center of the plate, was a large circle representing the Heavens appeared in which the lodestone was placed. This circle represented the Heavens. The lodestone spoon itself symbolized the constellation the Great Bear (also called Ursa Major), which contains the collection of stars known as the Big Dipper. Because of the properties of lodestone, the handle of the spoon always pointed towards the south. People used the Chinese compass as a navigational aid. Zheng He from the Yunnan province of China was the first person recorded to have used the Chinese compass as a navigational aid. He used it in his voyage between 1405 and 1433. Later, after a thousand years, Europeans and West Asians learned about the compass. William Gilbert then published a paper on magnetism, which is the main component of the compass. Navigators also use the compass to locate the magnetic North Pole. Then, in 1825, British inventor William Sturgeon invented a compass using the concept of electromagnetism. What did the compass look like? Video zhǐ​nán​zhēn By David Kiley and Scott Burk Chinese Compass 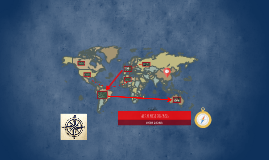 Transcript: Comparing and Contrasting - Past and Present Present day Compasses The Compass Thanks for watching!!!!! Diego Garcia The Chinese Compass The Compass' Scientific Relevance The Chinese Compass was scientifically relevant because it would soon revolutionize transportation, allowing people to orient themselves in the direction of their destination. A cooled iron needle rubbed with magnetite combined with a silk thread, water, or a plate or bowl, were the items used in the creation of the compass. The compass has helped humans for hundreds of years to find their way when they thought they were lost. The compass has enhanced our sense of position, as in knowing where North, South, West, and East are, and your current location on the planet. The compass has had a positive effect on humans because it has been a helpful navigation tool. A thousand years ago, compasses were were iron needles placed on a plate with markings. Nowadays,(*Sigh*) just open your compass app on your iPhone and it tells your coordinate cation. In the 2-3rd century, compasses were magnetized iron needles placed on a marked plate, floated in water, or hung from a string. Nowadays, everything is mobile, so compasses are an app or an actual circular compass . The way the compass has evolved over the last thousand years is extraordinary. It went from being a simple magnetized needle to a circular metal tool with the n,w,s,and e markings to a compass on a plane or an app on your iPhone. Chinese Compasses Bibliography By the Tang dynasty(7-8th century CE), the Chinese Compass was a needle rubbed with magnetite and suspended in water(early 11th century). Chinese scholars also noticed that when held in North-South directions, it became magnetic. soon the compass could be floated in water(Wet Compass), placed on a dried shaft(Dry Compass), or suspended from a silk thread. Later the plate was converted to a bowl, while retaining the markings of the heaven's plate(in a simplified manner). The compass was invented in 206 BC, by the Chinese(does not specify an inventor), in China. Mr. Jones "Chinese Inventions: compass" page http://www.whoinvented.org/who-invented-compass/ http://www.smith.edu/hsc/museum/ancient_inventions/compass2.html https://en.wikipedia.org/wiki/Compass http://education.nationalgeographic.org/encyclopedia/compass/ 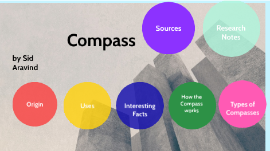 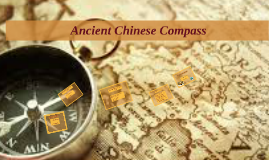 Transcript: What did they use before the compass? The future of the compass Constellations Landmarks It help people find their way instead of getting lost. Foggy nights Erosion Who would benefit from the Compass? Travelers Traders Why did they want to make this? Same Purpose Upgraded Ancient Chinese Compass It helps the user find a direction and not get lost. Instead of taking the chance and using land marks ( which are hard to remember ) they could use an accurate compass. What does it do?