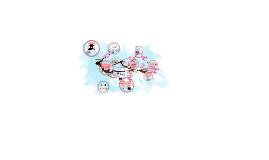 Transcript: Nigiri Sake Kana (Katakana) Naruto Maya the Bee is anime. Sailor moon By Marta Bakura class 2b (g) Manga is a comic book which reads from the back. Based on the Manga are anime. Romanji (Hiragana) is Latin and symbols. "Roma" - city in Italy "ji"- symbols Hiragana is rarely used by letter. (Domo Arigato) Anime is a type of animation style from Japan. It has a lot of story who knows the world. The most popular: Dragon Ball (800 episodes), Naruto (400 episodes), Attack on Titan, Tokyo Ghoul, One piece, Sailor Moon and Pokemon. Geisha is female who act as hostesses. Their skills include performing various arts such as classical music, dance, games and conversation. Geisha In Japan is: Premier (Yoshihiko Noda) and 14 Ministers. The last emperor was Akihito. Japan in total had 125 emperors. Language Ramen is a past with whole wheat flour. The most commonly eaten with eggs, fish, chciken and soy sauce The first voclaoid is Hatsune Miku. The characters create performers and concerts. The most popular soup is soup of Ramen. Premier's Symbol Vocaloid is the system of computer voices that the appearance of the characters. Kimono is a traditional suit and it's weight is 20 kg. Geisha must wearing special shoes and hairstyle. http://en.wikipedia.org/wiki/geisha http://pl.pons.com http://en.wikipedia.org/sushi htpp://vocaloid.center.org httpp://yatta.pl Japanese has two letters of syllable and one letter of symbols. The Japanese are written by Kanji, Kana and Romaji. Kanji (Han's symbols) - very populary letters in Japan. Made by Han's Monarchy. Bibliography Absolute authority over country The most popular food in Japan is Sushi. They have many kinds of Sushi: Sake Maki, Tekka Maki, Avocado Maki or Nigiri Sake. Music Japan is archipelago of 4 islands: Hokkaido, Honsiu, Sikoku, Kiusiu and capitalcity is Tokyo. Traditional Food Thanks for wathing. Vocaloid Hiragana and Katakana are 2 letters made in China and are very similar. Foregners learn their as the basic for this language. Japan Anime 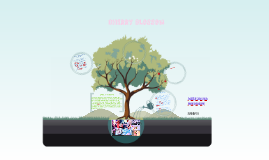 Transcript: A study by researchers at the University of Michigan Integrative Medicine Program found that a cherry-enriched diet helped reduce risk factors for heart disease and metabolic syndrome, also known as insulin-resistance syndrome or pre-diabetes. The study also found that diets high in cherries help reduce cholesterol levels, lower blood sugar and insulin levels, and raise the antioxidant capacity of the blood. food and or drinks that contain cherry blossoms The most common preparation of cherry blossoms is to salt-pickle the leaves or blossoms, and use them in sweets or tea. This gives the foods they are flavored with a unique flavor that is both flowery and salty. Sakura mochi is one of the most popular cherry-blossom desserts. It is very different from the popular Americanized mochi, which is usually filled with ice cream and flavored with vanilla or chocolate. Sakura mochi comes in a disc shape, enclosed by a salted cherry leaf. The mochi is not the fully mixed kind found in ice cream mochi, but rather roughly mixed mochigome (the type of rice used to make mochi), which is dyed cherry-blossom pink. Instead of ice cream, sakura mochi are filled with anko, or sweetened red bean paste. One of the more interesting cherry blossom-flavored foods is the sakura Kit Kat, which came out earlier this year to coincide with Hanami. The plantings of cherry trees originated in 1912 as a gift of friendship to the People of the United States from the People of Japan. In Japan, the flowering cherry tree, or "Sakura," is an exalted flowering plant. The beauty of the cherry blossom is a potent symbol equated with the evanescence of human life and epitomizes the transformation of Japanese culture throughout the ages. 1965: The Japanese Government made another generous gift of 3,800 Yoshino trees to another first lady devoted to the beautification of Washington, Lady Bird Johnson, wife of President Lyndon Baines Johnson. American-grown this time, many of these are planted on the grounds of the Washington Monument. Lady Bird Johnson and Mrs. Ryuji Takeuchi, wife of Japan's Ambassador, reenacted the planting ceremony of 1912. 1982: Approximately eight hundred cuttings from the Tidal Basin Yoshino trees were collected by Japanese horticulturists to retain the genetic characteristics of the trees and replace trees destroyed in Japan when the course of a river was changed. Other exchanges and gifts have benefited both cities. Through this cycle of giving, the cherry trees have fulfilled their role as a symbol and an agent of friendship. Results aikeshiyuna henderson 3/10/14 medical use in cherry's cherry blossom origin of plant 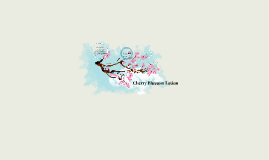 Transcript: Price: $6.99 Product: Smells like the cherry blossom flower. Makes your skin very soft and smooth. Takes away dryness and can last for 12 hours before needing to reapply. It is both a hand and body lotion. Demographics: female, teenagers and have an average income level Geographics: USA in a mid-sized town Psychographics: feminine, looking for their smell to compliment their personality, clean, crisp, and whimsical Target Market New Product Cherry Blossom Lotion This is our new skin care product called Cherry Blossom. Many customers have been interested in the product, but sales are still low. Today I will be giving you extra information about the product and will inform you how to handle objections. Cherry Blossom Lotion Promotion To make Cherry Blossom successful we need to give the customers the right amount of information. This product is for young women who are whimsical and want to smell floral. This product is a dermatologist approved product that makes your skin soft and smooth. Finally the product is only available during the spring season. Example: Why does this product smell so fragrant? Answer: The product is so fragrant because it is geared towards whimsical teenagers. Example: Why is the price so high? Answer: The price is so high because it is a dermatologist approved product for teenagers who care about their skin. only available during the spring season Dermatologist developed, tested, and recommended. Suitable for all skin types(oily, dry, normal, and sensitive). It is a non-greasy and oil-free product. The product is Naturally Better, Effective, Soothing, and Confidence Building Handling Objections Conclusion 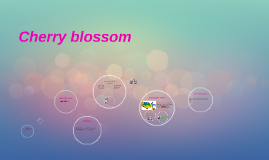 Transcript: Spring Autumn Scientific name Prunus serrulata Spring A cherry trees root serves critical functions. It pulls water and nutrients from the soil and directs them upward so that they can feed the trunk, stems, leaves flowers and fruit of the tree. cherry blossoms Habitat Autumn It has warm, sunny days and cool, clear nights the cherrys need approximately 700 to 900 total hours of chill or temperatures of 45 degrees Fahrenheit or less cherry blossoms do grow fruit but it is very small The approximate time located in range Ecological importance the small cherrys on the tree are food source for small birds and mammals Geographic range Summer Winter use's Winter Its location is in Japan its over 1500 years old and it was planted by Emperor Keitai seeds Root system They grow and the wind spreads the seeds They are not only used for fragrance and color during blooming season, but their blossoms are also used to add flavor and color to food and beverages.they also plant them along the sidewalks for shade and looks Summer Pictures The tree each season cherry blossoms are deciduous trees seeds and fruit cherry blossoms are usually found in Japan, but they can also be found in Korea, china, India, Canada, Germany, philippines, United Kingdom, and the United States Weather conditions cherry trees prefer soil with PH levels between 6.o and 6.8 . seed dispersal Cherry blossom

Transcript: A cherry blossom is the flower of any of several trees of genus Prunus, it is speculated to be native to the Himalayas.Currently it is widely distributed, especially in the temperate zone of the Northern Hemisphere including Europe History of Cherry Trees in Vancouver Vancouver Cherry Blossom Festival Cherry Blossom Information about cherry blossom For more than sixty years, Vancouverites have enjoyed a love affair each spring with the soul-stirring flowering plum and cherry trees that line streets and grace parks. When is the Vancouver Cherry Blossom this year? March 24-April 17, 2016 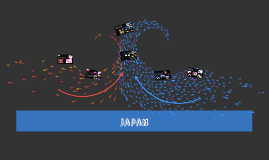 Transcript: There are over 90,000 species of animals in Japan. Its body is 14–20 cm long and the tail length is 10–14 cm. It weighs 150–220 g.It is nocturnal, and during the day it rests in holes in trees. It eats seeds, fruit, tree leaves, buds and bark The red panda is slightly larger than a domestic cat (55 centimeters long), with semi-retractable claws. It has reddish fur, white face markings, and a bushy tail with six alternating yellowish-red transverse ocher rings. The red panda is native to the Himalayas in Nepal and southern China. Flying Squirrel Plum Blossoms usually bloom in mid February to March.Japanese tradition holds that the ume functions as a protective charm against evil, so the ume is traditionally planted in the northeast of the garden, the direction from which evil is believed to come. Plum blossom came to symbolize perseverance and hope. Japan's Cherry Blossom Cherry Blossoms usually blossom in late March to mid April. This flower is one of the most popular flowers of Japan.It is also the national flower of Japan. It signifies spring and new academic year of schools.The cherry blossoms are symblols of a bright future. Tokyo it is pronounced 'hooper' swan Whooper Swan Japan Wisteria trees bloom to late April to early May.The vines run about 30 ft up into tall pine trees and the wisteria "trunk" is about 8 inches across! Tokyo is world's most populous metropolis. Tokyo is the capital and largest city in Japan with over 13 million people. It was named first named Edo from being a small fishing village in the early 1400’s The name Tokyo means Eastern Capital.. Five of the top 25 amusement parts are in Tokyo. Tokyo has the largest metropolitan economy worldwide, Red Lesser Panda Oji Moss Pink and Wisteria Trees Animals From Japan Japan Moss pink ( shibazakura), is a flower that grows close to the ground in brilliant colors of magenta, pink, and white. The season for moss pink, which is from late April to mid-May, comes after the more well-known cherry and peach blossom season in Japan. Japan is an island nation in East Asia. Located in the Pacific Ocean, it lies to the east of the Sea of Japan, China, North Korea, South Korea and Russia, stretching from the Sea of Okhotsk in the north to the East China Sea and Taiwan in the south. Flowers 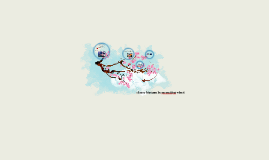 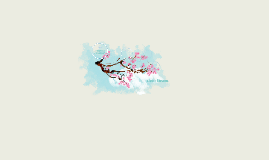