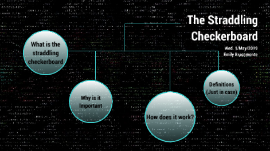 Transcript: The Straddling Checkerboard Wed. 1/May/2019 Emily Bracamonte What is the straddling checkerboard It is a type of cipher code that is used to convert an alphabet to numbers In this case, the substitutions are of variable length. When this cipher is combined with other methods of encryption, the straddling checkerboard can be quite strong It is a Substitution Cipher What's so important about it? Why is it Important It has formed a component of several important field ciphers, the most notable being the VIC cipher used by Russian spies during the cold war. This cipher can be very strong when joined with other ciphers as mentioned before. This can be helpful when trying to send a message in the best way possible without any other people trying to encrypt it without permission. Steps on how the Straddling Keyboard works How does it work? Remember Step 3 Step 4 Remember... We will be left with just a simple substitution. Not every key will be able to decrypt every message, e.g. the example keys above cannot have 38, 39, 78 or 79 in the cipher text. Every key will have a set of numbers that it cannot decrypt. If these numbers occur in the cipher text, we know the key can't have been used to encipher it, so we can get rid of the key. It turns out that we don't need to check all the positions of the second 2 blanks, as soon as we find a set of positions for them that work we can just use it, as they all give equivalent substitution ciphers. Only the positions of the first 2 blanks matter. Step 1 Step 1 The key for a straddling checkerboard is a permutation of the alphabet e.g. 'fkmcpdyehbigqrosazlutjnwvx', along with 2 numbers e.g. 3 and 7. A straddling checkerboard is set up something like this The first row is set up with the first eight key letters, leaving two blank spots. It has no row label. The second and third rows are labeled with whichever two digits didn't get a letter in the top row, and then filled out with the rest of the key letters. Since there are 30 slots in our grid, and we missed two letters in the first row, there will end up being two spare in the other rows. It doesn't matter where these spares go. Step 2 Step 2 To encipher, a letter on the top row is simply replaced by the number labeling its column. Letters on the other rows are replaced by their row number, then column number: So, DEFEND THE EAST WALL OF THE CASTLE becomes 690975672309938377275387070360723094383772709. This may be sent directly, but usually is first input into a second cipher stage, such as a substitution or transposition step which will be shown in the next slide. As a simple example, we will add a secret key number, such as, 83729, using non-carrying addition: Step 3 Then use the same straddling checkerboard to turn it back into letters: The final cipher text is then CMUDMECCMYMDPUFCCDOPEEPHYEPPFMYMDPPDPPCMY. Note that it is a different length compared to the original plain text. Deciphering is simply the reverse of this process. Although the size of groups can vary, deciphering is unambiguous because whenever the next element to be deciphered starts with a 3 or a 7, it is a pair; otherwise, it is a single letter. Step 4 Definitions just in case... Definitions (Just in case) Cipher- a secret or disguised way of writing a code. Encrypt- convert info or data into a cipher or code, especially to prevent unauthorized access. Decrypt- make a coded or unclear message intelligible. Key- clues/sequence used to encrypt/decrypt a message or code. 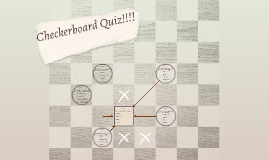 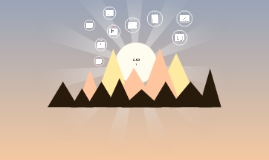 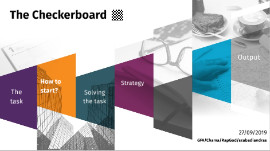 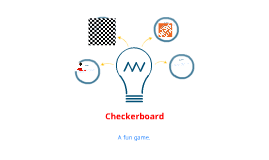 Transcript: They would have chess and checkers pieces. We will have THS engrave it. Location It will have permanent black and teal. Each a gallon of paint. Both are about 30$. They are going to be snap together pieces. Funding Pieces Design We will have it between Harrison's and Weaver's room. It will be big enough to fit. A fun game. We will have some kind of bake sale or fundraiser. We will be fortunate enough if Home Depot donate to us. Checkerboard 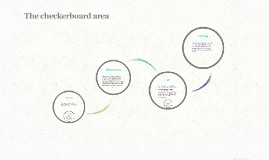 Transcript: The characters connect with the events because they are the ones moving the sheep in case of attacks and to not kill the grass. The attacks related because they scared the coyote off. They were the one who killed the porcupine for it's sweet meat. Image by Tom Mooring The setting in the second chapter is in the checkerboard area New Mexico. It is a desert area with grasses where the heard there sheep and no clean water except wells. It is all related because the desert area was home to the porcupine and coyote. Since it was their home, they killed the porcupine and scared off the coyote. They grazed the sheep and since was a desert they had to move on a lot for more grass and to not kill the grass. The checkerboard area all The main characters in this is Chester, Dora, Coolidge, Old Auntie, Young Auntie, Grandma and Uncle. They are related to the settings because that was where they lived and how they grew up. How the setting relates to this is they graze the sheep so that there is grass in that area. The porcupine is a animal that lives in the desert and taste good so they killed it for the meat. The coyote is a desert animal so he attacked the sheep for food. setting/events There are three events. 1) the coyote biting the lamb 2) grazing sheep 3) Killing the porcupine. Characters related Events Setting