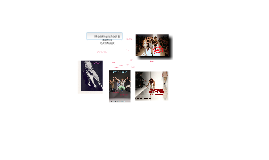 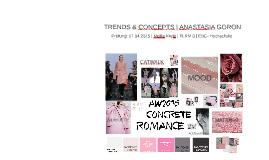 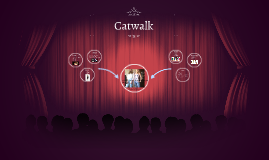 Transcript: Model Lotte and Alessia. Clothing desing Showing Mark catwalk What is T-shaped stage? What is Mannequins? What is Chanel and louis Vilton poses sculpture person What is the catwalk. Model. Fashion. Fashion walk. Style Dresses Designers Fashion Catwalk Fashion Walk Introduction http://www.bing.com/videos/search?q=catwalk%20kort%20filmpje&qs=n&form=QBVR&pq=catwalk%20kort%20filmpje&sc=0-10&sp=-1&sk=#view=detail&mid=8F4B0C110B1F8FAE92758F4B0C110B1F8FAE9275 This was our presentation, i hope you liked it. Movie 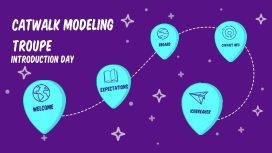 Transcript: Catwalk Modeling Troupe INTRODUCTION DAY WELCOME WELCOME THE VERY FIRST MODELING TROUPE ON THE CAMPUS OF KUTZTOWN UNIVERSITY! ABOUT Us At the end of every year, around april, We have a fashion show at the school to show off everything we have been work for in practice. 6-7 Designers will come to our show and we will model their clothes on a runway in front of a crowd. We also include dancers, step teams from other school and even poets that come and perform also. https://www.instagram.com/p/B2QPNlRAWjW/ https://www.youtube.com/watch?v=F_s-cxwGwkI Practice Sundays Thursdays 7pm - 9m where confidence is born 12pm- 3pm Girls: Dress in comfy clothes and clothes you don’t mind messing up Heels are required Guys: Also comfy clothes and sneakers What we expect expectations We want you to enjoy what you're doing at all times and if there is ever a problem please be verbal and speak up! LIST OF RULES LIST OF RULES 1 4 3 2 5 Work hard at practice but also have fun while doing so BE CONFIDENT Remember that we are a family at the end of the day. Promote beauty no matter what you look like Real fashion designers look out for us (Stand out and Practice!) Eboard Eboard Members The ones who make it happen Aliyah ALiyah President Senior Criminal Justice Major Maya Vice President Senior Criminal Justice Major Maya Krystal Secretary Senior Communication Design Krystal Ana ANa Treasurer Junior Criminal Justice elizabeth Parliamentarian Senior Sociology elizabeth Sabrina Model Coordinator Junior Political Science Sabrina If you need anything or have any questions contact info contact Info Contact Info Aliyah Benjamin - (570) 817- 6159, abenj885@live.kutztown.edu Maya Rojas - (219) 771-4551, mroja703@live.kutztown.edu Krystal Honohan- (610) 858- 3629, khono867@live.kutztown.edu Elizabeth Mollo- (607) 765- 2542, emoll470470@live.kutztown.edu Ana Cruz- (484 838-9958, acruz916@live.kutztown.edu sabrina nunez-(570)-540-1810, snune258@live.kutztown.edu Icebreaker ICEBREAKER NAME My name is... Fun Fact 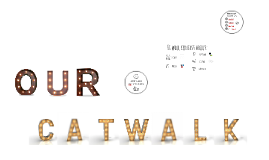 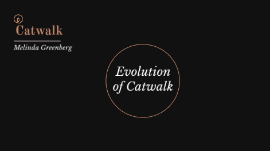 Transcript: Catwalk Melinda Greenberg Evolution of Catwalk "Fashion Parades" Fashion shows have largely been influenced by the French. In the 1860s, Parisian-based designer Charles Frederick Worth introduced the idea of presenting collections on live models at the Longchamp Raceway. Today, he has been credited as the “father of haute couture”. Fashion shows have evolved over the centuries from being somewhat humble to something very public and large scale. “Fashion parades” really started to become more popular in the early 20th century. Among one of the leading designers was British designer Lady Duff-Gordon who regularly showed collections at her Hanover Street salon. In 1956, the pioneering designer Gaby Aghion, who founded Chloé, invited press to the Café de Flore in St Germain to view her first collection. It was an informal presentation of her designs at the that brought the models into an everyday cafe setting, away from the controlled environment of the designer’s salon. In the 1960s, society was very fearful of spies and therefore, fashion shows remained closed affairs. Humble Beginnings Catwalk Fashion shows require a large runway connected to a stage and seating for the audience. Typically, the stage functions solely as a place to connect back stage to the runway. Catwalks can also be arranged in a “T” shape with extra space at the end of the runway for multiple models. Photographers are often seated at the end of the runway so that they can capture a long-lens shot, on the side and near the start of runway for a return shot. The best view of the stage is from the end of the runway before the camera and the best seats are in the first row. Typically, the most important guests are seated in the first rows. At the back of the catwalk is the set design, which serves as the backdrop of the performance. A fashion show is typically accompanied by a set of slides, projecting the logo and credits, as well as images, colors and designs that enhance the concept of the show. Catwalk Breaking the Norm Runways Program Paths in Cities 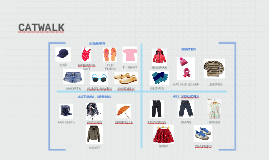 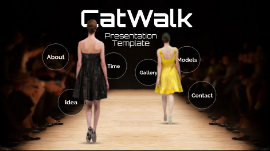