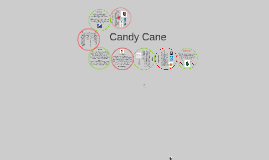 Transcript: Countries that i found that manufacture and produce cellophane include Japan and China so depending on where the candy cane companies operate the cellophane they use could be from either of those countries. Candy Canes Card board Packaging Ingredients: Batch rollers. Candy cane company get there packaging from design company's that make their boxes for them. Company's like this include Beneco custom print and packaging, Instabox, or Arrow Box packaging. The countries that manufacture/ produce the most card board/ packaging includes China, the United states, Japan, Germany and Canada. You all know the candy cane, its a very tasty Christmas candy, today we are going to tell you about how its made. Sugar Machine producing countries Top producers of card board boxes/ packaging The worlds top 5 suppliers of sugar: Brazil with 37.8% of the worlds total India with 19.6% China with 6.9% Thailand with 5.4% and Pakistan with 3.2% The worlds top producers of Corn syrup include the United states, China, Brazil, Mexico, and Indonesia. The Corn syrup that candy cane manufacturers use could be imported from any of these countries or any other countries that export corn syrup. Corn syrup Countries that sell Cellophane Process. The worlds top producers of water include Brazil, Russia, Canada, United states, or Indonesia. So their water supply could be from these countries. Cellophane is mainly produced in Japan and China so depending on the supplier of the candy cane company, the cellophane they use could be from there. x A LOT Machines they use: Countries that manufacture and export machinery include: China with 21.1% total world production Japan with 18.2% Germany with 18% Italy with 7.2% and South Korea with 7.1% They get their water from indoor plumbing that is inside their factory or place of operation, rather then having to bring it in from an outside source. These Machines are most likely ordered from a custom design company then made and sent to them or bought already made. Candy cane manufacturing companies get their sugar from local suppliers who can give them the amount that they need. Cellophane Corn syrup is a natural sweetener used in baking. Candy cane manufacturers buy their corn syrup from shipping/ warehouse supplier companies because they can give large amounts. Producers: -Pounding/ mixing machine -Slab rolling machine -Automated pullers -Batch rollers -Angled blades and timed cutting blades. -Cellophane roller -Multiple heaters -Robotic arms Quality control Cellophane is a clear packaging material that Candy cane Manufactures use to wrap the candy canes in. Water Candy Cane To make a candy cane you mix corn syrup,sugar and water then add starch mixed with flavoring like mint, strawberry, or blueberry. Quality control for candy canes include making sure that all the ingredients used are fresh and not contaminated to insure good quality candy canes. They also must make sure that the equipment is clean and sanitary and working properly. Automated pullers. 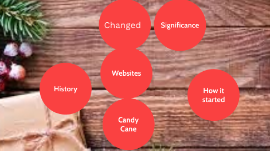 Transcript: Changed Candy Cane Candy Cane History of Candy Canes History The first candy cane was not made in the shape of a cane. It was white, completely straight and only flavored with sugar. Legend has it that in 1670, the cane shaped candy became historical when a choirmaster at the Cologne Cathedral in Germany bent the sugar-sticks into canes to appear as shepherd's hooks. started to keep people quiet How it started How it started Changed originally strait changed to look like a shepherds hook when I need something minty in the winter I can always eat a candy cane Significance Significance Invention of Candy Cane - Candy Cane History Websites 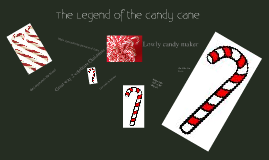 Transcript: The Legend of the Candy Cane First made in Indiana Lowly candy maker Represents staff of the shepard And the J in Jesus Red represents the blood White represents the pureness of Jesus Great way 2 celebrate Christmas 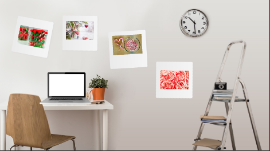 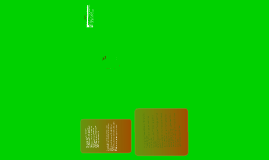 Transcript: The Candy Cane Where Does It Come From? Fast Facts Goes back 350 years National candy cane day is celebrates on December 26 in the United States. original candy was straight and completely white in color. Over 1.76 billion candy canes are made each year. The biggest candy cane ever made was 36 feet 7 inches. Christmas cards after 1900 showed illustrations of striped candy canes. candy-makers added peppermint and wintergreen flavors to their candy canes Nearly 2 billion candy canes will be sold in the four weeks before Christmas and Hanukkah. This Food Is used today by: Putting them in hot chocolat Adding to cakes Putting the flavoring in chocolat Different flavoring in the candy canes not just pepermint Different kinds of pepperment candies are also inspired by the candy cane Nutrients Pop Size: 4.50 oz % DailyValue Serving Size: 1/8 stick (15 grams) Calories: 59 Total Fat: 0 grams 0% Trans Fat: 0 grams n/a Sodium: 0mg 0% Total Carbs: 15 grams 5% Sugars: 12 grams n/a Protein: 0 grams n/a Ingredients: Sugar, Corn Syrup, Natural Flavor, Color Added (Includes Red 40). Store in a cool dry place. This product does not contain peanuts, tree nuts, milk, eggs, wheat, soy, or gluten. It has been manufactured on dedicated equipment. There is a trace amount of soy oil in the lubricant that we use in our cooking kettles. This soy oil has been refined, bleached, and deodorized and all of the proteins have been removed. Myths Many years ago, a candy maker wanted to make a candy at Christmas time that would serve as a witness to his Christian faith. He wanted to incorporate several symbols for the birth, ministry and death of Jesus. He began with a stick of pure white hard candy; white to symbolize the Virgin Birth and the sinless nature of Jesus; hard to symbolize the solid rock, the foundation of the Church; firmness to represent the promise of God. The candymaker made the candy in the form of a "J" to represent the name of Jesus, who came to earth as our Savior. He thought it could also represent the staff of the Good Shepherd, with which he reached down into the ditches of the world to lift out the fallen lambs who, like all sheep, have gone astray. . Thinking that the candy was somewhat plain, the candymaker stained it with red stripes. He used three small stripes to show the stripes of the scourging Jesus received, by which we are healed. The large red stripe was for the blood shed by Christ on the cross so that we could have the promise of eternal life. Unfortunately, the candy became known as a candy cane - a meaningless decoration seen at Christmas time. But the true meaning is still there for those who have eyes to see and ears to hear. Sources http://www.fatsecret.com/calories-nutrition/lifesavers/candy-canes http://inventors.about.com/od/foodrelatedinventions/a/candy_canes.htm http://www.alighthouse.com/candycane.htm http://www.candycanefacts.com/facts/ http://www.noelnoelnoel.com/trad/candycane.html The shape The stripes The coloring The candy The taste Now who wants some candy canes? They become what we see and use today. 1950's By Felicia Mykes 1670 1990's Bob’s brother-in-law, Gregory Keller, a Catholic priest, invented a machine to automate candy cane production. 1920's Bob McCormack began making candy canes as special Christmas treats for his children, friends and local shopkeepers in Albany, Georgia. German-Swedish immigrant named August Imgard of Wooster, Ohio, decorated a small blue spruce with paper ornaments and candy canes. 1847 The choirmaster at the Cologne Cathedral handed out sugar sticks among his young singers to keep them quiet during the long Living Creche ceremony. 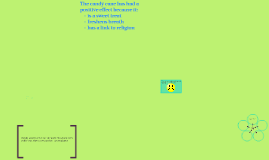 Transcript: Some Candy makers made the candy cane in about 1650. Since the original candy cane stripes colors, flavors, the curve and different sizes have been added. The area of technology, Production, best classifies the candy cane. The candy cane has had a positive effect because it: is a sweet treat freshens breath has a link to religion Candy canes can lead to cavities and sharp candy canes can injure people. The Candy Cane. Bibliography: Prezi by: Hannah and Paige How has the candy cane impacted society in a positive way? Creating something that children like Science: Math: Technology How is it used today? How was it used when it was originally made back then? How has the candy cane impacted society in a negative way? What are some of the innovations the candy cane has gone through? Engineering Any Questions Designing a candy that tastes sweet Who invented it? The Candy Cane Example: http://inventors.about.com/od/feedrelatedinventions/a/-candy_canes.htm The discovery that sugar combined with other substances can make candy. Finding ideal the size, shape, and color People used to eat it and decorate Christmas trees with them. The same way they use it today!!!!! 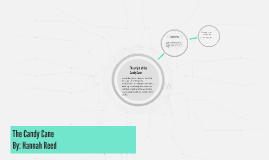 Transcript: The Candy Cane By: Hannah Reed Meaning Candy Canes were created as a Christian symbols representing the blood and purity of Jesus Christ. According to folklore, in 1670, in Cologne, Germany, the choirmaster at cologne cathedral, wishing to remedy the noise the children made and he asked the local candy maker to make sweet sticks. The origin of the Candy Cane It is 344 years old How old is the candy cane? 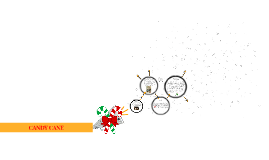 Transcript: Sweet Secrets of the Candy Cane CANDY CANE The first historical reference to the familiar cane shape goes back to 1670, when the choirmaster at the Cologne Cathedral in Germany, bent the sugar-sticks into canes to represent a shepherd's staff. The all-white candy canes were given out to children during the long-winded nativity services. Origin The origin of the candy cane goes back over 350 years, when candy-makers both professional and amateur were making hard sugar sticks. The original candy was straight and completely white in color. About fifty years later the first red-and-white striped candy canes appeared. No one knows who exactly invented the stripes, but Christmas cards prior to the year 1900 showed only all-white candy canes. Christmas cards after 1900 showed illustrations of striped candy canes. Around the same time, candy-makers added peppermint and wintergreen flavors to their candy canes and those flavors then became the traditional favorites Origin The Stripes There are many other legends and beliefs surrounding the humble candy cane. Many of them depict the candy cane as a secret symbol for Christianity used during the times when Christian were living under more oppressive circumstances. It was said that the cane was shaped like a "J" for Jesus. The red-and-white stripes represented Christ's blood and purity. The three red stripes symbolized the Holy Trinity. The hardness of the candy represented the Church's foundation on solid rock and the peppermint flavor represented the use of hyssop, an herb referred to in the Old Testament The first historical reference to the candy cane being in America goes back to 1847, when a German immigrant called August Imgard decorated the Christmas tree in his Wooster, Ohio home with candy canes. Origin