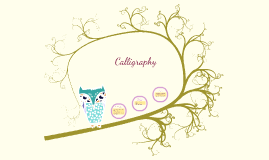 Transcript: Flat-edged pen replaced by steel pen and fountain pen http://flourishandwhim.com/ Western/Roman Arabic Chinese/Oriental Calligraphy How did it start? Originated around the Stone Age Then the Egyptians Next the Phoenicians Followed by the Greeks and the Romans Other facts Three types of Calligraphy 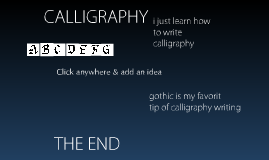 Transcript: CALLIGRAPHY i just learn how to write calligraphy gothic is my favorit tip of calligraphy writing THE END Click anywhere & add an idea 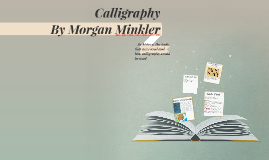 Transcript: ...its history, the tools that were used and how calligraphy would be used. Calligraphy has been going on for over 4000 years! Calligraphy is a primary part in the four traditional arts. In 221 BC – 206 BC with the help of his followers, Prime Minster Li Si helped raise awareness of this form of writing. During 25 - 220 in the Han Dynasty improved on the original idea of Calligraphy and made it cleaner and more intricate. Calligraphy Uses Tools Used Calligraphy played a great role in ancient times. You were essentially judged on the way your writing looked. everyone from children of high officials to the emperor himself had to learn calligraphy. Not only was calligraphy important in communication and writing, but also served as a form of reflection. The earliest of these brushes are estimated to be from around 476 BC- 221 BC. These brushes of course differ in texture, a result of being made of different hairs in the tip of the brush. The shaft of the brushes also vary. Ink Stick: Ink Sticks have been made from pine soot since the Han Dynasty and have always been crafted with care. Paper: Before Cai Lun made people recognize paper there were many other different methods; such as writing on silk and bamboo, but none of these other techniques were as efficient. Ink Slab: Originally were widely used as writing platforms (practical) and then later became more artistic works (decoration.) Writing Communicating official government laws Responding to test questions Making more organized lists Art forms Fun Fact: To become a calligraphy specialist you have to practice until it becomes innate. Example of Calligraphy of Ancient China History of Calligraphy There are four basic tools needed in calligraphy, a writing brush, ink stick, paper, and a ink slab. Writing Brush: Calligraphy By Morgan Minkler 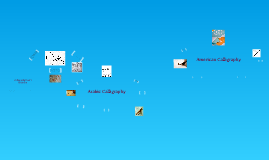 Transcript: An expression of harmony as perceived by a particular civilization. The calligrapher is in harmony with his script, his tools, the text and his own spiritual heritage. Art of beautiful, stylized, or elegant handwriting or lettering with pen or brush and ink. Derived from the Greek words for “beauty” (kallos) and “to write” (graphein). Rooted in the development of written symbols and letter forms over thousands of years, from the earliest scratchings in dirt, cave painting and pictograms to the great classical inscriptions, Medieval, Renaissance and Baroque manuscripts. The development of letterforms continued through the use of engraving and other technologies, and in the forms of typefaces used in printing, from the mid-fifteenth century up to the present. Before the invention of the printing press, it was the way books were made. Most commonly used vellum or parchment and wrote with a quill. Calligraphy Hasn't Died Out Influential to other relevant topics: book design, manuscript books, book binding, typeface design, logo design, sign making, handwriting, calligraphy as illustration, calligraphy as artistic expression Printing and handwriting began to influence each other Arabic Calligraphy Language was a principle factor in uniting people who differed widely. Arabic calligraphy is considered a major art form, equal to sculpture or painting It was evolved by the 6th century. Earliest surviving examples are inscriptions on stone. They write right to left and only have 17 characters, no capitals. Use a reed pen and have a thick downstroke and thin upstroke Arabic calligraphy is mainly utilitarian and was not trampled with the invention of the printing press It is still often used in everyday writing. American Calligraphy The word calligraphy didn’t appear in the English until 1613 The plainer Greek- and Latin-derived alphabets and the spread of literacy have tended to make handwriting in principle an art that anyone can practice Write left to right, have 26 characters and capitals More of a popular art form than utilitarian Not used in everyday writing More likely to use a manufactured pen as opposed to a reed pen 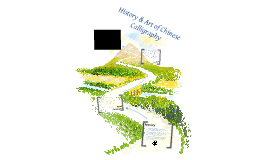 Transcript: History & Art of Chinese Calligraphy Art Of Calligraphy Calligraphy, literally "beautiful writing," has been appreciated as an art form in many different cultures throughout the world, but the stature of calligraphy in Chinese culture is unmatched. In China, from a very early period, calligraphy was considered not just a form of decorative art; rather, it was viewed as the supreme visual art form, was more valued than painting and sculpture, and ranked alongside poetry as a means of self-expression and cultivation. The earliest extant examples of Chinese writing are the inscriptions that appear on so-called oracle bones (animal bones and turtle shells) and on bronze vessels, the oldest of which date back to the Shang dynasty (ca.1600-ca.1100 B.C.E.). The Chinese written script is made up of several thousand individual graphs. Each consists of an invariable group of strokes executed in a set order. One of the truly unique features of calligraphy that results from these apparently restrictive guidelines is that the viewer is able to mentally retrace, stroke by stroke, the exact steps by which the work was made. The viewer also is able to observe extremely subtle nuances of execution-where a stroke was made swiftly or slowly, whether the brush was put to the paper with great delicacy or force, and so on. The ink employed in calligraphy is usually made from lampblack, a sooty residue created by burning pine resin or oil underneath a hood. After being collected, the lampblack is mixed with glue and then pressed into molds. The resulting hardened cakes or sticks can then be ground against a stone and mixed with water, a process that allows the calligrapher to control the thickness of the ink and density of the pigment. Eventually ink cakes and ink sticks themselves became a decorative art form, and many well-known artists created designs and patterns for their molds. History About Calligraphy 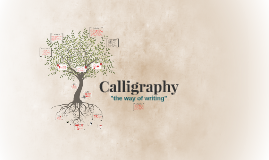 Transcript: Gyosho and Sosho Its uses range from functional inscriptions to fine art pieces. from Ancient Greek meaning "beauty" and "writing" this is the square style of writing the strokes must be drawn in a certain order cursive style History continued... Sosho Gyosho The design of lettering in one stroke using a brush Supplies needed Religion At this point it became acceptable for Japanese literature and calligraphy to deviate from traditional Chinese aesthetics. Fude: Brush larger brush for writing the main characters smaller one for writing the artist's name Japanese calligraphy has its roots in Zen Buddhism Much of what the West admires as Japanese art can be traced to Zen influences Calligraphy Suzuri: Heavy black container for the ink. Sumi: Solid black material that is rubbed in water to produce the black ink used for writing. "instant ink" in bottles is also available. Bunchin: Metal stick to weight down the paper during writing. Hanshi: Special, thin calligraphy paper. Calligraphy Kaisho Kaisho Supplies continued... The first truly unique Japanese style was invented in the 10th Century. This style was called "wayoushodo," meaning Japanese writing style. It was brought about by Ono No Michikaze. this is the original style less formal way of writing than the Kaisho style faster and easier than Kaisho Supplies continued... "the way of writing" Bibliography History continued... Shitajiki: Black, soft mat. It provides a comfortable, soft surface. Religion Japanese calligraphy began from importing the Chinese writing system in 5th Century C.E. Because of the two unique languages and linguistics however, new characters were created. History semi-cursive style To write Zen calligraphy with mastery, one must clear one's mind and let the letters flow themselves, not making tremendous effort This stresses a connection to the spiritual rather than the physical Supplies continued... http://www.japan-guide.com/e/e2095.html http://en.wikipedia.org/wiki/Calligraphy http://www.beyondcalligraphy.com/japanese_calligraphy.html http://www.onmarkproductions.com/html/calligraphy1.shtml https://www.boundless.com/art-history 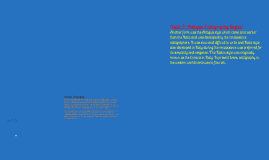