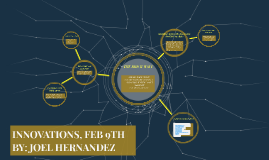 Transcript: BE SELFISH FOR A LITTLE WHILE THIS IS YOUR IDEA YOUR PROJECT YOUR PASSION YOUR FUTURE BUSINESS ACCORDING TO OUR TEXTBOOK "LATERAL ACTION" It ainʼt about how hard you hit. Itʼs about how hard you can get hit and keep moving forward; how much you can take and keep moving forward. Thatʼs how winning is done! (Rocky Balboa, 2006) WE ALL HAVE THEM!!! WE HIT THAT CREATIVE WALL AND CAN NOT SEEM TO GET PASSED IT WHAT CAN WE DO? TAKE INVENTORY OF WHAT YOU HAVE LEARNED DURING THIS PROJECT OR ONES BEFORE IF YOU ARE HAVING SOME OTHER ISSUE THAT IS IMPEADING YOUR PROGRESS LET GO OF IT IF ALL ELSE FAILS WALK AWAY COOL OFF AND COME BACK FRESH THE BRICK WALL TAKE BACK CONTROL INNOVATIONS, FEB 9TH BY: JOEL HERNANDEZ LET GO OF YOUR OLD SELF WHAT HAVE YOU LEARNED? GIVE YOURSELF TIME DO IT FOR THE HELL OF IT BECAUSE THIS IS YOUR PROECT HAVE SOME FUN WITH IT AND ENJOY WHAT YOUR CREATING 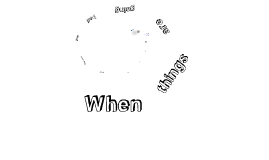 Transcript: When things are going bad and everything spirals out of control but if you change the perspective Theres up Then your just being lazy and laying down untie the strings one you hit the wall way Pick yourself up only 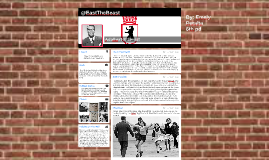 Transcript: #Reunited Work Communist Opportunist ( As a guard I was forced to adhere to Communist laws and portray unwavering support, but I personally also believe in a free market where one can advance their position) I lived in East Berlin and I currently live in Germany Immediately after the collapse of the wall, I quickly found my sister Abygail who had found refuge with the owner of a popular theater near the wall. Knowing she was safe and under my protection again was all I needed to wake up from the sluggish state I had been in in East Berlin. Not only were we together, but I was also able to pursue the career I had been dreaming of and get recognition for it: Acting. I mean with a face like mine, how could I not star on televisions across the nation? The end of the Cold War meant a new, albeit tentative, sense of relative safety and represented a step towards a life untouched by war. I was happy to feel a growing sense of unity reemerge in Germany; even though we were thoroughly ravaged by loss and destruction, there seemed to be hope for a brighter future once again Adalbert Schmidt I'm a 24 year old guard who worked on the Berlin Wall watchtowers. I helped regulate who comes in and out of East Germany under command by the Soviet Union. Here's when I found my sister after the wall fell. She was well taken care of by the family owning the Guten Tag Theater in West Berlin and I was ecstatic to see her well. Photos like comment share like comment share By: Emely Peralta 6th pd Life in East Berlin The infamous wall represented a hindrance to new opportunities and modernization in my opinion. For all the propaganda advertising the necessity of the wall to stimulate the economy, it seemed the only thing it blocked was our income because there wasn't much work here. On the east side of the wall I was just another disposable guard because we were "equal" over here, but as I looked over to the other side, I saw a contemporary land brimming with culture and progress. I could be anyone there and I wouldn't be just another fish in a sea but a shark in a pond with individual value. I lived in a barrack during the walls reign and every morning my unit and I would report to our commander, stand on the wall keeping us from our families on the other side, go back to my bunk, and do it again the next day. It was a monotonous yet anxious life; the tedious routine of it all seemed to strip everyone's color, turning our small part of the world grey, all the while I got to wonder helplessly if my little sister was still alive after our separation. I am the only family she has and our livestock became collateral damage during the construction of the wall. However, I could never complain lest my superiors think I harbor traitorous thoughts. I witnessed people trying to cross the wall and most times i could get away with only giving them a warning instead of a bullet to the head like our commanders told us to. I, on the other hand, never tested the wrath of the Soviets by trying to cross knowing firsthand the possible and probable outcomes. @EastTheBeast like comment share Political Stance Lives In Status Update Insights on The Wall

Transcript: Education Requirements Do I See Myself in this Career No I don't see myself in this career. I see myself doing something in the Arts career cluster when I grow up. Bricklayer Average salary is $38,000 Bricklayer is workers that create brick walls Bricklayer is in the Manufacturing section because they build brick walls for houses, so people can live in it. High School diplomia The dress code for bricklaying The education requirements Requires 2 weeks of training Accidents don't usally happen, but could The average salery is $38,000 Clothing Jeans, long sleeves, worker boots, and work hats. Main Duty Build walls for buildings Working Conditions Outdoors, noisy, and heavy lifting Job Scenery Salary Bricklayer Job Cluster What I learned 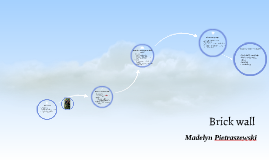 Transcript: How do I overcome my brick walls? Time management Scheduling my time better Not working so many hours Focusing on school and extracurricular activities more than work Self doubt Having a more positive attitude in all situations Telling myself I can do things, rather than telling myself I can't Graduated from college Moving on to medical school Traveling Volunteering Where am I going? Who am I? Going to college (No idea where yet) Majoring in biology Learning how to live life on my own, without my family Having a job or internship that will help me on my road to becoming a doctor I am a senior at STA I cheer, work, and volunteer I am a hardworking and dedicated person I am a very family oriented person I am respectful and honest Madelyn Pietraszewski Where will I be in 5 years? What are my brick walls Time management Work, cheer, school, Calini, family and friend time Self doubt I always tell myself I can't do things instead of being positive Not being good enough I'm afraid of my hard work not paying off Brick wall 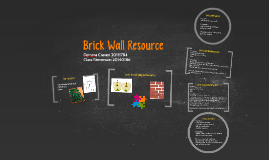 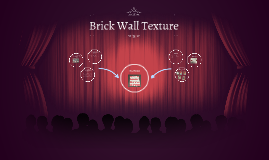 Transcript: How we painted the texture Where you can find this You can find a brick wall texture as a background setting in a play, such as Westwood Story. We used a cross hatch base, then sponged on the red brick color and grey in between bricks. Then did highlight and shadow on top of bricks to that the light is coming from above. Then to finish, we did a splatter of dark grey on bricks. Final Product A brick wall is called a Geometric texture because of the use of squares and rectangles in it. Geometric Brick Wall Texture Color Testing What we are trying to replicate Painting Process 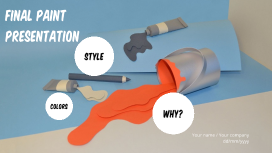 Transcript: Final Paint Presentation Your name / Your company dd/mm/yyyy TOPIC 1 Colors We used cherry red and a creamy white. And a base color of light brown with touches of pink We chose to do brick because it seemed really fun and it seemed easy. It wasn't as easy as we thought but it was a fun experience and we learned many techniques. Style TOPIC 2 TEXT TEXT In the picture it shows our final piece PICTURES PICTURES We used normal painting techniques with brushes. Although, we decided to add some texture using scumble in the background. We also outlined the bricks in a brighter red. Why? TOPIC 3 TIMELINE TIMELINE 2022 Starting final Final Piece Testing Adding texture