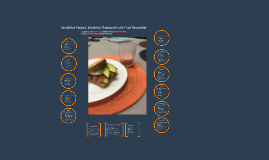 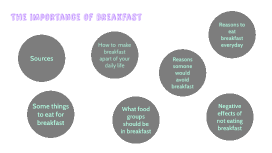 Transcript: The importance of breakfast Reasons to eat breakfast everyday Some reasons may include Energy Your body needs things like protein, carbohydrates and fats to function properly. Skipping breakfast means skipping out on those nutrients. It fuels your body with energy for the day. blood sugar It is important that blood sugar levels are balanced and eating in the morning helps better break down glucose. Breakfast balances blood sugar levels. Heart health According to studies people who skip breakfast tend to gain more weight and that contributes to high blood pressure and high cholesterol. It will promote your heart health. Negative effects of not eating breakfast Negative effects of not eating breakfast -Blood sugar will drop -Slows your metabolism -stress hormones increase -risk of heart diesease Important food groups for breakfast What food groups should be in breakfast -Whole grains -Protein -Dairy -Fruits + vegetables Reasons somone would avoid breakfast Reasons somone would avoid breakfast -waking up late for school -Being to tired to get up and make something -Simply not having an appitite -Not liking and options of what to eat How to make breakfast apart of your daily life How to make breakfast apart of your daily life -Plan out your meals -Keep it simple -wake up earlier -Try your best to avoid being to busy to eat -Plan on-the-go breakfasts Some things to eat for breakfast Some things to eat for breakfast On the go On the go -Bagel -Yogurt cup -Muffin -overnight oats -Granola bar -smoothie On time Lot's of time to spare -Acaí bowl -Pancakes -Waffles -French toast -Omlet -Egg/cheese sandwhich Sources Sources https://share.upmc.com/2017/07/reasons-breakfast-is-important/ https://www.familyfoodonthetable.com/16-easy-healthy-grab-and-go-breakfast-ideas/ https://www.futurefit.co.uk/content-hub/the-nutritional-effects-of-skipping-breakfast/#:~:text=Increased%20Risk%20of%20Heart%20Disease,6%2C%2011%2C%2012). https://foodandnutrition.org/blogs/stone-soup/make-breakfast-part-morning-routine/ 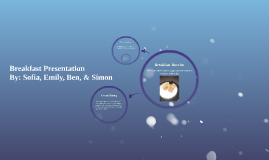 Transcript: Breakfast Presentation By: Sofia, Emily, Ben, & Simon Carbohydrates provided by tortillas and beans Fats provided by the avocado and cheese Protein provided by Canadian bacon and eggs This meal is great to start your day off. It fills you up and hits every food group. It is packed with vitamins and minerals. It is also very easy and clean to eat on the go. Overall 10/10! Breakfast Burrito With Canadian bacon, eggs, spinach, beans, cheese, and salsa Vitamins & Minerals Nutrition Analysis Overall Rating Spinach - vitamin A, calcium, iron, & potassium Avocado - vitamin A, calcium, potassium, iron, & vitamin C Black beans - calcium, potassium, & iron 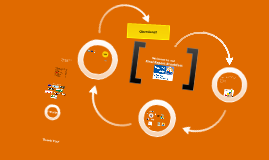 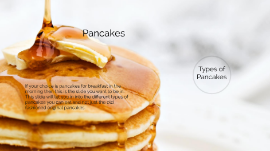 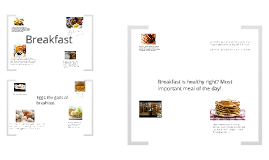 Transcript: Breakfast Breakfast! The days most delicious and important meal! Literally meaning "To break the fast", breakfast has been enjoyed in the morning by almost every culture since the first caveman got the munchies one morning The continental breakfast is widely enjoyed across the world, though it originated in europe. It usually consists of a pastry (usually a croissant) served with some cold meat, cheese or butter. Usually served with orange juice or coffee! The Full English breakfast is a monster of a meal enjoyed througout the British Isles as well as in North America! This breakfast has many different forms; the Scottish version has black pudding and back bacon, the Irish Version is served with Soda bread, and the Ulster version sometimes comes with pancakes! All versions however, include bacon, sausage, toast, beans, sauteed mushrooms, and eggs Breakfast is present in almost every culture throughout the world! A traditional Japanese breakfast, as shown here, contains grilled salmon, rice, and a bowl of miso soup. Japanese breakfasts often include "Tamago kake gohan", a rice dish cooked with raw egg and soy sauce Eggs; the gods of breakfast. There is something very wrong with us when we spend so much time cooking unborn chickens. Nevertheless, eggs are delicious in any form. Eggs benedict; crumpet, some salmon or meat, a poached egg. And hollandaise sauce. Yum Wrapping other animals in unborn animals, while cruel, is delicious. Omelettes actually originated in the middle east, but were adapted into their modern incarnation by France, Spain, and Italy! Breakfast is healthy right? Most important meal of the day! Nope. Pancakes are extremely popular in American and Europe, and just look at them. They are literally dripping with butter I dont even....dear god. Chicken and waffles is soul food dish that was invented in the 19th century, but no matter how much soul that thing has, it will take your heart along with it Breakfast is inherent in practically every culture, is a great way to start the day, and is delicious! But for the love of your arteries, keep it healthy Eggs. Frying Pan. Oil. Fried 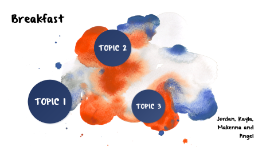 Transcript: Breakfast Jordan, Kayla, Makenna and Angel Our Breakfast TOPIC 1 -sausage -strawberries -scrambled eggs with ham, spinach, cheese, and peppers nutrition TOPIC 2 Overall, our breakfast contained some good an bad things. It had a lot of Protien and Vitamin C, but it also had fat, and carbs. Some nutrients in our dish are: -Vitamin C -Iron -Potassium -Vitamin D -Folate It also contains 4 of the 5 main food groups. Is it a good breakfast? TOPIC 3 Yes! Overall this is a healthy breakfast. Of the essential nutrients, it has: vitamins, minerals, protein, fats, and carbs. It is not a sugary breakfast, and not super fatty either. It contains protein in the eggs and sausage. According to USDA, "a healthy breakfast should consist of a variety of foods." Our breakfast is well rounded with plants meat and dairy. Our breakfast is a good way to start the day, and will keep you energized. 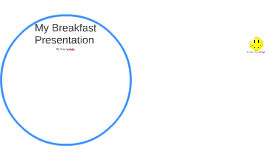 Transcript: The problem in my family was that nobody ever ate breakfast. I wanted not just to make them eat breakfast, but make them eat a healthy breakfast I decided that for this project that they should eat healthy cereal, a fruit, and a vegtable every day for two weeks These are some of my journal entries: Day 1- Started project today everybody but my brothers are onboard. Day 11- Things are going good. I checked the pantry and saw only healthy foods. Day 14- Thanksgiving is today. I let them have some junkfood for breakfast, but made sure they mostly had healthy foods. Reflection Questions: Q-Did everyone in your household follow the action plan? Explain. A-No not everybody did at first. My two brothers didn't do it at first just to make it difficult for me but eventually they started to cooperate. Q-Now that this project is over, will your family continue this action plan or revert back to old habits? A-They would go back to old habits because they didn't want to eat breakfast om the first place. My Breakfast Presentation By Nate Stubbs Thanks for watching!!!!