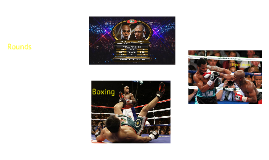 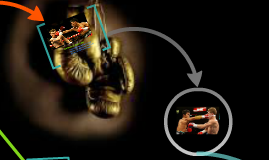 Transcript: In boxing a fighter will experience this law when being hit. At the point of contact, the punch delivers a force that will knock their opponent off balance. A hard hit comes from a hard punch. The harder the punch is quicker it has been thrown. A boxer punches the face, and face exerts an equal and opposite force to the hand. Brought to you by.... Blake Forker Brandon Troxell Newtons 1st Law Newtons 3rd law The End Newton's 2nd Law 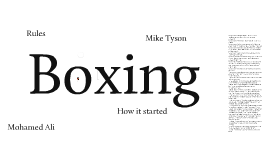 Transcript: You cannot hit below the belt, hold, trip, kick, headbutt, wrestle, bite, spit on, or push your opponent. You cannot hit with your head, shoulder, forearm, or elbow. You cannot hit with an open glove, the inside of the glove, the wrist, the backhand, or the side of the hand. You cannot punch your opponent's back, or the back of his head or neck (rabbit punch), or on the kidneys (kidney punch). You cannot throw a punch while holding on to the ropes to gain leverage. You can't hold your opponent and hit him at the same time, or duck so low that your head is below your opponent's belt line. When the referee breaks you from a clinch, you have to take a full step back; you cannot immediately hit your opponent--that's called "hitting on the break" and is illegal. You cannot spit out your mouthpiece on purpose to get a rest. If you score a knockdown of your opponent, you must go to the farthest neutral corner while the referee makes the count. If you "floor" your opponent, you cannot hit him when he's on the canvas. A floored boxer has up to ten seconds to get back up on his feet before losing the bout by knockout. A boxer who is knocked down cannot be saved by the bell in any round, depending upon the local jurisdiction's rules. A boxer who is hit with an accidental low blow has up to five minutes to recover. If s/he cannot continue after five minutes, s/he is considered knocked out. If the foul results in an injury that causes the fight to end immediately, the boxer who committed the foul is disqualified. If the foul causes an injury but the bout continues, the referee orders the judges to deduct two points from the boxer who caused the injury. If an unintentional foul causes the bout to be stopped immediately, the bout is ruled a "no contest" if four rounds have not been fully completed. (If the bout was scheduled for four rounds, then three rounds must have been completed.) If four rounds have been completed, the judges' scorecards are tallied and the fighter who is ahead on points is awarded a technical decision. If the scores are even, it will be called a "technical draw." If a boxer is knocked out of the ring, he gets a count of 20 to get back in and on his feet. He cannot be assisted. In some jurisdictions the standing eight-count or the three knockdown rule also may be in effect. In other jurisdictions, only the referee can stop the bout. Rules How it started Mike Tyson Boxing Mohamed Ali PWND 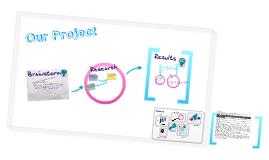 Transcript: (cc) photo by Metro Centric on Flickr doodles internal strength is a strength within our bodies that comes as needed, we all have it and we use this when we our pushing our selves passed our physical, mental, or emotional abilities. How can boxing help young inner-city teens get off the streets? Works Cited Advocate, Victoria. “women uses her fighting spirit to beat cancer.” Gale Opposing Viewpoints in Context. Gale, 24 Apr. 2012. Web. 24 Apr. 2012. <http://ic.galegroup.com////NewsDetailsWindow?displayGroupName=News&disableHighlighting=false&prodId=OVIC&action=e&windowstate=normal&catId=&documentId=GALE%7CA286003214&mode=view>. “How Boxing Helps Inner-City Kids Get a Fighting Chance at Life.” power search. N.p., 16 Apr. 2012. Web. 17 Apr. 2012. <http://go.galegroup.com//i.do?id=GALE%7CA286497110&v=2.1&u=belltwp&it=r&p=GPS&sw=w>. Lawlor, Allison. “He Grew Up Fighting And Passed It On to Others.” Power Search. Gale, 2012. Web. 25 Apr. 2012. <http://find.galegroup.com//rieve.do?sgHitCountType=None&sort=DateDescend&prodId=OVRC&tabID=T004&subjectParam=Locale%252528en%25252C%25252C%252529%25253AFQE%25253D%252528su%25252CNone%25252C6%252529boxing%252524%257E%2529_2&resultListType=RESULT_LIST&searchId=R2&displaySubject=&searchType=BasicSearchForm&currentPosition=27&qrySerId=Locale%28en%2C%2C%29%3AFQE%3D%28SU%2CNone%2C8%29%22Boxing%22%24&subjectAction=VIEW_TOPIC_TREE&inPS=true&userGroupName=belltwp&sgCurrentPosition=0&contentSet=IAC-Documents&docId=CJ281079103&docType=IAC#contentcontainer>. Introduction. World of Sports Science. K. Lee Lerner ed. 2007. Detriot: Cengage learning, 2007. N. pag. Gale power search. Web. 23 Apr. 2012. <http://go.galegroup.com//.do?sgHitCountType=None&sort=RELEVANCE&inPS=true&prodId=GPS&userGroupName=belltwp&tabID=T001&searchId=R1&resultListType=RESULT_LIST&contentSegment=&searchType=BasicSearchForm&currentPosition=5&contentSet=GALE%7CCX3451100101&&docId=GALE|CX3451100101&docType=GALE&role=GVRL>. • www.globalissues.org/article/715 notes Budapest San Francisco Results Here is my proposal! I think that boxing shouldn't be banned because it has many different upsides to it rather then only the bad things you hear about it. Notes Stockholm Our Project (cc) photo by jimmyharris on Flickr (cc) photo by Franco Folini on Flickr Double click to crop it if necessary Around 21,000 children die each year because of poverty. Children being subjected to the streets at early ages due to poverty increases the numbers in gang violence and many other negative things, according to www.globalissues.org/article/715. How one person's down fall can be anothers uprising in certain carers. Research outlook As we grow older we begin to realize that one person's experiences can help improve our own. Every day we learn new things rather it be at school or from or elderly, but the things they teach us regardless can help us in our careers and in life its self. How it boxing can help give people internal strength to help fight challenging events outside of the ring? photo frame We can also write a letter to our governor Pat Quinn, to allow him to understand that we as people care for others as well. Place your own picture behind this frame! (cc) photo by Metro Centric on Flickr details Assets map To help the minority we, could sign a petiton to not banned boxing Important Details Brainstorm 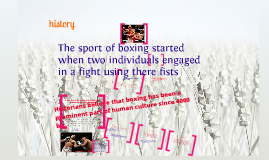 Transcript: Roy jones jr vs Felix Trinidad training for this sport consist of alot of devotion, skills,and conditioning. boxers have to maintain there weight for the fight and make weight. arthritis is also common to boxers. human hands are not meant to take large amounts of beatings for a long perioud of time foot work and hand speed, reactive power and hand eye coordination can be improved with proper conditioning. If mastered the oppenent will have a really hard time. sticking with a good diet and training routine will tremendously improve performance that is why trainers are strict on there boxers. The sport of boxing started when two individuals engaged in a fight using there fists A boxers diet is pretty much the same as any other serious athletes. Agility and reaction time are vital components of a boxers amoury. The faster you can lay a blow on the opponent there is more likely of a chance for cuts and gashes to occur from the quick impact history The first documented rules for boxing were written and published by Jack Boughtonis, in 1743, who felt obligated to establish some sort of guidelines after accidentally killing one of his opponents in the ring. Dementia pugilistica is common to boxers that it was named after the sport. sypmtoms include memory loss, dementia similar to Alzheimers disease. It was one of the many events that were held in the ancient olympics. Roy Jones Jr was born jan. 16, in 1969. He won numerous championship and is the only boxer in history to start in the junior middle weight and go on to win the heavy weight title. one of the many great fights that is remembered. Felixis is probably one of the few boxers ever to go all 12 rounds. Jones later that night defeated felix landing 12% more punches then felix, 36-29 jones protein- tuna, eggs, meat and milk fruits and vegatables liquids- lots of water fats long term effects Boxers Diet Training should develop both aerobic and anaerobic system. they must be able to react quickly and powerfully to an opponents attack. Today boxing competition is divided into a set of numbers of rounds championship bouts usually last for 12 rounds, but rules vary from state to state. in the U.S judges use scorecards to determine the winner as the fight goes on. Roy Jones Jr. Historians believe that boxing has been a prominent part of human culture since 4000 b.c. 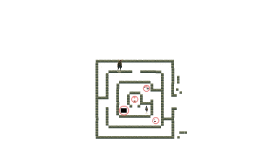