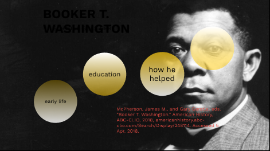 Transcript: SUBTITLE GOES HERE McPherson, James M., and Gary Gerstle, eds. "Booker T. Washington." American History, ABC-CLIO, 2018, americanhistory.abc-clio.com/Search/Display/248114. Accessed 5 Apr. 2018. BOOKER T. WASHINGTON booker t washingtons childhood life early life Born to a slave on April 5, 1856, Booker Taliaferro Washington's life had little promise early on., the child of a slave became a slave. Booker's mother, Jane, worked as a cook for plantation owner James Burroughs. where he was born where he was born born in franklin county virginia, Booker and his mother lived in a one-room log cabin with a large fireplace, which also served as the plantation’s kitchen. Pictures Pictures what he did what he did At an early age, Booker went to work carrying sacks of grain to the plantation’s mill. carrying 100-pound sacks was hard work for a small boy, and he was beaten on occasion for not performing his duties satisfactorily. education education Booker's first exposure to education was from the outside of a school house near the plantation; looking inside, he saw children his age sitting at desks and reading books. He wanted to do what those children were doing, but he was a slave, and it was illegal to teach slaves to read and write. In 1872, Booker T. Washington left home and walked 500 miles to Hampton Normal Agricultural Institute in Virginia. Along the way he took odd jobs to support himself. He convinced administrators to let him attend the school and took a job as a janitor to help pay his tuition. The school's founder and headmaster, General Samuel C. Armstrong, soon discovered the hardworking boy and offered him a scholarship, sponsored by a white man. education education Booker T. Washington graduated from Hampton in 1875 with high marks. For a time, he taught at his old grade school in Malden, Virginia, and attended Wayland Seminary in Washington, D.C. In 1879, he was chosen to speak at Hampton's graduation ceremonies, where afterward General Armstrong offered Washington a job teaching at Hampton. In 1881, the Alabama legislature approved $2,000 for a "colored" school, the Tuskegee Normal and Industrial Institute (now known as Tuskegee University). education education how he helped Born a slave on a Virginia farm, Washington (1856-1915) rose to become one of the most influential African-American intellectuals of the late 19th century. In 1881, he founded the Tuskegee Institute, a black school in Alabama devoted to training teachers. DEATH booker died november 14 1915 due to high blood pressure if he was still alive today(april 5th 2018) he would be 162 years old today the day im typing this is his birthday so happy birth day booker