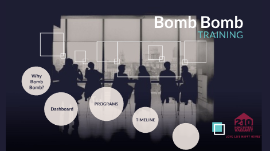 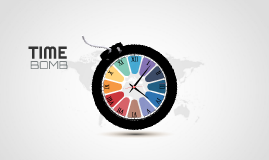 Transcript: Time to create your Prezi Prezi Template with a Time & Bomb concept. Present about hot topics, deadlines, news bombs... Use Roman Numerals? The clock is ticking... = TIME http://prezibase.com Get this Prezi Template from: Zoom in anywhere and start adding your own content BOMB Lots of colorful placeholders for your slides 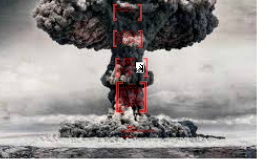 Transcript: Creative responce This photo represents how The United states was the first to complete the Atomic bomb. While the U.S had many people trailing the production of the bomb, we were able to finish the race in first and ultimately end the war. When we crossed the finish line it was a relief to the US and all against Germany, that the massive power of the bomb was in good hands. As soon as we dropped the bombs on Japan, the war was over; this is symbolized when we crossed the finish line of the war. Another aspect of the photo is how many racers are following the person who won. These people represent all the spies, and countries fighting for possession of the atomic bomb. Overall, this picture represents Bomb in many ways. The theme of Bomb is that one thing can make the difference, be it war, such as in Bomb, or much minor things. In the story, several regions race to build the atomic bomb, and in the end, when America wins the race, world war two is won. This shows that one powerful thing can make a difference in something. Without the creation of this bomb, many more lives would have been lost, and maybe the war would have been lost too. The theme can also relate to everyday life. For example, in school, one test or assignment can make the difference from getting a good grad in a class, or not doing very well at all. Overall, the theme in Bomb is that one big thing, or little, can make a big difference. Sheinkin, Steve. Bomb: The Race to Build and Steal the World's Most Dangerous Weapon. New York: Roaring Brook, 2012. Print. Across the Finish Line. Digital image. Run for Montreal. N.p., 09 Sept. 2013. Web. 16 Oct. 2013. Book Written by Steve Sheinkin 266 pages Evan Brown Citations Creative Response Bomb One particular section in the text that stood out to me is when Oppenheimer began gathering scientists for work on the Atomic Bomb. This was a turning point in the story because the US had just realized how important the creation of the Atomic Bomb was. As time went on, and as Los Alamos, the top secret bomb building base, gathered scientists and began work on the Bomb. Before this, work on the bomb was hard to keep confidential, at least more confidential then it was in Los Alamos. The scientists could now work in secrecy, share ideas, and fly ahead of the competition in the creation of the bomb. Many important discoveries were made because of the congregation of the scientist, and in turn the bomb was completed to win the War. Theme 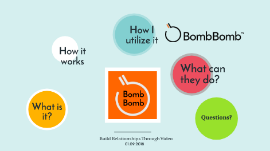 Transcript: Bomb Bomb 01.09.2018 Build Relationships Through Video What is it? Bomb Bomb . . . Email Marketing Platform that imbeds video within your message (from your email) along with a live video preview Easy to use simple videos to build relationships through email, text, and social. Complete tracking and analytics, including real-time alerts and relationship scores Pricing How It Works How it works RECORD VIDEO ANYWHERE RECORD VIDEO ANYWHERE Record X Laptop Desktop Android iOS Tracking Who viewed it When it was viewed Total views Most recent views Views by device Views by browser Tracking Scheduling Scheduling Control your communication Block time to make several videos Send each video now, in an hour, a day, a week... Analytics will help your open rate, maybe a certain time works best! Response & Reminders Record and load canned responses to effectively utilize your time You can have ready-made text responses, or even utilize short videos Response & Reminders Never miss another connection opportunity or chance to follow up. Bomb Bomb will remind you, if you choose, when an email or video has not been opened. These reminders can be sent as an email or directly to your phone via text message. How I Utilize It How I utilize it Introduction Introduction About Me About Me Bring the power of your elevator pitch, to every inbox or cell phone in your database Training Training Use this as a chance to create walkthrough videos on FAQs Have you tried this? Have You Tried This? Have you tried this? Short step-by-step videos allow you to be present when you're not Answer questions before they're asked! Send a video to your escrow team, or shoot it with them, to send to clients Save everyone time by working together to see how you can each utilize this tool to solve a reoccuring problem Follow Up Follow Up Use Bomb Bomb's analytics for precise follow up Whether they have opened the video or not Check in with a video using their name Make sure they don't have any other questions What can they do? What can they do with Bomb Bomb? The same things that you are doing... LEAD BY EXAMPLE!!! Real Estate FAQs Snapshot CMAs Neighborhood Highlights Yes, I tried to make this look like the Death Star Be Creative But Wait There's More But Wait There's More 01. 02. 03. Use your resources, take tips & turn them into videos (Breakthrough Broker, Etc.) Personalized Birthday, Holiday, Anniversary & Special Events messages Utilize Bomb Bomb's weekly live webcast for up to date tips and ideas Questions? Questions? Answers 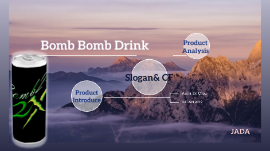 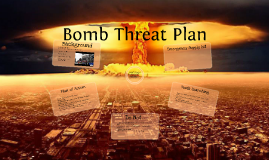 Transcript: Plan of Action Do Not... Bombs will most likely be packaged or camouflage to hide away. Just remember if you see something unusual in the area you are in. Do not touch the object Contact someone immediately. Background If bomb threat is received by phone: - Remain calm. - If your phone has a display, copy the name and phone number if given. -The most crucial information you need to get is the detonation time and place. -Don't hang up, have someone call 911 from another phone. - Give emergency personnel phone number. - Use a two way radio or cellular phone. Radio signals have potential to detonate a bomb. - Evacuate the building until the police has evaluated the situation. - Activate the fire alarm. - Touch or move suspicious objects or packages. Bomb Threat Plan Bomb threats occur very often throughout the country and victims are not aware of proper emergency procedures and many times it results in fatality. After being presented the previous information we hope you are confident in proper bomb threat procedures. Emergency Supply kit During the 2013 Boston Marathon, two bombs erupted at the finish line 3 people were killed 264 were injured 2 bombers were eventually identified and both were eventually killed Bomb Searching 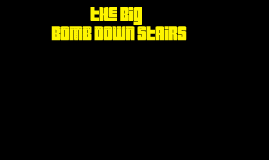 Transcript: THe BIG BOMB DOWN STAIRS Once upon a there was a dark and damp house And in that Damp house there was some stairs going down And down those stairs was a door And threw that door was a whole basement full of old things and spider webs everywhere you go,and they are everwhere you go even on the floor and i mean on the floor fghjfjhfhgj 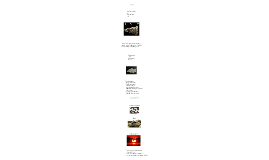