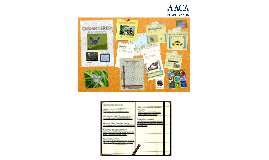 Transcript: ENDANGERED: Karner Blue Butterfly 15:45 task analysis You need to understand why the Karner Blue Butterfly is endangered, then do something to help them avoid extinction. Think Like an Ecologist ecologist: a biologist who studies the relation between organisms and their environment. Ecosystem: DEFINITION: all the living (biotic) and nonliving (abiotic) parts of an environment that interact. etymology eco: From French eco-, from Latin oeco from Ancient Greek (oikos, “house, household”). system: from Latin systma, in turn from Greek systma, "whole compounded of several parts or members, system", literary "composition"[1]) is a set of interacting or interdependent components forming an integrated whole. Square Foot Project To begin to understand how ecosystems work, we are going to study one square foot of "wild space". What did you OBSERVE or INFER? Add your observations and inferences with a post-it below! Sort the post-its into categories. What patterns do you see? RACCOON CIRLE METAPHOR an ecosystem is an interdependent system. *Safety note: as an interdependent system, if anyone is unsafe, others can be harmed. What helps the biotic parts of an ecosystem to survive? Abiotic Factors in the Ecosystem Hydrologic Cycle Ice Balloon Activity H2O Cycle Model Hydrologic Cycle Visual Energy Flow Food Chain Food Web Energy Pyramid Air Oxygen Carbon Dioxide Nitrogen Research Life of the Karner Blue Butterfly 1. What is its life cycle? 2. What needs does it have at various stages? 3. What adaptations does the butterfly have? Population Dynamics Oh Deer! Simulation Population Time (rounds) What caused the population decrease of the Karner Blue Butterfly? Habitat loss? Over predation? Scant/limited resources? Now, you find the evidence to determine the cause for the decline in population. Your job: Determine the original cause for the destabilization of the ecosystem. Are we a part of the ecosystem? Do our actions affect the ecosystem? Development Mitigating Fire what can we do? Over Predation 10 Wisconsin Public Television Special http://video.wpt2.org/video/1543370094/ http://video.google.com/videoplay?docid=6650219631867189375 Habitat loss Wildlife Journal Jr. Article http://www.nhptv.org/wild/karner1.asp 5 The Lorax Field Trip New Hampshire Public Television Special http://video.nhptv.org/video/2017303977/ Conservation Efforts http://www.butterflyrecovery.org/recovery/karner_habitat_restoration_project/ Butterfly Recovery Efforts http://www.butterflyrecovery.org/species_profiles/karner_blue/ Lack of Resources Propogation Handbook http://www.fws.gov/midwest/endangered/insects/kbb/KBBPropagationManual.html INVESTIGATION RESOURCES But... What caused that? 15 Fish and Wildlife Services Podcast http://www.fws.gov/endangered/about/ep-19.html 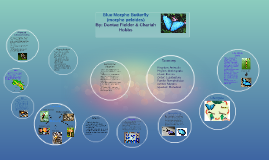 Transcript: * They live in the tropical rainforest of Latin America , from Mexico to Colombia ; mostly on the forest floor & lower tree shrubs. Threats Physical Characteristics * Wingspan: 3 to 8 inches. One of the largest butterflies in the world. * They are bright blue edged with black , the color of their wings reflect light from microscopic scales on their back. * Males are usually broader in wing size and brighter in color than females. * Underside the wings , is a dull brown with many eye spots providing camouflage. Birds (Jacamar) Reproduction * Typically lives alone * Males go after any rivals. * Easy to catch because of their wobble in flight. * Active during the day; turns wings at night so that the underside is showing , making them invisible to predators. ENDANGERED?!?! Butterfly this turns into... Tree Sap * Deforestation of tropical rainforest and habitat fragmentation. * Birds - Mainly, the Jacamar and the Flycatcher. * Humans - We are sadly attracted to their beauty. So, we (collectors) feel the need to capture, KILL and display them. * reproduce and die immediately after laying their eggs. * lay about 50 - 100 eggs that will hatch after 9 days. * males release chemicals that attract females during mating season. * the mixture of blue and brown wings makes it hard to see when flying * ability to lay large numbers of eggs increases the survival of species, surviving members reproduce & reproduction cycle continues. * specially adapted mouth- good for feeding on a wide range of foods *blue sides - blind predators ; brown side- camouflage & may scare off predators. Life Cycle Food Web Rotten Fruit *Egg- 1st stage; some caterpillars wait till spring , other 2 weeks. *Caterpillar- 2nd stage; don't have a skeleton, in order to grow must shed skin four or five times. A freshly hatched caterpillar will grow 1000 times in 3 weeks. *Cocoon- Transformation into a butterfly; keeps them safe from the rain and predators; spun by the caterpillar two days before. *Butterfly- Starts to emerge by pushing out with its legs. * Also , because of their habitat their lifespan is 115 days approximately spending most of that time eating & reproducing. Baby Jaguars Behavior Survival For Adaption Diet Habitat Scientist have been studying the Blue Morpho Butterfly species and have noticed that this species might be in risk of becoming endangered. They are mostly affected by the destruction of their natural habitats. Also, us humans use their wings to manufacture jewelry & other fashion items. * Caterpillar Life: Dine on plants in the pea family. * Butterfly Life: Since they no longer can chew, it drinks its food through the mouth part tube (proboscis) to drink the juice of rotting fruit , fluids of decomposing animals, tree sap , fungi & wet mud. * Taste food with sensors on their legs and taste & smell with antennae which serves as a tongue & nose. * Fruit Preferences: Mango, kiwi, & lychee. Kingdom: Animalia Phylum: Anthropoda Class: Insecta Order: Lepidoptera Family: Nymphalidae Genus: Morpho Species: Menelaus Fungi Blue Morpho Butterfly (morpho peleides) By: Dontae Fielder & Chariah Hobbs Life Cycle Cont. Taxonomy 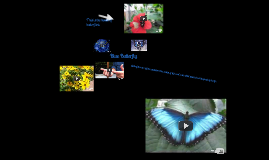 Transcript: Blue Butterfly Butterflies are often considered as asign of life,as it's an adult which is st thepeak of its life. This is the house of butterflies. 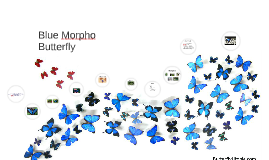 Transcript: Habitat Blue Morpho Butterfly Live in the canopy of the rainforest One of 147 subspecies of morpho butterfly Average lifespan 115 days Maximum life span 137 days Can reach speeds of 12 mph Defense:Release a yucky smell from in between their legs Sap Mud Rotting fruit juice Decomposing Animal Fluid Cool Facts There about 17,500 species of butterflies in the world and the Blue Morpho is one of the best. Wings Stellar Location Dangers Diet Amazing 8 inch wingspan The Body Parts 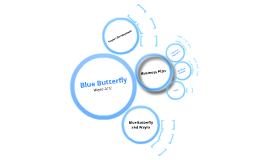 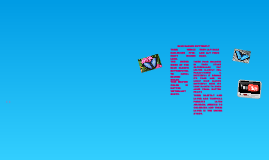 Transcript: Their habitat and layer are tropical forests Latin Amercia Mexico to Colombia and their layer is the under story. The under sides of the blue morph butterflyhave adull brown shade. This brown color is dotted withmany spots. Blue morph butterfly They lay eggs and lay four eggs. Their wings measures five-eight inches long. There food changes in each stage caterpillars eat leaves mostly pea famliy,when a butterfly it drinks its food and an adult blue morph butterfly uses its long mouth to suck juice from rotten fruits 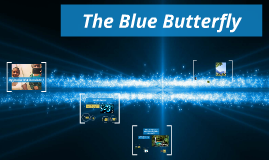 Transcript: The entire life cycle of the Morpho butterfly, from egg to death, is approximately 115 days. The larvae hatch from pale green, dewdrop-like eggs. The caterpillars have reddish-brown bodies with bright lime-green or yellow patches on its back. Its hairs are irritating to human skin, and when disturbed it secretes a fluid that smells like rancid butter. They feed on a variety of leguminous plants. The caterpillar will molt five times before entering the pupal stage. The chrysalis is jade-green and emits a repulsive, ultrasonic sound when touched. The adults live for about two to three weeks. They feed on the fluids of fermenting fruit, decomposing animals, tree sap and fungi. They are poisonous to predators thanks to toxins they sequestered from plants they fed on as caterpillars. laying 50 to 100 eggs at a time. By Janine N & Dominae J Their Poor World :'( Time For It to Go On A DIET The blue butterfly, also known as Morpho menelaus is a beautiful enchanting BLUE butterfly! What Do THEY Like? What is Getting TAKEN from them? Home Sweet Home Some humans use the butterfly for jewelry! By keeping the butterflies away from preditors such as birds, man, fish, lizards and spiders, plantings trees and flowers for sheltor and food, and also keeping them near water would help them from extintion. Native Habitat Poor Butterfly :( BLUE Basics The Blue Morpho Butterfly is a species of neotropical (The eotropical region extends from the southern tip of South America up to Mexico. This vast region includes many different habitats, including tropical rainforests) butterfly that has brilliant blue wings. South and Central America has rainforests beyond your wildest dreams. The Blue Butterfly the Blue butterfly is ostly found in rainforests such as the ones in South and Central America. Life Cycle How can we help? Humans cut down trees in the rainforests for their own benefits such as furniture, tiles, and many other manufacted goods. The blue morpho’s diet changes throughout each stage of its lifecycle. As a caterpillar, it chews leaves of many varieties, but prefers to dine on plants in the pea family. When it becomes a butterfly it can no longer chew, but drinks its food instead. Adults use a long, protruding mouthpart called a proboscis as a drinking straw to sip the juice of rotting fruit, the fluids of decomposing animals, tree sap, fungi and wet mud. Blue morphos taste fruit with sensors on their legs, and they "taste-smell" the air with their antennae, which serve as a combined tongue and nose. 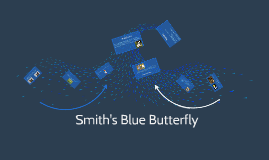