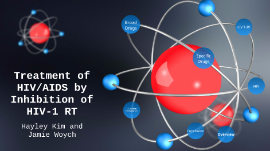 Transcript: Hayley Kim and Jamie Woych Treatment of HIV/AIDS by Inhibition of HIV-1 RT What is HIV? What is HIV 1-Reverse Transcriptase? Specific Antiretroviral Drugs Broad Spectrum Antiretroviral Drugs Current and Future research Overview Overview Human Immunodeficiency Virus, or HIV, attacks the body’s immune system, specifically the CD4 cells (T cells). HIV results in a higher susceptibility to attack on the immune system by disease and cancer This virus also leads to AIDS, a debilitating and deadly disease of the human immune system. HIV/AIDS is affecting over 1.2 million people in America What is HIV? HIV HIV-1 RT HIV-1 Reverse Transcriptase is an enzyme encoded for within the Human Immunodeficiency Virus (HIV) genome Function is transcribing double stranded DNA from the ss viral RNA template. HIV-1 RT is currently being studied as a target for HIV treatment HIV-1 RT also transcribes mistakes every 1 in 2000 base pairs HIV 1-RT HIV-1 RT has two active sites: polymerase active site, and RNase H active site. The polymerase active site acts in the polymerization of DNA strands The RNase H active site works to cleave RNA strands from RNA/DNA hybrids created during the replication process. Active Sites of HIV-1 Reverse Trascriptase Specific Antiretroviral Drugs Specific Drugs Antiretroviral drugs are subdivided into two categories: nucleoside reverse transcriptase inhibitors (NRTIs) and non-nucleoside reverse transcriptase inhibitor (NNRTIs) NRTIs Nucleoside reverse transriptase inhibitors (NRTIs) NRTIs are inhibitors that terminate the polymerization of the viral DNA strand. They can act as substrates that competitively inhibit the replication process. NRTIs have structural similarity to nucleosides, and can imitate a dNTP during the replication process and stop elongation. Azidothymidine (AZT) is a NRTI drugs that utilizes their structural similarity with thymine to halt DNA replication Thymidine analogues such as azidothymidine (AZT Structural Similarity NNRTIs NNRTIs have varying chemical structures, and act as noncompetitive inhibitors to the replication process. NNRTIs bind more specifically, targeting hydrophobic pockets that are close in proximity to the polymerase active site This higher specificity can suppress HIV replication even at lower concentrations Nevirapine is an NNRTI used that allosterically binds to this pocket and incites a conformational change in the enzyme, blocking the binding of the RNA template strand. Non-nucleoside reverse transcriptase inhibitor (NNRTIs) Nevirapine is an NNRTI used that allosterically binds to the hydrophobic pocket. The binding of NNRTIs Highly active antiretroviral therapy The use of a combination of NRTIs and NNRTIs has proven to be much more effective for the repression of viral replication. Highly active antiretroviral therapy or (HAART) is the use of multiple drugs with more than one target site for peak efficiency of treatment. Different sets of drugs are delivered to the patient in a rotating fashion to combat drug resistant strains Yet it still caused a drastic increase in multiple drug resistant strains of HIV This is due to its heightened ability for mutation These NRTI and NNRTI resistant mutations have created a demand for alternative antiretroviral drug treatments Highly active antiretroviral therapy Broad Drugs Broad Spectrum Drugs decrease in specificity of drug binding allows for a broader range of target domains, with limited resistance Broad spectrum drugs are able to inhibit many variants of the viral structure KM-1 Highly efficient on a wide range of enzyme conformations KM-1 inhibits replication similarly to NNRTIs by lowering HIV-1 RT’s affinity for the dNTP substrates This compound does not bind the hydrophobic pocket but rather inhibits RT by lowering the affinity of the enzyme toward the nucleic acid substrate KM-1 NAPETA N-{2-[4-(aminosulfonyl)phenyl]ethyl}-2-(2-thienyl)acetamide (NAPETA) Low specificity of binding results in a lower risk of resistance to the drug. The functions of NAPETA include: interfering with the formation of the Reverse Trascriptase DNA complex. decreases enzyme affinity, and acts as a DNA Polymerase inhibitor, wholly repressing polymerase activity of the virus. NAPETA Current Research These drugs target both HIV-1 RT and Integrase (IN) enzymes in the virion, and are engineered by rational design based on the targets. Integrase (IN) enables the viral genetic material to be integrated into the DNA of the infected cell. Current research has focused on the individual enzyme targets, but future shifts will focus on studying the maturation process of the enzymes The folding patterns of HIV-1 RT is presently known, and through rational design, inhibition of this pathway may be targeted to prevent these enzymes from assuming structurally functional forms. Current Research Dual Inhibitory Drugs Conclusion What is HIV? What is HIV 1-Reverse Transcriptase? Specific & Broad Spectrum Antiretroviral Drugs Future research possibilities 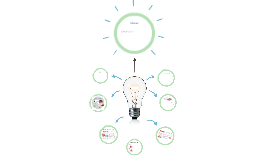 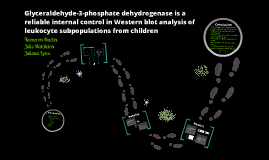 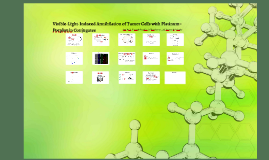 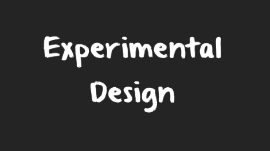 Transcript: Experimental Design Protocol: NAD+, FAD, Coenzyme Q and the Cytochromes are important electron acceptors in aerobic cellular respiration. Electron Acceptors DCIP can act as an electron acceptor, and changes colour when it is reduced. DCIP as an electron acceptor Oxidised (no electrons) Reduced (gain electrons) Biological Oxidation Reactions Lack of NAD+ will affect oxidation of pyruvate, lactate and malate. Hypotheses Adding NAD+ will allow all substrates to be oxidised. Malonate will only affect succinate oxidation. Controls No NAD+ No malonate NAD+ only Malonate only NAD+ and Malonate 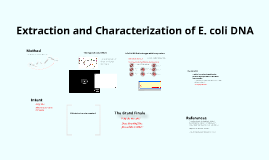 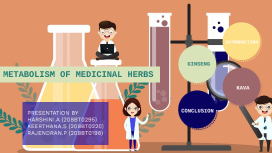 Transcript: METABOLISM OF MEDICINAL HERBS PRESENTATION BY HARSHINI.A (20BBT0295) KEERTHANA.S (20BBT0220) RAJENDRAN.P (20BBT0198) INTRODUCTION INTRODUCTION Medicinal plants, also called medicinal herbs, have been discovered and used in traditional medicine practices since prehistoric times. Plants synthesise hundreds of chemical compounds for functions including defence against insects, fungi, diseases, and herbivorous mammals. Numerous phytochemicals with potential or established biological activity have been identified. However, since a single plant contains widely diverse phytochemicals, the effects of using a whole plant as medicine are uncertain. Further, the phytochemical content and pharmacological actions, if any, of many plants having medicinal potential remain unassessed by rigorous scientific research to define efficacy and safety. The beneficial medicinal effects of plant materials typically result from the combinations of secondary products present in the plant. That the medicinal actions of plants are unique to particular plant species or groups is consistent with this concept as the combinations of secondary products in a particular plant are often taxonomically distinct. EXAMPLES EXAMPLES Ginseng St. John’s Wort Ginkgo (Ginkgo biloba) Kava Echinacea sp. GINSENG GINSENG Ginseng is a medicinal plant widely used for the treatment of various conditions. The pharmacological effects of ginseng have been demonstrated in cancer, diabetes, cardiovascular diseases and have been used for promoting immune function, central nervous system function, relieving stress, and for its antioxidant activities. The root of Panax ginseng, which is known as Korean or Asian ginseng, is a valuable and an important folk medicine in East Asian countries, including China, Korea, and Japan, for more than 2000 years. Panax is derived from the word “panacea,” which means a cure for all diseases and a source of longevity as well as physical strength and resistance. As the use of traditional Chinese herbs for medicinal and dietary purposes becomes increasingly popular in Western countries, sales of P. ginseng are increasing in North America and Europe as well as in other parts of the world. METABOLISM Interest in the use of ginseng comes from their purported “adaptogen” or “tonic” activities. Such activities are thought to increase the body’s capacity to tolerate external stresses, leading to increased physical or mental performance. Although an extensive literature documenting adaptogenic effects in laboratory animal systems exists, results from human clinical studies are conflicting and variable. However, there is evidence that extracts of ginseng can have an immunostimulatory effect in humans, and this may contribute to the adaptogen or tonic effects of these plants. The major secondary products present in ginseng roots are an array of triterpene saponins, collectively called ginsenosides. The ginsenosides are glycosylated derivatives of two major aglycones, panaxadiol and panaxatriol. At present, 50 ginsenosides have been identified of which the ginsenosides, Rb1, Rb2, Rc, Rd, Re, Rf, Rg1, and Rg2 are considered to be the most relevant for pharmacological activity. Different ginseng species have different proportions of ginsenosides in root tissue, and this may relate to reported differences in the pharmacological properties of these plant materials. Moreover, within a particular ginseng species, levels of particular ginsenosides can also be affected by environmental factors such as soil mineral nutrient supply. From laboratory studies, it has been suggested that the pharmacological target sites for these compounds involve the hypothalamus-pituitary-adrenal axis due to the observed effects upon serum levels of adrenocorticotropic hormone and corticosterone. However, it should also be noted that the overall effects of the ginsenosides can be quite complex due to their potential for multiple actions even within a single tissue. STRUCTURE STRUCTURE Benefits BENEFITS Increased energy Sharper cognitive function Anti-inflammatory effects Treatment of erectile dysfunction Flu prevention Lowering blood sugar KAVA KAVA The use of Kava originated in the “Oceana” island communities encompassed by Polynesia. “Kava” (also known as “Kava-Kava,” “Ava,” and “Awa”) refers to an intoxicating beverage used in rituals and ceremonies, which is produced from the mashed rhizome and roots of the woody shrub, Piper methysticum. However, Kava is now used as the common name for P. methysticum as well as thephytomedicine produced from root/rhizome ex- tracts. Worldwide, Kava is receiving considerable at- tention for its use as a treatment for anxiety, nervous tension, agitation, and/or insomnia. Clinical studies have shown an effectiveness of Kava that is compa-rable with sedatives such as benzodiazapines but without the development of either physical or psychological dependency. The pharmacological activity of this plant appears to be associated with a family of 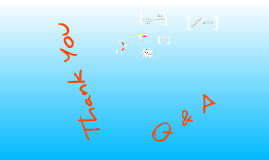