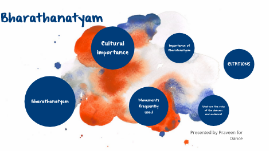 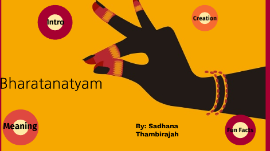 Transcript: Bharatanatyam By: Sadhana Thambirajah Intro Bharatanatyam is a classical dance from Tamil Nadu in India. It is a temple dance for girls which you do with bent leg and feet rhythm. This specfic type of dance expresses Hindu religious stories and devotions. Introduction Description Description Bharatanatyam has different features that are divine. It includes body movements, hand gestures, facial expression complicated footwork, elegant costumes, and pleasing music. What does Bharatanatyam mean? Meaning The word bharatanatyam is made up with four words in Sanskrit. The words are bhava, raga, tala, and natyam. Bhava means expression, Raga means melody, Tala means rhythm, and Natyam means dance. The word bharatanatyam is made up with fo... Who created Bharatanatyam? Creation The hindu god of dance or bharatanatyam is Lord Shiva. He is the god who created hindu dance. The hindu god of dance or bharatanatyam is Lord Shi... Bharatanatyam music contains various instruments which are: Mridangam Nadaswram Flute Violin Veena Manjira In bharatanatyam there are bells that you wear on your feet called salangai. It is used so you can hear the rhythm from your feet. It is also used for the sound. Instruments Instruments Fun Facts Fun Facts Bharatanatyam is the demonstration of the ancient idea of the celebration through the beauty. The physical expressions express a poetic meaning. Not only do Hindu people learn bharatanatyam, but now people from other religions learn this dance too. This is because the dance is so popular and because of cultural diffusion. Resources https://www.britannica.com/list/6-classical-dances-of-india http://danceasia.org/Bharatanatyam/Bharatanatyam.html http://rangashree.org/bharatanatyam-description.html http://thegreatestz.blogspot.com/2009/02/salangai.html http://www.iohu.org/rathayatra/ http://infomory.com/facts/lesser-known-facts-about-bharatanatyam/ Pictures http://natyanjali.org/wp-content/uploads/sites/18/2016/04/Screen-Shot-2016-05-01-at-11.09.50-PM.png http://clipart-library.com/clipart/pTqMAzgT9.htm http://www.musicinstruments.in/imagess/Ekanda-Veena-Lite-Carving.jpg https://classicaldancekart.com/image/cache/data/Ankle%20Bells/5%20Line%20Leather%20Ankle%20Bells%20(Salangai)%20SL104%20Pic%204-800x800.jpg https://play.google.com/store/apps/details?id=com.BharatanatyamDanceVIDEOs http://bharatanatyamlessonsonline.com/ https://www.dreamstime.com/stock-illustration-illustration-woman-dancing-indian-dance-style-bharatanatyam-traditional-image89246962 http://www.satyapradeep.com/classical-dance.php https://www.lotussculpture.com/mm5/graphics/00000001/1-Bronze-Dancing-Shiva-Statue.jpg http://www.indiabazaar.co.uk/images/product_image/04Feb20111002542678a.jpg https://www.india-instruments.com/tl_files/instruments/percinst/mridangam/plm_mridangam2.jpg http://www.lakshmansruthi.com/musicals/Product/Nathaswaram/images/Nathaswaram-1.jpg https://vadyamusicalinstruments.files.wordpress.com/2013/05/buy-indian-flute-online.jpg http://www.wikihow.com/images/4/4e/Take-Care-of-a-Violin-Step-4.jpg Bibliography Bibliography 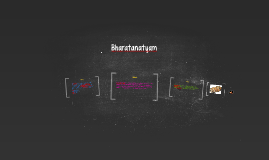 Transcript: History Bharatanatyam is a dance that largely tells a story. Most of the stories are from the Hindu Mythology. The dancers use poses, facial expression, and hand movements to tell the story to the audience. The performances are about 2 hours long. Music Bharatanatyam Bharatanatyam is performed in traditional South Indian Carnatic Music. Some common instruments that are used are violin, mrudangam (double headed drum), and flute. Dance This is what a mrudangam looks like. Bharatanatyam is a classical dance style from South India performed by both men and women. Bharatanatyam is the oldest dance form in India. Bharatantyam is recoreded as far back to the 9th century. Bharatanatyam was known as Sadir until the early 1900s. The name Bharatanatyam is determined in two different ways. One of them is composed of related words: Bhava (expression) Raga (Melodic Mode) Tala (Rhythm) Natyam (Dance) 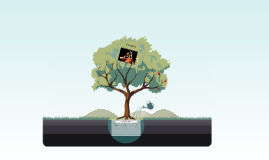 Transcript: Bharatanatyam Performed in Temples as part of a ritual ceremony this is a classical dance from south india Taylor Spencer The dance 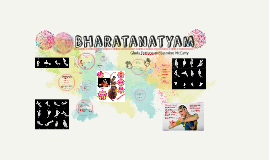 Transcript: Mudra rhythm dance steps http://andreag2b03.tripod.com/Mudras.html - Earliest form of classical South Indian dance originating in the 10th century AD. Practiced in Tamil Nadu and other South Indian regions. - Performed by both men and women, and it holds reilgious connotations. - Represents detailed accounts of Hindu mythology, and it acts as a storytelling device. - The audience typically knows the stories being portrayed, and each gesture and facial expression holds specific meanings. 1) Ramayana: a Sanskrit epic poem about one of the most widely worshipped Hindu deities, Rama. 2) Mahabharata: An epic narrative of the Kurukshetra War and the fates of the Kaurava and the Pandava princes. Donia. "Bharatanatyam." Bharatanatyam. N.p., n.d. Web. 06 Apr. 2016. Puri, Rajika. "Bharatanatyam Performed: A Typical Recital." (n.d.): n. pag. Illinois.edu. Web. 04 Apr. 2016. Mai, Madhavi Marcia. "About Bharatanatyam - Sadhana Dance Theater." About Bharatanatyam - Sadhana Dance Theater. N.p., n.d. Web. 06 Apr. 2016. Argada, Martina. "Natya, Nritta and Nrittya." Martina Meenakshi Argada. N.p., 19 Feb. 2015. Web. 06 Apr. 2016. musical mood Holy Moly, it tells Holy Stories Second origin of the name: the sage, Bharata, who wrote the principles of the dance sometime between the 1st and 2nd century AD. 1) Nritta - the level of "pure movement". Composed of gestures and steps that holds specific meanings, yet do not convey any particular message. Primarily used to add aesthetic value to the dance. hand gestures Bharatanatyam tala expression of emotions 3 Levels of the Dance BHAva - expression RAga - melody TAla - rhythm NATYAM - dance Comparison to ballet Set vocabulary of movement Adavu raga when combine a series of dance steps, creates a korvais Anjali. "History of Bharatanatyam." Online Bharatanatyam RSS. N.p., 27 June 2007. Web. 05 Apr. 2016. What do these gestures convey? Gestures elaborate eye, neck and hand movements 1) Pataaka: flag, clouds, forest, bosom, nighttime, fierce heat or wind 2) Tripataaka: a tricolor flag 3) Ardhapataaka: half of a flag 4) Kartari-Mukha: scissors, arrow shaft 5) Mayura: peacock FUN FACT! 10) Shikhara: beak, armor, bow, saying no, the sound of bells, or drinking Costumes and Design Savitha Sastry Gloria Fortuna and Jasmine McCarty Still preserved today and is actively used in places like Tamil Nadu. Modern Day Transformation bheda How the dance works... 3) Natya: combines levels 1 and 2 and can be translated to "dramatic art." This level tells the full dramatic story and derives from the Sanskrit root nrt, which means "to dance". Thank You! What did you notice? Bhakti, Shakti. "Mudras of India: Kartari-Mukha." Mudras of India: Kartari-Mukha. N.p., 25 Oct. 2010. Web. 06 Apr. 2016. Typically performed on a blank stage with a live band. The dancer is often barefoot, and the hands and feet are covered in red henna to accentuate the gestures being performed. The eyes are covered in kohl to add definition to facial expressions during the performance. The costume includes a sari draped between the legs for a fanning effect with the dress allowing the dancers to move liberally. The costumes are elaborate with accents of gold and bright/contrasting colors. Bells hang around the ankles to emphasize specific parts of the story. Donia. "Bharatanatyam." Bharatanatyam. N.p., n.d. Web. 06 Apr. 2016. Quick activity! Exploring the meaning behind the gestures: Similar to learning a new language! 2) Nrittya: the level of "interpretative dance", which adds emotions and vivid descriptions to the basic gestures. It is an interpretation of a poem or work of literature expressed as song. Sometimes incorporates speech! 1:50-2:50 religious dance women given to the temple Philip, Thomas. "Bharatanatyam and the Art of Storytelling." Thomas Philips Weblog. N.p., 15 Oct. 2010. Web. 06 Apr. 2016. A Brief History... bhava Devadasis All conscious decisions that the dancers spend years perfecting. Professional dancers begin learning these terms and movements at a young age. BHARATANATYam 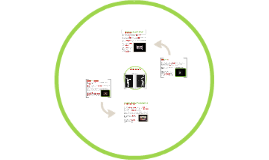 Transcript: Removed elements of sringara from the dance in an effort to be more chaste. She was very vocal in her opposition to any efforts to reform bharatanatyam and viewed it as a dying art form. In 1953, the Balasaraswati School of Dance opened in India to teach and preserve classical dance techniques. 1904-1986 Born in Madras, India to a devadasi family. Her mother and grandmother were both accomplished musicians and encouraged a young Bala to pursue music. As of 1994, the Kalakshetra Foundation is officially an Institute of National Importance. Learned the sadir style of bharatanatyam from Mylapore Gowri Amma and later sought to minimize the sexual undertones of the dance. Tanjore Court Style Rukmini Devi Arundale & Balasaraswati Born to the Brahmin caste on February 29, 1904 in Madurai, Tamil Nadu, India. Rukmini Devi married Dr. George Arundale, a British theosophist in 1920 at sixteen years old. Began her pursuit of dance after meeting and befriending Russian ballerina Anna Pavlova in 1928. Focused on training students who would not traditionally have access to dance, primarily daughters of the upper and middle class families. Rukmini Devi Arundale 1918-1984 She began her dance education at age 4 and first danced publicly at age 7. Founded by Rukmini Devi Arundale and Dr. George Arundale in 1936. Balasaraswati Kept the elements of sringata despite the stigma associated with the devadasis. In 2005, the Bala Music and Dance Association opened in the United States under the artistic direction of her grandson, Aniruddha Knight. Kalakshetra Foundation Bharatanatyam Developed in the south Indian region of Tamil Nadu by the devadasis and was primarily found in the 19th and 20th century temples. Has its roots in Bharata's Natyasastra though Balasaraswati concerned herself more with practical training than with theoretical education. Introduced group performances and fused ballet and bharatanatyam together to form the kalakshetra style of dance. 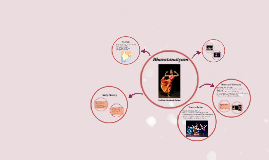