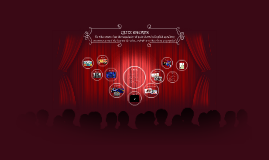 Transcript: History History Definition QUIZ Cheating Popularity Jeopardy! To what extent has the popularity of quiz shows in English speaking countries varied the last six decades, and what makes them so popular? History http://www.jeopardy.com/showguide/abouttheshow/showhistory/ http://www.torontosun.com/2013/08/07/top-10-game-show-scandals http://gameshows.wikia.com/wiki/Game_show http://en.wikipedia.org/wiki/Jeopardy!#First_two_rounds http://www.ukessays.com/essays/media/the-popularities-of-quiz-shows-in-america-media-essay.php http://en.wikipedia.org/wiki/Panel_show http://wiki.answers.com/Q/What_has_made_quiz_sHow_is_so_popular_over_the_years#slide=4&article=What_has_made_quiz_sHow_is_so_popular_over_the_years http://en.wikipedia.org/wiki/Jeopardy 1. What was the name of the first television quiz show? Sources 3. What happened in the late ‘50s resulting in the cancelation of many prime time quiz shows? Popular Shows QUIZ SHOWS 2. Can you name one of the famous persons we have mentioned who has contributed to Jeopardy!? Jeopardy! Conclution 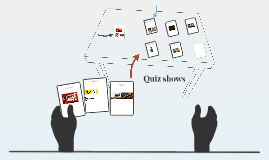 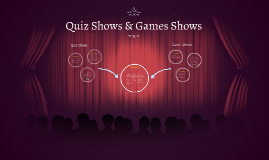 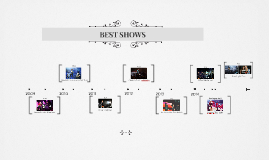 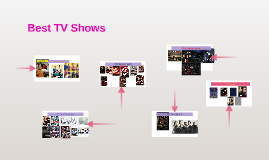 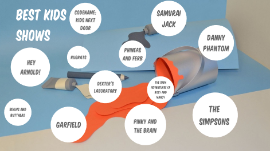 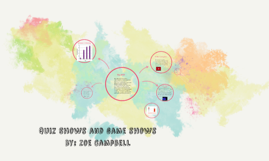 Transcript: Fantasy of Empowerment Achieved through establishing an emotional attachment between the consumer and brand, thus ensuring brand loyalty Quiz Shows and game shows By: Zoe Campbell The American quiz show scandals of the 1950s were a series of revelations that contestants of several popular television quiz shows were secretly given assistance by the show's producers to arrange the outcome of a supposedly fair competition. The quiz show scandals were driven by a variety of reasons. Some of those reasons included the drive for financial gain, money, the willingness of contestants to "play along" with the assistance, and the lack of current regulations prohibiting the rigging of game shows The Federal Communications Commission (FCC) is an independent agency of the United States government, created by Congressional statute to regulate interstate communications by radio, television, wire, satellite, and cable in all 50 states, the District of Columbia and U.S. territories. The FCC works towards six goals in the areas of broadband, competition, the spectrum, the media, public safety and homeland security. The FCC Phenomenon involving the interconnection of information and communications technologies, computer networks, and media content. It brings together the “three C’s”—computing, communication, and content Loyals-watch fewer hours of tv each week than the general population: they cherry pick those shows that best satisfy their interests; they give themselves over fully to them; they tape them and may watch them more than one time; they spend more of their social time talking about them; and they are more likely to pursue content across media channels Increase in Viewing Casuals fall somewhere in between; they watch a particular series when they think of it or have nothing better to do. They gradually watch it from start to finish but are more apt to wander away if it starts to bore them. They may be more likely to conduct conversations or do other household activities over the show rather than give it their full attention. Quiz Show Scandals Allows fans to have a direct stake in the ultimate outcome Loyals, Zappers, Casuals Zappers- people who constantly flit across the dial- watching snippets of shows rather than sitting down for a prolonged engagement Media Convergence 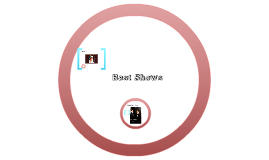 Transcript: Best Shows Based on Sir Arthur Conan Doyle, Sherlock shows the adventures of the always brilliant and arrogant Sherlock Holmes and his companion, Doctor Watson. The story starts off with Sherlock meeting Doctor Watson, who just returned from Afghanistan after serving in the war, and the two become roommates and later, close friends. From then on, the two of them began their adventures together. Characters and Staff General Information Angela Lansbury-Jessica Fletcher William Windom-Dr. Seth Hazlitt Tom Bosley-Sheriff Amos Tupper Rom Masak-Sheriff Mort Metzger Murder, She Wrote is an American T.V. mystery series starring Angela Lansbury. The series, that started in 1984 and continued to 1996, has a total of 12 seasons (264 episodes in addition to 4 T.V. movies). Each episode is a duration of 40 minutes and the series itself is one of the most successful and longest running television show in history with close to 23 million viewers in its prime. Plotline Sherlock is a British T.V show that is a contemporary version of Arther Conan Doyle's famous detective stories. Six episodes, since 2010, have been released and three more episodes are expected to begin production March 2013. Each episode is about 90 minutes. Murder, She Wrote describes the day-to-day life of Jessica Fletcher, a retired English teacher who becomes a very successful mystery writer after being widowed in her early fifties. Despite being a famous writer, she continues to live in the quiet town of Cabot Cove, Maine and maintains her links with her close friends, Dr. Seth Hazlitt, Amos Tupper, Mort Meztger and meets new friends as the seasons continue. Murder occurs around Jessica Fletcher often and she often proves more perceptive than the official investigators, each episode shows her wit and her ability to solve murders. Benedict Comberbatch-Sherlock Holmes Martin Freeman-John Watson General Information Characters and Staff Number 1: Plotline Number two: