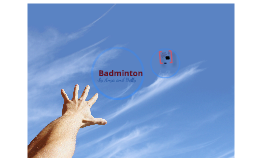 Transcript: Badminton -by Anya and Holly http://www.youtube.com/watch?v=RZ2k-tsX5KE&feature=player_detailpage Badminton is played around the world, but is the national sport of Singapore and Indonesia. Over 2 million people play badminton worldwide, which makes it the 5th most played sport in the world. People of all ages play it, from a rec league, all the way up to the professionals. 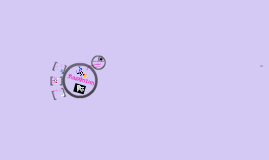 Transcript: Baminton About Badminton Equipment Rules/how to win Conclusion You serve the birdie to the other person It is not very hard to play badminton. Badminton Racket Video Thank you for your attention! Badminton is a very easy sport to play. You have to hit the birdie to the other player. Who ever gets the most points wins the game. The other person hits it back and to you and you go back and forth until someone scores. Athletic Clothes is here Birdie It is very easy to learn. It is very fun to play. video of guys playing badminton. 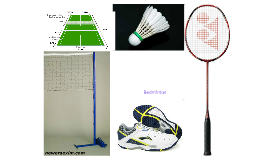 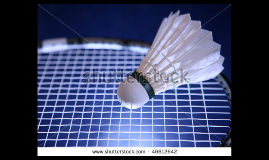 Transcript: Nowadays, badminton is an addiction that has gone beyond Philippine shores and holds in its grip of Filipino communities. Its amazing how badminton has grown in the past few years and its growth is most obviously seen in the large number of badminton courts not only un the National Capital Region, but also in Luzon, Visayas, Mindanao. What really amazing is that only few years ago, not many Filipino's recognized badminton as real sports INTRODUCTION Badminton is lightly expensive sport. But for the beginners, you just need a racket and a place to play. Families can troop together and play together, play regardless of age and gender. It is highly integrative sports together, family, friends, business, and community. But to play the game well or play competitive badminton, one required a certain level of skills and sound basic know- how to do so. BRIEF HISTORY Badminton evolved from a Chinese game of the 5th Century B.C. called " ti jian zi" that involved kicking the shuttle. A later version of the sport with rackets rather that with feet was played in ancient Greece and India. A similar game called Shuttle and Battledore, or "deu de Volant" appeared in Europe during the 1600s. Modern badminton began as "Poona" in India. It was a cooperative game in which players worked together the "Bird" in the air for as long as they could by children in India. "Siam" in Japan. When a net was added it became competitive called "Poona". Chapter 1 : Brief History and Background of Badminton British army officers stationed in India adopted Poona in the 1800s and took it back to England. The army men introduced the game to friends, but new sports was definitely launched there at a party given in 1873 by the Duke of Beuafort at his country place; Badminton Gloucestershine During that time, the name Badminton was attributed to Duke of Beaufort and there upon, Badminton became its official name, and four years later Badminton's popularity soon spread beyond Britain to the rest of the Europe and countries, and the Bath Badminton Club was founded and wrote the first written rules of the game. This version forms the basis for today's game. INTRODUCTION 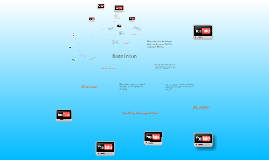 Transcript: Badminton Court Equipment Shuttlecock Or (Birdie) Racquet Rules Score points by landing a birdie in opponents court or if your opponent hits birdie into net or out of bounds Games are played to 21 points with players earning a point whenever they win a rally regardless of whether they served. Skills Forehand A forehand is used when you are striking the birdie on the same side of your body as your grip hand Backhand A backhand is used when you are striking the birdie on the opposite side of your body of your grip hand Overhead A overhead is used when you strike the birdie above your head Serve A serve is a forehand or backhand strike that begins a rally Are you allowed to serve overhead in badminton like in tennis? The answer is NO! History Baminton can be traced back as the mid 1800's in Great Britain. While originating in Britain Badminton traditionally has been dominated by countries like China, Malasia, Indonesia, Denmark, and South Korea Reasons for play Exercise! Badminton requires a lot of strength, speed, agility and flexibility Not to mention a lot of cardio (you think these next guys aren'nt out of breath?) Healthy Competition! FUN!!!! 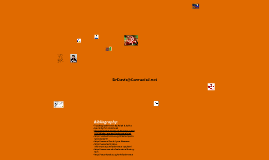 Transcript: By: Anna Johnston and Taylor Thomas Badminton was invented long ago; a form of sport played in ancient Greece and Egypt. Badminton came from a child's game called battledore and shuttlecock, in which two players hit a feathered shuttlecock back and forth with tiny rackets. The game was called "POONA" in India during the 18th Century, and the Indian version returned back to England in the 1860's. Badminton in the world: Badminton quickly spread from England to the United States, Canada, Australia and New Zealand, and made big strides in Europe. Although men first played it, women became enthusiastic about it, and interest now is about equally divided. Badminton is a racquet sport played by either two opposing players (singles) or two opposing pairs (doubles), who take positions on opposite halves of a rectangular court that is divided by a net. Players score points by striking a shuttlecock with their racquet so that it passes over the net and lands in their opponents' half of the court. Each side may only strike the shuttlecock once before it passes over the net. A rally ends once the shuttlecock has struck the floor. "All we need to have is will power and willingness to undergo some necessary training and dedication to prove our metal in this sport." ***http://www.badminton-information.com/badminton_tips.html*** Born March 19,1985, Paula Lynn Obanana has so far gotten a Gold Medal in the Uber Cup Prelims, a Silver Medal in the Sweden International, a Gold Medal in the Norwegian international, and so much more. Paula stepped on the scene in 1995 when she participated for the first time in the Philippine Junior Nationals and had successfully defeated the 4-time champion. From then on, she almost always got first place in every tournament both local and national. While Paula was a national player in the Philippines, she also was a varsity player in De La Salle University, where she attended College. While in College, she was crowned as the record holder for getting a Rookie of the year, and most valuable player. When she moved to the U.S, she longed to do what she loved,play Badminton. She moved to North California to fulfill her dream, to play again. She had the opportunity to join the Coaching team during the Pan Am Jr. Championship held in Puerto Rico in 2009, her team rain Victorious! Teaching Badminton By:Ralph B. Ballou Sports By:Tim Hammond http://mybadmintonbook.blogspot.com/2011/04/who-invented-badminton.html http://usabadminton.org/athletes/paula-lynn-obanana http://wn.com/Paula_Lynn_Obanana http://www.badminton-information.com/badminton_tips.html http://www.usm.edu/badminton/History.htm http://en.wikipedia.org/wiki/Badminton DrDavis@Conroeisd.net "Badminton is like ballet dancing. It requires a lot of control, strength, mind play and measured movement" - Bollywood filmstar Aamir Khan, who also plays good badminton. "A champion has to be disciplined by practicing regularly in the right manner, respect coaches and most importantly ought to have self-belief". -Badminton queen Saina Nehwal on being asked 'What makes a champion?' "When I am playing badminton there are only two people in the world, myself and my opponent". -Erland Kops, former badminton champion from Denmark Bibliography: "I was mesmerized. Until then my game was mostly defensive but after I saw him play, I became more of an attacking player" -Prakash Padukone talking about Indonesian badminton legend Rudy Hartono. Badminton