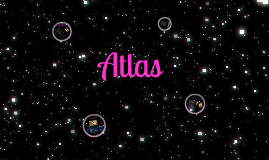 Transcript: Atlas The Story of Atlas Atlas sided with the Titans in their war against the Olympians. When the Titans lost many of them were confined to Tartarus, but Zeus condemned Atlas to stand at the western edge of Earth and hold up the sky on his shoulders. Encounter with Heracles One of the twelve labors of Heracles was to fetch some apples which grow in Hera's garden, tended by Atlas' daughters. Heracles went to Atlas and offered to hold up the heavens, while Atlas got the apples from his daughters. Upon his return with the apples, Atlas tried to trick Heracles into holding the sky forever by offering to deliver the apples himself. Heracles, suspecting Atlas did not intend to return, he pretended to agree with the offer. So he asked Atlas to just hold it while he adjusted his shoulder pads.Atlas set the apples down and held the sky, and Heracles took the apples and ran away leaving Atlas with the sky, again. World Turtle The world turtle is a mytheme of a giant turtle that supports or contains the world. The turtle occurs in Hindu, Chinese, and Native American mythology. Interesting Facts Sources describe Atlas as the father, by different goddesses, of numerous children, mostly daughters. In a late myth, Atlas was transformed into the stony Atlas mountain by Perseus using the Gorgon's head. He is also the constellation kneeler 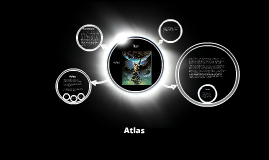 Transcript: Iapetus (from the titans) Clymene (from the oceanids Titan Atlas Atlas Parents Atlas is the titan of astronomy and navigation. He gets punished for supporting Cronus against Zeus Name meaning One who Suffers, Endures, Dares (atlaô) Punishment Atlas sided with the Titans during their War with the Olympian Gods. The Olympian Gods won the war and cast all titans into Tartarus (depths of the Underworld). But Atlas was singled out by Zeus for a special punishment and made to hold up heavens with bare hands and bear their weight on his shoulders forever. Brothers & Sisters Prometheus (Titan god of forethought) Epimetheus (Titan god of afterthought) Menoetius (Titan god of violent anger) Atlas Wife & Kids Heracles had been told that he would never get the apples without the help of Atlas. Atlas was happy to help, since it meant being relieved of his burden. He told Heracles to hold the pillar while he went into the garden of the Hesperides to retrieve the apples. Heracles took the pillar while Atlas went to get the apples. He was successful and returned quickly enough, but in the meantime he had realized how pleasant it was not to have to strain for eternity keeping heaven and earth apart. So he told Heracles that he'd have to fill in for him for an indeterminate length of time. Heracles agreed, But he said that he needed a cushion for his shoulder, and he wondered if Atlas would mind taking back the pillar just long enough for him to fetch one. The Titan graciously obliged, and Heracles strolled off, and never returned. Atlas was married to the titaness Pleione (protectress of sailing) who he had three kids with. Hyades (nymphs of the five stars of the constellation), Hyas (spirit of seasonal rains,) and Pleiades (seven sisters). He was temporarily relieved of this punishment by Heracles, who needed the Titan's help to retrieve the Golden Apples of the Hesperides. http://www.theoi.com/ http://www.greekmythology.com/index.html http://www.theoi.com/Titan/TitanAtlas.html Work cited 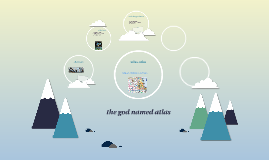 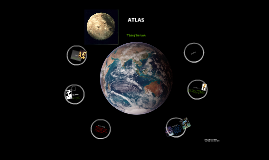 Transcript: photo credit Nasa / Goddard Space Flight Center / Reto Stöckli Govener of the moon with Phoebe. Weopon of choice is the Javelin. Often mistake Atlas holds up the sky not the Earth After the war with the gods Atlas Got a sever punishment. An often misconception is that he holds up the earth. This problem was made when a 18th century map maker drew a man holding the wold on him back. Actually atlas holds up the sky somewhere high in the atlas mountains. ATLAS Atlas Atlas the one of strongest of the titans led them into war againts the gods. Which they ended up losing later on. The Titan Punishment Questions? Atlas Warfare War on the gods For ten years the olympians and the Titans battled . Zues used the cyclopses and hundered headed ones. ( The first children of Gaia) to defeat Atlas and his army These monsters tipped the scale and won the gods the war. The son of Lapetus and Oceanid Asia. Brother to Prometheus, Epimetheus, and Menoetius. Titan of the moon 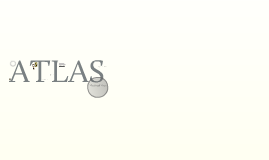 Transcript: ATLAS For his participation in the fight between Titans and gods,he was punished by Zeus to hold apart heavens from Earth. He was the son of Japetus and Clymene and brother to Prometheus and Epimetheus. The First statue was bulit in the Naples Museum (Italy) because it represents the first thought of the earth being in a sphere figure & it also showed the constellations known at that time. Atlas was the second generation of Titans. He was also the god who instructed mankind in the art of astronomy. Atlas couldn't hold the heavens up forever he was relieved when HERACLES came to give him a helping hand and Hercles also needed help with some golden Apples. ATLAS handed the heavens and earth to Heracles to get the apples but wasn't inclined to resume his burden. So HERACLES had tricked Atlas by saying that he needed to scratch his back hold this for a Mintue . ATLAS, not the brightest apple in the barrel, did so while HERACLES made a sharp exit. the burden of holding the heavens became easier when Persues came along and turned him into Stone with the head of Medusa Sites --------------- http://www.greek-gods-and-goddesses.com/greek-god-atlas.html http://www.theoi.com/Titan/TitanAtlas.html http://www.godchecker.com/pantheon/greek-mythology.php?deity=ATLAS FOREVER <3. The Greek Titan 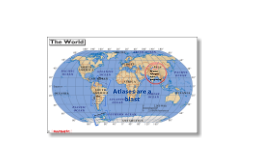 Transcript: There is a SCAVENGER HUNT!! woo hooooo Most atlases show physical terrain of an area The first atlas was published in 1570! And one more thing... Find population, find cities, find capitals.. Have map knowledge!! The uses are.. Atlases help you learn geography! How will you benefit? Atlases are a blast Learn different cultures. Learn about places around the world. Maps were serious business for netherland traders!! HISTORY Abraham Ortelius created the atlas. People wanted atlases so they could learn about the world Study for geography tests. 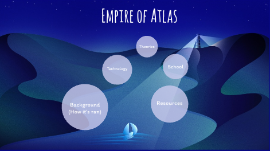 Transcript: Empire of Atlas Structure of our Empire Emperor and Empress are by royal blood, the emperor is always someone from the region of Zeus and the empress from the Region of Hera and they have to get married to become the rulers. Each region has their own king and queen The king and queen will be chosen by the empress every 5 years Background (How it's ran) Our region is based on greek mythology with advanced technology Each region is named after a god or goddess Each region is named after a god or goddess Our region is based on greek mythology with advanced technology Atlas flag primary colors black, white, and gold Resources Natural Resources The natural Resources in our Empire Atlas are: Diamonds, Gold, silver, and a high concentration of Titanium, Thanks to our rich land and high percentage of scientist is that our empire has prosper and become the #1 empire of the world and have achieved numerous advance in technology. Their are chips inserted in the wrists which show your currency, and identity which makes identity theft impossible. Your identity and currency will only show when you want it to show and if someone tries to force you the chip will send signal to the police. You control it with your mind, For Example: If you want to transport money somewhere You will need to think the process in your mind and how much you want to give. Money The language spoken in our empire is English and Greek Our writing system is based on Greek alphabet and English alphabet Language Technology All of our transportation run by solar energy. At night a sort of portable charger will be giving energy to the vehicle to keep it moving, you will need to charge them during day so they can last all night. Flying Horses also known as Pegasus, cars and motorcycles power by solar energy, royal palaces have a teleportation to move between regions and make it easier to go to reunions of the empire. Kinds of Transportation College will be free for everyone as long as they have the GPA for it. GPA requirement would be 3.0 - 4.0 to go to a Private college anyone with a GPA lower will have to go and learn a trait like : Culinary art, mechanic , barber etc. School The three theories in our society Theories Functionalist:Our empire is built to be stable and come together as one. What we have in our empire is respect towards each other for being different. conflict:Although our society is a functionalist and stable there will be some type of commotion Symbolic interventionist:People will always act different with every other person.