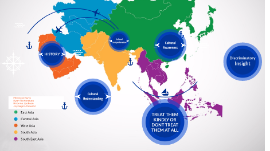 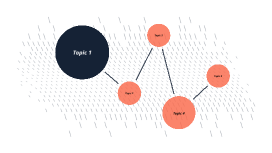 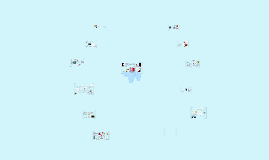 Transcript: "One afternoon, somewhere west of the Batangan Peninsula, we came across an abandoned pagoda. Or almost, abandoned, because a pair of monks lived there in a tar paper shack, tending a small garden and some broken shrines." (O'Brien113) Michener uses rhythm and repetition to create a writing style. For example, in saying "How terribly real was the heroism of Japan, there under the casuarina trees. How fair and loyal the women were, how brave the men", This quote, in communicating the sentiments of the Hawaiians toward the misfortune of the foreigners who were trying to alter their society, it displays to the reader how benevolent and willing the people were to cooperate and live alongside these people. Although their customs, cultures, religions, and overall lifestyles were vastly different, they genuinely felt sympathy towards these people who were strangers among a tightly knit society Constantly uncertainty and danger I An example of diction is when he says: "These she placed in a large calabash, which she carried to the lagoon where no people came, and from the cold waters she dipped a few coconuts shells full of fresh salt water which she tossed on the fillets" (pg 839) "‘A mother is best. A mother knows what is inside you,’ she said above the singing voices.”(Tan 210) "‘A mother is best. A mother knows what is inside you,’ she said above the singing voices.”(Tan 210) This is An-Mei saying that a mother knows her own daughter better than anyone else can. A mother can sense what is inside of you because a mother and a daughter have an invisible bond. She wholeheartedly believes that a mother knows her own daughter the best. The theme of my book compares to the theme of the other books in my group because Theme: In his books, only sometimes does he relate it to his experiences. He doesn't believe that it is his story to be telling. Tim O'Brien is an American author. The war is unsettling, because in this war, there is no light In The Things They Carried, the author uses deep imagery memories from his personal experience just as in Hawaii, although it does not take him 1,000 pages to form vivid images. Unlike Hawaii parallel between life in different time periods, before and after the war by using his emotions throughout his life, he develps a nostalgic and lasting style. Conflict: This quote acknowledges that in a place of great diversity, full of foreigners such as Americans, Japanese, and Chinese, there was intermarriage between the races and they lived together in harmony. Although there may have been some conflicts between different customs, the people coexisted as one and cooperate with each other to form a civilized, functional society The Things They Carried Hawaii by James A. Michener My author was extremely successful in conveying his main theme of interracial harmony, coexistence and tolerance to the reader in a subtle way which made certain quotes stick in their memory. On the other hand, I do not think the author's of the other novels were as successful in doing so with their writtings. I believe that mine was most effective in doing this by keeping the theme constant throughout the novel and using various types of figurative language to develop his style, and as a redult, strangthen his central theme. THE THINGS THEY CARRIED Tim O'Brien was drafted into the war and ended up serving in Vietnam. Another theme presented in the novel is, the story is more important than the truth in storytelling. "(Page 67)In any war story, but especially a true one, it’s difficult to separate what happened from what seemed to happen.” This quote from the story supports my claim because it describes how war stories are never 100% true. They are tweaked either because the storyteller doesn’t remember the story completely or because it isn’t interesting enough. My book compares to The Things They Carried by Tim O'Brien because in both novels, the author used various rhythmic and literary devices to develop his writing style They differ in that O'Brien uses many metaphors and uses symbolism to convey the message of the novel to the reader, while Michener uses rhythmic patterns to create a musical quality and a lot of description to make the setting seem more real to the reader “After a while, I didn’t think it was a terrible life, no, not really. After a while, I hurt so much I didn’t feel any difference” (Tan 51). She had made it so that she could no longer feel the pain inside her, she was numb. Golden revealed in a CNN interview that he had interviewed many Geisha and was inspired by one in particular named Mineko Iwasaki. Style is an important element in the novel. The author, Tim O'brien used colloquial diction, metaphors, and repetition throughout the novel to show his style. Theme: The Joy Luck Club Pt.2 “But in time I realized that this bright, hopeful man of the future, this unique contribution of Hawaii to the rest of the world, did not depend for his genesis upon racial intermarriage at all. He was a 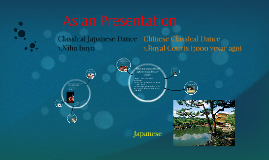 Transcript: 1. Contemporary dance in japan 2. Parasol dance 3.Sword dance What was going on during that time that was significant for the culture? What works of art particularly stand out to you? What are specific characteristics of this art form? Asian Presentation What is your art form and where (what country)? Sometime purpose s social for courting dance, war dance prepare to fighting Who- Odori, Mai When was this art form popular? Why (or what was the purpose of this art form? Japenese Dance in Japan Chinese Classical Dance 1.Royal Courts (5000 yesar ago) What are some cultural influences on this art form? Japanese Nihon buyo Royal court (5000 years ago) 712 AD In 174 AD a new capital was found at Heial that beautiful country Religion- Shinto/ Buddhism/ Christianity Language-The oral languages spoken by the native people Daily lives of people-Being house work stop a couple of times for sustain snces settle back. Nihon Buyo Japanese Dance I think this art is boring because the painting is dull. Classical Japanese Dance 1.Niho buyo