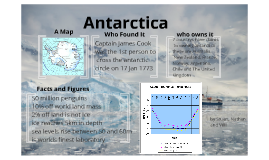 Transcript: 7 countrys have claims to owning antarctica these are Australia, New Zealand, France, Norway, Argentina, Chile and The United Kingdom Captain James Cook was the 1st person to cross the antarctic circle on 17 Jan 1773 50 million penguins 10% off world land mass 2% off land is not ice ice reaches 5km in depth sea levels rise between 50 and 60m is worlds finest laboratory by Stuart, Nathan and Will Antarctica A Map Facts and Figures who owns it Who Found It 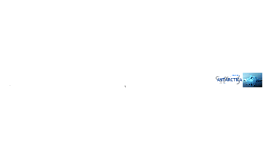 Transcript: ANTARCTICA There are many different types of fish in Antarctica which you can find very interesting. The ice fish is interesting because it has antifreeze which keeps it's body from freezing. There is another fish called cod. It is very big and can grow to the average size of 18-39 inches. The cod weighs up to 10-11 pounds. The cod is usually more on the grayer side. and migrates usually to the Atlantic and Pacific oceans. The cod also has antifreeze in it's body which keeps it from freezing during the Antarctic winters. All fish have a very simple structure with gills, a dorsal fin, pectoral fins, and a tail fin. The color of fish is usually gray, red, black, or silver. Most of the fish there eat krill. Krill is a type of plankton which whales eat also. The fish also eat plants and crabs. Unlike whales and sharks, the fish can go very deep down under water. Fish usually swim in schools for protection. The fish stay in Antarctica in the summer and the spring and migrate in the fall and the winter. These fish migrate to almost all of the oceans, but some fish just go farther away from Antarctica. When they migrate to the other oceans, they lay 5,000 to 5,000,000 eggs. Blue, killer, sperm, humpback...there are so many extraordinary whales in Antarctica. The blue whale is the biggest animal on the earth and could be as big as the biggest dinosaurs. The blue whales have a heart the size of a car. The killer whale is very graceful in the water. A lot of people think the killer whale really is gentle, but it does get aggressive under water. The killer whale is held in captivity the most because it's easy to train. Another whale, the sperm whale, a huge whale that has also been in a famous movie, "Moby Dick".The name sperm came from the oil in the sperm whales head which is made into perfume that's named spermacetti. The sperm whale's head takes up 40% of its body with a narrow small jaw. The last whale is the humpback whale which got its name from little bumps behind its head. The humpback whale is very rare to find in Antarctica's waters, but very easy to find in the Pacific Ocean because of the warmth of the water. In summer sometimes it comes down to Antarctica and stays on the west side most of the time. The whales of Antarctica have a lot of things in common.They all go to Antarctica because of the food source. They are all hunted, usually for perfume and for making bags. They eat krill, fish, squid, and some even eat plankton (krill). They also all migrate to different oceans. No whale stays in Antarctica all year round. Have you ever thought if a penguin is a fish or bird? Why do they call the Little blue the Little blue? You can find out all about it right here. Penguins are remarkable creatures. There are 17 different kinds of penguins in Antarctica. They are the Adele, Black-footed, Chinstrap, Emperor, Erectrested, Fiordland, Gentoo, Galapagos, Humboldt, King, Little blue, Magellanic, Macaroni, Rock Hopper, Royal, Snares Island, and the Yellow eyed penguin. Penguins mostly live in Antarctica, but they also live in many countries such as New Zealand. To have fun, penguins have a game called tobogganing. Even in the water penguins have games such as porposing which is when they come up out of the water then dive back in. The most common penguin in Antarctica is the king penguin. It is also the second largest penguin in Antarctica. It is about four and a half feet tall. Unlike most animals, when a penguin lays an egg the male puts the egg on its feet to keep it off the ice. The female hunts for food, while the male is taking care of the egg. They have to survive the rough winters by huddling in their rookeries. Once the baby penguin has hatched, it's mother has to feed it until it is old enough to feed itself. When an average penguin is an adult, it mostly eats krill (which is a shrimp like creature), fish, and squid. Penguins are eaten mostly by sharks and leopard seals. Early penguin viewers who saw penguins swimming in the ocean wondered if they were a bird or a fish. They found out it was a bird because it has feathers and lives on land. The Little blue got its name because it is small and it has blue eyes. Antarctica is a continent right at the bottom of the earth. It is the fifth biggest continent on the earth and has a total area of 14 million km2. The South Pole lies in Antarctica and it is the coldest place on earth. The lowest temperature of Antarctica that has been measured till date was -128.6ºF in 1983. Even the summer temperatures range -40 to -94º F in the inland and -5º to -22ºF on the coastal areas. Scientists believe that once Antarctica was a part of the southern continents, that is the Gondwanaland and had warm climates. It broke off from the mainlands and drifted towards the south pole. The scientists can say this because of the fossilized plants and animals found in Antarctica. Antarctica soil is covered with over 98% of ice and contains 70% of the freshwater in its icecap. You will 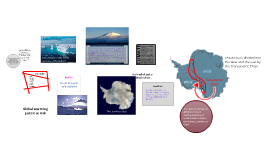 Transcript: It's kind of just a block of ice... Its got Penguins and sealoins! It is quite mountainous. Antarctica has an average elevation of 2,300 meters making it the highest continent on Earth Antarctica is divided into the west and the east by the Transanartic Chain no indigenous inhabitants, but there are both permanent and summer-only staffed research stations Animals fish, whales, sharks, seals, arctic terns, penguins Antarctica has six months of daylight and six months of darkness. For the half of the year that is summer. The lowest temperature ever recorded in Antarctica was -129ºF. The warmest temperature ever recorded in Antarctica was 59ºF. The average summer temperature is 20ºF. The average winter temperature is -30ºF. The highest wind speed ever in Antarctica was when the wind was moving at five meters per second. The wind can lower the temperatures of Antarctica by at least ten degrees. The Antarctic is colder than the North Pole because it warms up faster and it cools down faster. Antarctica gets warmer faster than the Arctic because the Ocean water carries heat from the equator to the poles. The land of Antarctica heats up faster than the waters of the Arctic. Location Deepest lake in the world And one of the largest population 14 million square kilometers (5.4 million square miles), about half the size of the United States and is just slightly larger than Australia. Transanartic Chain Under the surface of Antarctica there is an active volcano: Mount Erebus, which is 3,794 meters (12,447 feet) in height. Located in East Antarctica, on the edge of the Ross Ice Shelf—a place where ice extends far out over the ocean. BUT!!!! CLIMATE This is Antarctica! west Lake Vostok east burried over 2km bellow the ice Global warming puts it at risk 4,400 in summer to 1,100 in winter; in addition, approximately 1,000 personnel, including ship's crew and scientists doing onboard research 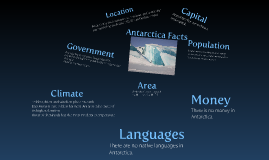 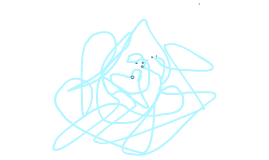 Transcript: area, longitude and latitude oceans surrounding antarctica .Indian Ocean .Atlantic Ocean .Argentina average thickness of the ice Antarctica 6500 feet deep thanks 4 watchin` by jayde the area of antarctica ranges through the seasons. In Summer it is 14.2 miles squared and in Winter is roughly DOUBLE that size. Antarctica`s latitude is 90o00`s and its longitude is 0o00`e. 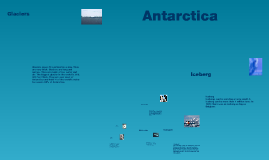 Transcript: Antarctica Glaciers Glaciers move 30 centimetres a day. They are very thick. Glaciers are long and narrow. They are made of ice, water and air. The biggest glacier in the world is 210, 000 feet thick. They are over most of Antarctica and hold ¾ of the world’s water. Ice covers 98% of Antarctica. Ernest Shackleton Ernest Shackleton In 1914, Sir Shackleton and his crew of 27 set sail for the last unclaimed prize in the exploration; Antarctica. Within 85miles of the first crossing on foot of this continent, their ship, the Endurance, was trapped and slowly crushed by the pack ice. They had no communication with the outside world and it took 20 months before they reached help on Elephant Island. Before this happened, Shackleton with a small number of men, had to sail extreme conditions to reach the island. Once they landed, they found they were on the wrong side and they had to make the very difficult crossing to reach help. doughlas Douglas Mawson November 10,1912 Mawson and two others left there base camp to cross Antarctica. His first companion fell into abyss with all the food. The other one died. Mawson travelled alone back to his base-160 kilometers away. He travlled-killometres a day-it took 30 days. He missed his ship by a few hours-it gave him time to recover. Minkie whale Minke whale The Minke whale has a narrow v shaped head, black and white body with a white belly. They have a black or grey back. The female Minke whale is slightly bigger than the male. They feed on squid, krill, copepods and small crustaceans. Emperor Penguin Emperor penguin Emperor penguins are the largest of all the penguin. They weigh over 30 kilograms and are about 1 metre tall. Emperor penguins have a yellow patch of feathers behind the eyes, a black bill with a strip of yellow, they have small bills and feet to cut down heat loss. Transport Transport You can take a ship to Antarctica. You can fly over Antarctica. The most common transport is by motor vehicle. Land-foot (skis, snowshoes) vehicles-snow mobile, bulldozers water – ship air-airplanes and helicopters. Iceberg Iceberg Icebergs can be very big or very small. A iceberg can be more than 1 million tons. In 1956 there was an iceberg as big as Belgium. Mawson 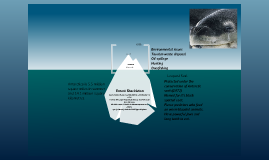