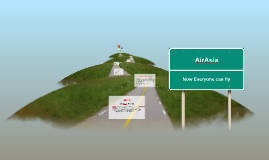 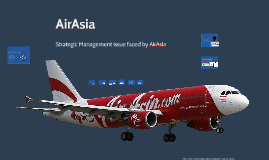 Transcript: AirAsia References ref: http://www.argophilia.com/news/wp-content/uploads/2012/05/fairfares.jpg ref: https://upload.wikimedia.org/wikipedia/commons/6/65/Airbus_A330-203_Qatar_Airways.jpg Threat of New Entrants Porter’s Five Forces Model THREAT: HIGH SOLUTION: investigate other carriers processes in order to perfect their own THREAT: High SOLUTION: As the market is a duopoly, market cant be infiltrated. ref: http://www.tourismtattler.co.za/wp-content/images/Aviation-June.png ref: http://i.bnet.com/blogs/boeing-sugar-volt-dec2012.jpg Conclusion and Solution Bargaining Power of Suppliers THREAT: LOW SOLUTION: No solution necessary THREAT: High SOLUTION: create customer loyalty by offering rewards and reorganise processes within organization to build better customer relations. ref: http://www.metlink.org.nz/assets/new-content-images/_resampled/ResizedImage499221-getting-around-image.jpg ref: http://img.docstoccdn.com/thumb/orig/121100998.png ref: http://image.slidesharecdn.com/messippt-150412010239-conversion-gate01/95/american-airlines-merger-management-in-action-case-study-20-638.jpg?cb=1428818614 Threat of Substitutes ref: https://cannonmascarenhas.files.wordpress.com/2011/12/buyer20persona2021.jpeg Industry Rivalry WHO: AirAsia WHAT: Analysis of the fierce competition faced by AirAsia. HOW: Porters Five Force Framework model FACTS: #Asia is one of the largest low cost carriers to date, expanding rapidly since its relaunch in 2001. # AirAsia services over 61 international and domestic routes. Strategic Management issue faced by AirAsia This model consists of - Rivalry threat - Threat of new entrants - Whether there is substitute - The power of bargaining of buyers - The bargaining power of suppliers AirAsia Website. Viewed on 08/06/2015 http://www.airasia.com/au/en/about-us/airasia-mission-vision-values.page Porter’s Five Forces (2006), Quick MBA, viewed 01/08/2015, From http://www.quickmba.com/strategy/porter.shtml Dobbs, M. E. (2014). Guidelines for applying porter's five forces framework: A set of industry analysis templates. Competitiveness Review, 24(1), 32-45. doi:http://dx.doi.org/10.1108/CR-06-2013-0059 ref: http://resources2.news.com.au/images/2015/02/16/1227221/770266-624001b8-b59e-11e4-8c40-7e903462a11c.jpg Picture reference: http://www.raidersmerciless.com/images/airasia.png Power of Buyers Ref: http://masonmyers.com/wp-content/uploads/2013/02/fiveforcesmichaelporter.png Introduction ref: http://crankyfliercom.c.presscdn.com/wp-content/uploads/2014_11_20-g4change.jpg THREAT: HIGH/LOW This threat is of two options, looking at the type of substitutes SOLUTIONS: Look for ways to build customer loyalty, by implementing reward programs for repeat customers. This analysis has outlined how competitive the aviation industry is. AirAsia's strength lies in its ability to be a cost leader. With this in mind, they may also benefit from evaluating rival organization and what they do best in order to perfect their own processes. This way they will be able to fulfill their mission successfully within the given timeframes. 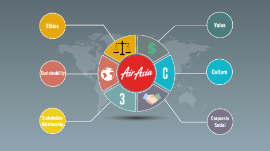 Transcript: C 3 for 2015, special Airasia limited edition t-shirt featuring the Airasia cabin crew and pilot captain uniform designs have been sold to create wider awareness towards cancer #AsiaAsiaMAKNA Corporate Social Position into Minds, Emitting Positive Vibes Organizational Culture Culture 1 - as primary color is RED which shows Bravery and Passion Simple Standard Flight Uniform in RED - as a signage of Airasia 2 "Believe the unbelievable. Dream the impossible. Never take 'No' for an answer" Committed and Unified Team = Tony Fernandez has mentioned this to the employees, in shaping the Airasia culture to what it is today Airasia has been awarded as World's Best Low-Cost Airlines Value the gain profits due to more customers, without neglecting the values to them Healthy,safety, nature and the environment Keeping a drug-free, violence-free workplace Shaping the Environment in Airasia Ethics Where can people find you? Sustainability Sustainability 1. Attractive and Creative tagline. 2. Advertise on Social Media. 3. Well-known Brand. 4. Usage online platform. 5. Market segmentation. Stakeholder Relationship How? - Formal meetings with government officials initiated by AirAsia WHY? To ensure alignment of best interests of the government, aviation industry and the company Government How? Guest feedback through: - AirAsia Travel & Service Centres - Online survey Why? Our guests are the prime reason we operate. Without them, we would have no role to play. Guests How? - #AirAsiaMAKNA events Why? The public is our community. Their support is important to our brand reputation and long-term sustainability. The Community 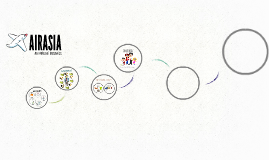 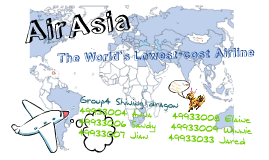 Transcript: Not to expand long haul business because... AirAsia What are the sources of AirAsia’s cost advantage? Expanded the customer base Use corporate reputation to market the long haul business What are the sources of AirAsia’s cost advantage? Q2. spending extra costs in response to the changing of equipment, facilities, human resources, employee training and so on. Group4 Shining dragon 49933004 Anna 49933008 Elaine 49933006 Sandy 49933009 Winnie 49933007 Jian 49933033 Jared Thanks for your attention Transfer strategies Cost Leadership Strategy Why create AirAsiaX Spreading the risks of this venture among investors and got the valuable expertise from them. Intended to facilitate a measure of operational independence Additional cost expenses The advantages of merger AirAsiaX High aircraft utilization -fastest turnaround time Single type of aircraft-reduced the fix cost Outsourcing-IT requirements be undertaken by third party Point to point network-simple operations and cost low Fuel-efficient new plane the original cost advantages may be lost. the position for short haul business may be confused by the adoption of long haul services. The complementary of short and long haul market No, AirAsia should not to expand to long haul business but merger AirAsiaX! Human resources practices Vague position Reduce the operating costs Should AirAsia expand its long haul business and to what extent should AirAsia and AirAsiaX be integrated operationally? Internal operations strategy The World's Lowest-cost Airline No-frills flights-single class Direct sale-website and call center , avoid paying mission Customer service minimal -not serve meals but drinks and snacks can be purchased. -had no baggage transfer between flights External customer service strategy Why create AirAsiaX? Q1. Q&A Secondary airports The integration of short and long haul routes -> make flights more efficient The integration of relevant check-in processes Competitive advantages from Airasia to AirAsiaX mobility barriers Sharing web-based and telephone flight booking systems 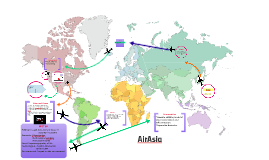 Transcript: To improve their business strategy and ultimately increase their sales and revenue. This is particularly important at the moment as the company would like to buy out Indonesian Airline 'Batavia Air' and expand the business. Recommendations AirAsia AirAsia Vision and Mission Getting everyone to fly * Differentiation and positioning * Refurbishment of the brand -Vision and Mission Porter's Strategy * Niche Market * Positioning Problem Political / Legal- Government Support Security / Customs Economic- Urbanisation New regional centres Increased Income Social- Improving quality of life Technological- Aviation Innovation Online CRM Environmental- Impact on the environment PESTLE * Execute existing model of vision and mission and differentiation. * Expand to Australia. Bargaining Power of Suppliers- Moderately High Bargaining Power of Buyer- High Threat from Substitutes- Medium High Threat from New Entrants- Low Rival Intensity - Moderately High Differentiation * To be the best company to work for where employees are treated as part of a big family. *Create a globally recognised ASEAN brand. * To attain the lowest cost so everyone can fly with AirAsia. *Maintain the highest quality product, embracing technology to reduce costs and enhance service levels. 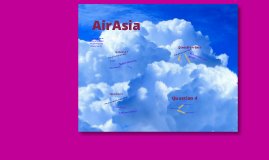