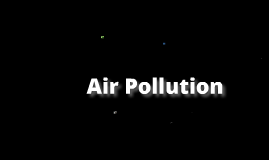 Transcript: Air Pollution (1) NationalGeographic.com (2) AirPollution.org Farmers need to understand our need to decrease co2 so we can stop global warming. We are losing our tundra,losing animals, changing migration patterns, killing our coral reefs, and increasing our sea level. We are polluting our earth with c02 and methane You can reduce these air pullutents by driving less, flying less, recycling and incorperating solar energy. We can also plant prairie grass to help our environment out and to solve some road problems. THE END. We need to Stop polluting our air Issue Prairie grasses give off Oxygen and stores c02 Problem Should we Plant prairie grass? my opinion is yes Recsources Solution The leading Polluters are Cars And Factories (2) (1) 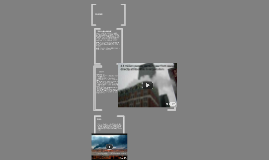 Transcript: WHAT IS AIR POLLUTION? Avoid driving at high speed · When purchasing a vehicle, choose one with high performance in miles per gallon. · Do not overfill the gas tank · Do not refuel in the days of high ozone. Try to do after dark. · Use a vehicle model that is as new as possible, as new models are generally less polluting. · Use an alternative vehicle, such as electric cars, or one that works with other fuel. · Drive smoothly and avoid your car unused for a long time. · If your car is pre-1995 model, then change the hazardous air conditioning system R-12 (clorofluocarbonado) for the R-134-a, which is safer, thereby contributing to reducing the ozone hole. · Keep your car in good condition, with particular attention to the exhaust system. · Make sure the tires have proper air pressure. · Keep good air conditioning system of your vehicle, ensuring that no leaks. · Make fewer trips. Plan your itinerary so as to avoid congested traffic areas. · Reduce the use of gasoline as much as possible, the shape and design of the car can be determinants of consumo. HOW TO PREVENT Is produced as a result of the release of toxic substances. Air pollution can cause disorders such as burning eyes and nose, irritation and itching of the throat and breathing problems. Under certain circumstances, some chemicals found in polluted air can cause cancer, birth defects, brain damage and nervous system disorders, and lung damage and respiratory tract. A certain level of concentration and after a certain exposure time, certain air pollutants are extremely dangerous and can cause serious disorders and even death. Air pollution also causes damage to the environment, having hit the tree flora, fauna and lakes. Contamination has also reduced the thickness of the ozone layer. It also produces the deterioration of buildings, monuments, statues and other structures. Air pollution is also causing haze, which reduces visibility in national parks and other places and sometimes an obstacle to aviation. The main causes of air pollution are associated with the burning of fossil fuels (coal, oil and gas). The combustion of these raw materials produced in the process or the operation of industrial and road transport, mainly. Within the industrial sector would have to differentiate between plants (eg, cement or steel) and electricity production plants (which produce half the electricity consumed in our country). AIR POLLUTION CAUSES 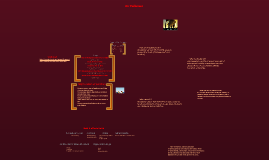 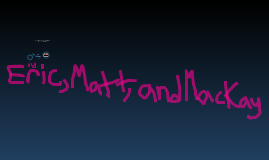 Transcript: Air Pollution What can we do? Recycle Use Rechargeable Batteries Support Local Food Markets Use Reuseable Shopping Bags Use Flourescent Lights Use Cloth Diapers Carpool or Walk Ride Your Bike Buy in Bulk Buy Long-Lasting Products By Eric, Matt, and Mackay Lets improve the environment together!! Thanks for watching!! Recycle!! Use Rechargeable Batteries Use Reuseable Shopping Bags Support Local Ar 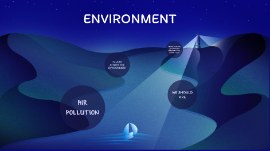 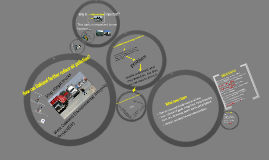 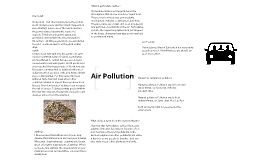 Transcript: What is particulate matter? Particulate matter are tiny particles in the atmosphere that can be in solid or liquid form. They come from factories, power plants, incinerators, vehicles, construction, and fires. They are made up of dust, dirt, soot, smoke and tiny particles of pollutants in the air. Particulates get into the respiratory system and get trapped in the lungs, damaging lung tissue and may lead to permanent injury. Chernobyl: On april 26,1986 chernobyl became the worlds worst nuclear power plant accident. Opperators were shutting down one of the reactors when the power surged causing the reactor to explode. This sent radioactive gases and particles 3 metres high into the atmosphere. More then 120,000 people had to be evacutated from an 18-mile radius from the plant, within days. result: A huge cloud was split into two parts- one part moved northwest toward Poland, Scandinavia, and southwest to central Europe. Second part moved east across Asia, Japan, North pacific and even reached the western side of North America. European countries had to destruct millions of dollars worth of produce, milk, and livestock that were contaminated. For this reason farmers suffered huge financial loses when other countries refused to import there produce from Europe. Even low levels of radiation can increase the risk of cancer. Today scientists predict within the next few decades, thousands of people could develop cancer from the radiation. Car Pooling: I have learned that in Edmonton not very many people car pool. I think that people should car pool more often. Asthma: I have learned that asthma is a chronic lung disease that inflames and narrows your airways. Wheezing, chest tightness, coughing and being short of breathe is symptoms of asthma. When someone has asthma the muscle lining in your airways becomes very sensitive/ over-reactive to substances. Human vs. natural air pollution: Human pollution: Pollution made from man made things. ex. Factories, vehicles, smoking, litter. Natural pollution: Pollution made from natural things. ex. Lava, dust, flood, pollen. Both can be harmful for people and the enviroment. What did you learn from the readers theatre? I learned that Particulates, Carbon Monoxide, Sulphur, Nitrogen, Bad Ozone, Dioxide, CFC's and Toxins are the worst pollutants. I also learned Sulpher and other pollutants can make it hard for some people to breathe , and can also make trees/ other plants grow slowly. Air Pollution 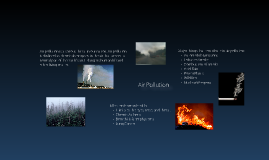 Transcript: Air Pollution Air pollution is a serious threat in our nation. Air pollution is dinfined as chemicals or gases in the air that are not a normal part of the earth's air. It dangers human life and other living matter. Major things that contribute in air pollution: Automobile Emissions Tobacco Smoke Combustion of Smoke Acid Rain Power Plants Wildfires Nuclear Weopons Effect on Human Health: It irritates the eyes, nose, and throat. Chronic Asthma Bronchitis & emphysema Lung Cancer