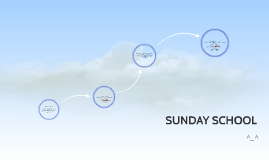 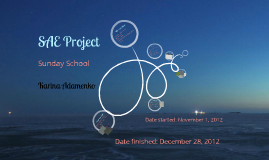 Transcript: supply room When? and Where? Bulletin board SAE Project Did I achieve the goals? Oksana Vuziy: teacher Me: helper Kids: students Oksana and I teaching Sunday school. Karina Adamenko Every Thursday from 7:00pm-9:00pm at my church. Date started: November 1, 2012 Who? and What? Hours spent on project Dress up for Christmas At first it was a little hard to do everything that I said I would do. We had 18 kids and it was hard to keep them all on task but after a while when they found out what was expected of them it was easier. I had a good time doing Sunday school it got a little, frustrating sometimes. Pictures! Date finished: December 28, 2012 Sunday School our classroom Goals -Yes I was able to find crafts for the kids to do. They seemed to enjoy doing them. -Yes and No we didn't always have time to play the games but I was able to find games for them to play. -Yes I also helped Oksana draw the pictures during the lesson and after class ended I helped her clean the room. - Find arts and crafts that match the lesson for the kids to do. -Find games for the kids to play. -Help the teacher with whatever help she needs. Summary 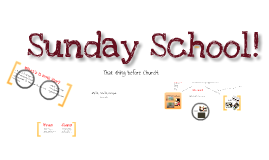 Transcript: That thing before Church! Jellyfish, Starfish, Octopus if ya tie, ya die What is it? Intended to engage learners in an in-depth and purposeful study of God's Word Often happens before the service, but can happen during and afterwards Never recognized as an educational institution Some do keep track of attendance Different kinds of 'em, such as: Pragmatically easier Provides solid Bible teaching Discipleship by propositional teaching Teacher training at higher level Less community connection Schizophrenic class personality Good teacher shortage More administration, less fluid Sunday School! History! Teacher-driven model Time-dependent Organizational structure Children's Pros Cons Originated in Glochester, England 1700's England, most people were too poor to afford an education Kids worked everyday but Sunday, so Sunday was devoted to mischief Robert Raikes did not approve Adult Raikes started a school on Sunday to teach them the "Three R's:" Reading, 'Riting, and 'Rithmetic, the Ten Commandments and good morals Naturally came to be called "Sunday School" This eventually spread throughout England, and eventually the U.S. Due to denominational differences, cities with multiple churches would have a school in each church instead of just one for the city, which brings us to today Youth Spiritual Growth Discipleship Fellowship Ministry Worship What's it look like? At church, formal classroom Lesson and activity focused Unlimited number (as many as can fit in the room) On campus Helps Produce: 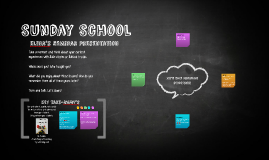 Transcript: Know Your Students How long are their attention spans? What kind of learners are in my classroom? (Auditory, kinesthetic, visual) What kind of activities do they enjoy doing? Connect teaching to explicit examples from their life experiences. Get real with them. Key Take-away's Take a moment and think about your earliest experiences with Bible stories or Biblical truths. Where were you? Who taught you? What did you enjoy about those lessons? How do you remember them all of these years later? Turn and talk. Let's share! Sunday School Be Flexible: If something isn't working, try something new! Let's Talk Discipline strategies! The curriculum is a guide, not a script. The writers of the curriculum do not know your students. Only you know your students. Elina's Seminar Presentation Awards: End of the month reward system, only if they get the appropriate amount of points. Consistency is key. Erase-a-letter: Start off with a word on the board, erase a letter everytime the students are off-task. Discipline. Recognize why you struggle with discipline. Are the students engaged? Students who act out often need to be engaged. Stick to your strategies. Develop routines. Set a consistent classroom environment. Engage the students. Quiet Signal: Use of a bell, chimes, etc. to capture the student's attention fast. Always keep a calm, consistent, steady voice when getting the students' attention. Competitions: Table vs. Table Teacher vs. Table 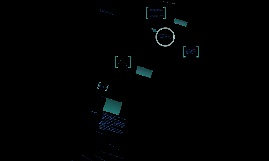 Transcript: Lesson 1- Our Different World: Vocabulary For Lesson 1: Belief: An Idea a Person Feels is True, Any Belief can be True or False. Spiritual: Anything Haveing to do with the Hidden World of Our Soul or an After Life Allah: The Creator of the Universe Religion: A Group of Practices and Beliefs that a Comunity Follows so They Have Something in Commen Lesson 1: Just beacause we belive in something doesn't make it right Islam is NOT a religion, it is a way of life Islam Teaches us that we have to respect each other A Muslim is not allowed to Force someone to accept Islam. Everyone must choose to accept Islam or Reject it. Questions For Lesson 1- 1.) A Muslim ______ allowed to _______ another Person to accept _______. 2.) Islam is NOT ____________ it is a ______________. 3.) Why is Islam not a religion? 4.) Why are we not allowed to Force Someone into accepting Islam? 5.)Why Should we respect everyone? Lesson 2: Learning About Islam Lesson 2 Vocabulary Muslim: A Person who surrenders to Allah and is finding peace Islam: To Surrender, to submit, or give in to someone and/or to find peace Rasul: Arabic word for messenger Muslim: A person who surrenders to Allah and is finding peace Lesson 2 Facts There are 3 root letters in the words Islam and Muslim, both being the same... they are S, L, and M Islam has 2 important meanings (they are in the definitons shown previosly) In Islam we surrender to Allah so that means we have to try to do everything Allah has asked us to do and don't go against his rules so overall that means we surrender him. In Arabic if you know the root words then you can make any word by adding some more letters. Lesson 2 Questions: 1.) Who is a Muslim? 2.) _________ is the language people in Arabia 3.) What are the root letters in the words Islam and Muslim? 4.) What is one of the meanings of the word Islam? so that... was the END of lesson 2 Lesson 3: What is Allah's Proof? Lesson 3 Vocabulary Idols: Statues Hindu's call Gods Lesson 3 Facts When someone asks you to prove somthing then asking you why is this so, well for example you can't just say I am always right and someone asks you how do you know your a correct and this was a long time ago people didn't know how to read and write so the man said I wrote this book which contains eveything I am saying so everyone belives except for one man. One day the man who doesn't belive the so-call "know-it-all" he so my house is on sale who wants to buy it and everyone say you don't have a house and he says yes I do and they ask for proof and he shows them a brick and says I built it myself but of course it doesn't prove anything so he tells them they should have had the same thing going through they're mind when they were thinking of the "know-it-all" man. Everyone is born with love and feelings. Allah is not a person or a thing like us. Allah took his time to make the universe and to make us so we should take our time to make things too. Allah is one with no companians or family, just think about it, wouldn't it be silly if the creator of the world had a family like us, i mean we can't even try to compare ourselves with him. Allah isn't a boy or a girl and we only call him he because do think it would be nice to call Allah an "it", no, it wouldn't be very nice. Lesson 3 Questions 1.)What is proof? 2.) What is the proof of Allah's Powers? 3.) How do you say " I want Allah to protect me from the bad Shaytan" in Arabic? 4.) Why do we call a "he"? ...and THAT is the END of LESSON 3 Lesson 4: What is a Revelation? Lesson 4 Vocabulary Revelation: Any Words or Messeges given by Allah to a Person Nabi: A Prophet Quran: The Last Book from Allah to the World it means somthing you read. Lesson 4 Facts: Only some of the nabi could be prophets and messengers at the same time (like Prophet Muhammed SAW) At first it would be hard for the Prophet or Messenger to convince people but at the end they had accomplished their mission Allah had asked them to do. Only _______ get to be prophets and ____________. How many Books did Allah Sent to us? Lesson 5- Where did life come from? Lesson 5 Vocaulary Universe:What we callt the stars, planets, moons, and galaxies all together. Dinosaur: Giant Reptiles that lived before people Meteorite: Big Chunk of Rock the falls from Space to the Earth. Jinn: A type of living creature, they are made of fire we can't see them but they can see us. Angel: Another type of creature, they are made of special light rays called noor, They are the workers in the Universe listening/doing everything Allah has/had asked them to do. Lesson 5 Facts: Some of the First Creatures Allah made were the Microscopic ones. First He Made Planets then He Made Fish, Amphibian Lizards,and much later Dinosaurs There are two types of Jinn... good Jinn and bad Jinn. The good jinn leave us but on the other hand the bad jinn follow us and whisper bad thoughts into our head. The Angels were worried because they thought that if Creatures had a choice to choose what they 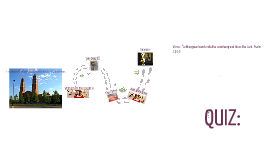 Transcript: VESSELS OF THE CHURCH THE CHALICE The Paten ARK AND DOME Incense: Verse: "Left up your hands into the sanctuary and bless the Lord. Psalm 134:2 QUIZ: In the Name of the Father, the Son and the Holy Spirit, One God Amen. 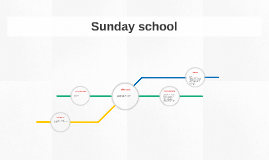 Transcript: Answers Rufus- Jackson Paul- Khiana bible verse https://www.biblegateway.com/passage/?search=Acts+27 line them up https://docs.google.com/drawings/d/1xcRJvmN46syYo4I947rovOGPta35rXpGfpUlpOyVP7U/edit Sunday school intro to bible story #1 Rome #2 they waited too late to leave #3 not to be afraid, that god would save the lives of everyone on board #4 he told them God's promise to save their lives; he encouraged them to eat for their strength; he acted bravely self #5 all were saved #6 answers will vary # 1 where was paul traveling to? # 2 why did their ship have trouble? # 3 what did the angel tell paul? # 4 how did paul encourage everyone? # 5 what happened because everyone obeyed god? # 6 how would you have felt if you had been on that ship with paul? Reveiw questions 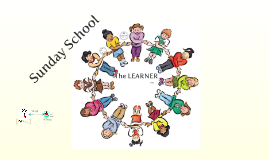