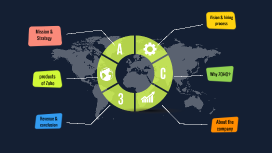 Transcript: A C 3 60 Million+ users across the globe Posted revenue of 450 million dollars revenue in 2019 Aimed to create its own operating system for business Creates 20% of employees from its own education university Has headquarters in Chennai and R&D centers in Thenkasi and Renigunta Footprint on 180+ countries About the company Why ZOHO? 1 History Sridhar Vembu bootstrapped the company in 1996 as Adventnet and later changed to Zoho in 2006. Initially it released product CRM in 2005 and later followed by Projects, Creator and Sheets in 2006 followed by many applications. In 2017 Zoho launched Zoho One, a comprehensive suite of over forty applications. Zoho has reached 50 million customers in early 2020. 2 Motto Producing high quality products at affordable price. Affordable even for small scale companies. To stimulate economic growth in rural areas. 3 Ground for remote areas Why remote areas? Low Cost infrastructure and can bring economic growth to rural areas. Motive? Prioritize its employees and companies ahead of profitability. Distinctive Thought: Vision & hiring process Vision: Zoho’s suite of products currently serve 80% of customers’ OS needs. The vision is to make Zoho a one stop destination for all OS needs, while touching a user base of 1 billion (from the current 20 million) in over a decade. Hiring employees based on skills and not based on education universities. Zoho's Strategy: Continuously working to improve existing products and also provides better products with more features for customers. 100% privately owned Mission & Strategy Zoho's Mission Company would Serve customers with top-notch service in their industry while facilitating extraordinary growth and sustainable profitability with cutting-edge standards products of Zoho Zoho One Zoho People(User friendly HR software application, belongs to a complete zoho suite of business solution for small business ) Zoho Books(this software is designed to help business owners to organize finance better) Zoho inventory(Gain effeciency in thier inventory system through smart process automation) Zoho CRM(this platform boosts business growth by building great customer relationship) Revenue & conclusion Revenue: Chennai based saas (software-as-a service) firm has recorded a 37.1% growth in operating revenue to 3,308 crore in Fy19 from 2,412 crore in Fy18. At the end of Fy19, its total assest increased by 31.6% to 4,178 crore from 3,174 crore Fy18 and they proved that their assests were utilized effectively. Conclusion: Scaling companies without external capital rare in India. Sreedhar vembu is one such co-founder whose firm Zoho kept growing year after year without any external investment. In business if we learned how to survive and we could thrive long term of business thats the first thing of business. 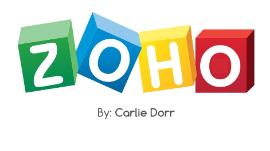 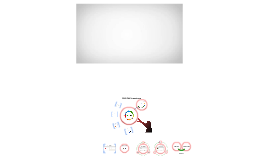 Transcript: In a typical Business to Business (B2B) scenario, Account represents a Company or a Department within the company, with which your organization is planning to do business in future. An account stores the company address, number of employees, annual revenue, and other details. Opertunity Management Accounts Detail Confirmed Potential Contact Detail Finance Manager Contacts are people with whom you communicate, either in pursuit of a business opportunity or for personal reasons. In Business-to-Consumer (B2C) scenario, contact is the most important information for acquiring customers, whereas in Business-to-Business (B2B) it is a part of the organization details with which you are doing business. Leads are raw details about individuals or representatives of organizations collected from trade shows, seminars, advertisements and other marketing campaigns. Contact Management ZOHO CRM Terminologies LEAD MANAGEMENT New Potentials Accounts Management Lead To Account Contact Detail Director Account Detail In any sales organization, potentials are the most important records to generate the real revenue for the organization. In a typical B2B organization all potentials have to undergo a complete sales cycle, which starts with identifying the hot prospect and ends with prospects being won or lost. The activities within this sales cycle that has to be completed are; sending product information to potentials, product demonstrations, sending sales quotations and business negotiations. PROFORMA INVOICE Contact Detail Purchaser Cancelled Potentials QUOTATIONS ZOHO CRM Dashboard ACCOUNTS 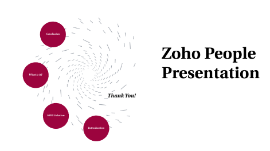 Transcript: Zoho People Presentation Thank You! Introduction What percentage of employees are confident they can find a better position that pays more? A. 65% B. 42% C. 28% D. 11% A. 65% HRIS Solution What is Zoho People Manage HR and data Improve performance evaluations Document management Engage Employees Why did we choose this? Why did we choose this? Easy to use Any company can use it Great reviews www.getapp.com www.softwareadvice.com www.reviews.finance.com What is it? How ? Choose your plan Customization Integration Centralized and secure Multiple language support Fits your needs! Enables you to connect with customers Why? Conclusion Conclusion Manage HR data and processes Easy to use and trusted Customizable Any company can use it 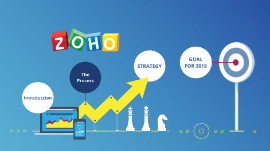 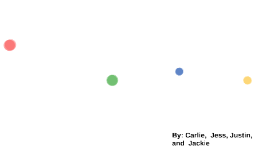 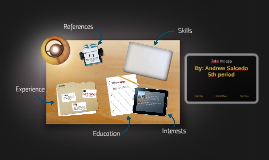 Transcript: Zoho is a free app to use and all you have to do is sign up What is Zoho: Web Host Magazine & Buyer's Guide - Editors' Choice for January 2010 Ways its used: Zoho is an application that offers you business program.They are apps that help manage your business. Features City, State By: Andrew Salcedo 5th period Awards . Zoho just offers business programs that help you manage you business Email Address They have sales&marketing, customer support, email & collaboration, and finance apps Zoho wins in InfoWorld’s 2009 Technology of the Year Awards Zoho has ten million users Telephone . The Best in Email - The 2011 Reader's Choice Awards Zoho the app References Interests Experience Education Skills 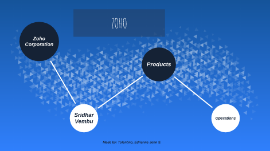 Transcript: ZOHO Made by: Tolentino, Edrianne John S. Zoho Corporation - is a Pleasonton, California-based information technology and business management software as a service (SaaS) developer.[2] The company was founded by Sridhar Vembu and Tony Thomas in 1996, and has development offices in India. Zoho Corporation History -From 1996 to 2009, the company was known as AdventNet Inc. In 2009, the company was renamed Zoho Corporation after its online office suite of the same name. History Sridhar Vembu -Sridhar Vembu is the CEO of Zoho Corp. (formerly AdventNet Inc.), the company behind the Zoho suite of online applications. He co-founded AdventNet in 1996, and has been CEO since 2000. AdventNet has transformed itself from a modest beginning as a software company serving network equipment vendors to a be an innovative online applications provider. It has maintained growth and profitability, without needing outside capital. Prior to AdventNet, Sridhar worked as a wireless systems engineer at Qualcomm, Inc. where he was fortunate to work with some of the leading minds in wireless communications. He obtained his Bachelor's degree in Electrical Engineering from Indian Institute of Technology, Madras, and PhD in Electrical Engineering from Princeton University. Sridhar Vembu Location -The company is headquartered at its largest campus in Estancia IT Park in Chennai, Tamil Nadu, India. Formerly, it filed headquarters in Pleasanton, California, United States. The company also has offices in Singapore, Japan, China, and other cities in India, namely New Delhi and Tenkasi. The bulk of its sales and support operations are carried out from its office in Chennai, Tamil Nadu, India and the Philippines.[1] In addition, the company has research and development centres in Singapore, Beijing, China and Tenkasi. Location Products Network Management Framework IT Management Products Zoho Office Suite Products Network Management Framework -Zoho Corporation started as a network management framework provider for telecommunications and network equipment vendors. Initially the company developed other software such as an SNMP API stack, an element management system (EMS). The NMS framework is marketed as WebNMS which competes with similar NMS products from HP, CA and few other enterprises. Network Management Framework IT Management Products Until 2003, the company's business focused only on large and enterprise class customers. During the slowdown[clarification needed] in 2003, and as a plan to bring in more revenue, the company ventured into SMB market by offering commercial IT management products which were either stripped down versions of their WebNMS framework, or built on top of WebNMS codebase. The company marketed their IT management products under the ManageEngine [5] branding. Their first product released under the ManageEngine brand was a network monitoring software called OpManager 4.0 which competed with WhatsUp Gold and other monitoring products. Following OpManager 4.0's success, a host of other related products were developed and marketed targeting various segments of IT management. The ManageEngine became a commercially successful brand in the following years. IT Management Products Zoho Office Suite -In 2005, the company launched Zoho Office Suite, which includes a web-based word processor, a spreadsheet program, a mail program, a calendar, contacts list, and other business-oriented programs.[6] The Zoho Suite products have both a free edition and paid editions. Zoho Office Suite Operations The company launched and grew without outside funding, a term known as bootstrapping, and is held privately. It does not disclose its revenue publicly, but as of 2012 it was believed to be a quarter of Salesforce. The company has various Zoho Corporation Partner programs across the world. Operations