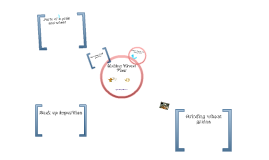 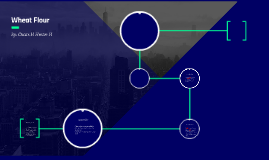 Transcript: There are two bran colors (red/white) Red is for high protein breads such as wheat bread White bran is used for softer such as flat bread By: Oscar.H Hector.H Kernel Texture Growing Season Bran Color the kernal texture is classified as hard or soft . hard wheat is hegher in protein than soft wheat and therefore produces more gluten. each kernel contains three parts, the bran, endosperm, and germs. wheat flour is milled from hard white or red spring. kernel to flour Wheat is either grown in winter or spring Winter what is grown where winters are mild Spring wheat is planted in spring and havested in late summer, because winter is to severe for winter wheat to grow Winter wheat has a 10-12% protein rate and has medium gluten strength Spring wheat has a 12-14% protein rate and has a high glutn strength hard wheat is seperated into five parts (bran, middlings,clear flour,wheat germ,patent flour). the process is reducing the kernels by rollers and sifters. they add nutrients to enrich the flour. Wheat Flour 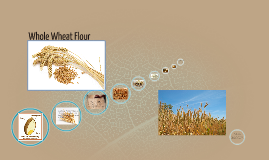 Transcript: Endosperm Due to the present oils in whole wheat flour, the shelf life is relatively shorter then refined flour. It is important to store whole wheat flour in cool dark places to avoid spoilage Bran The "Bran" is the kernels tough and fibrous outer shell. The shell acts as a protector while keeping out insects while in the growing stages. It's contents are essential fiber, B vitamins and antioxidants. Germ Consuming the entire kernel adds health benefits while also resulting in a stronger flavor. White flour, as many are accustomed too, is produced with the germ and bran taken out, resulting in what is essentially just the endosperm. (Starch + Carbohydrates) Whole Wheat Flour Works Cited The 2006-2011 World Outlook for Whole Wheat, Cracked Wheat, Multigrain, and Other Dark Wheat Breads Excluding Frozen Bread [electronic resource] Using whole wheat flour in bread products add a full bodied texture that may be a bit heavy. In regards, many formulas call for a mix between whole wheat and refined flour. The "Germ" contains mostly healthy fats combined with small amounts of B vitamins and minerals. It is the very embryo that will transform a kernel at the early stage into a plant. The "endosperm" is the largest part of the grain and acts as the plants food source in the early stages of growing. It's contents are mostly starch aswell as carbohydrates, protein and small amounts of minerals and vitamins The term "Whole" refers to the use of the entire wheat kernel, being the bran, germ and endosperm 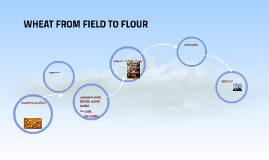 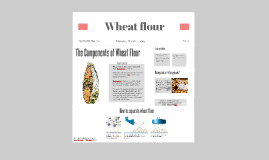 Transcript: Wheat flour has three components in it, Bran, Endosperm, and Germ. Bran is the outermost part of the kernel. It contains most of the fibre and is a good source of vitamin B. Endosperm is made up of mainly starch (carbohydrates). It contains most of the protein, some vitamins and minerals. The germs that you're thinking is probably the bad one right? Well in this case, it's great! Germs are the embryo or sprouting section of the seed. It has a source of vegetable oils and rich source of Vitamin E and complex B-vitamin Homogenous or Heterogeneous? By: Angel Lu, Emma Sam-Sam, Farah Madon, and Kiersten Tomas More wheat flour is produced then any other type of flour One bushel of wheat contains approximately 1 million individual kernels Approximately 3 billion pizzas are sold in the U.S. each year What do you call a flying bagel? Plane bagel! What did the boy give to to the girl? Flours! Since wheat flour is a powder, it's hard to decipher whether it's homogenous or heterogeneous. After thinking about it with my group. We think it's both heterogeneous and homogenous because of a couple of reasons. one reason that it's homogenous is that after putting through a sieve, it's homogenous. one reason that it's heterogeneous is that you can sometimes see chunks. $2.75 "Don't eat anything your great grandmother wouldn't recognize as food." -Michael Pollan How to separate wheat flour Monday, March 7, 2016 The Components of Wheat Flour Subtitle Facts and Jokes Vol XCIII, No. 311 Wheat flour 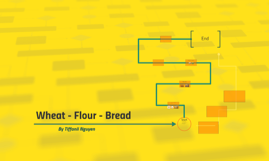 Transcript: winter wheat Start History of Wheat Wheat - Flour - Bread Introduction of Wheat History of Wheat Process of Wheat growing (climate conditions) (soil conditions) By Tiffanii Nguyen Wheat is the most important food crop There are two kinds of wheat, spring wheat and winter wheat Hundreds of millions of people in the depend on food from wheat plants Wheat is a member of the grass family Wheat covers more of Earth's surface than any other food crop Farmers grow more wheat grain then they need for themselves Introduction of Wheat Process of wheat growing End Climate Conditions Fairly dry and mild climate Extreme heat or cold will destroy both spring and winter wheat Very wet or very dry wheat will also damage the wheat of any kind Winter wheat is planted as early as the 1st of September and as late as the 1st of November Spring wheat is planted as early as early March and as late as mid-April Spring wheat has fewer weather hazards than winter wheat because it has a far shorter growing growing period then winter wheat summer wheat Wheat was found in pits during the European settlement is Australia over 8,000 years ago During the 10000 BC wheat was fond by cave men Wheat is the crop that is a cross between 3 different grass species After wheat was found by cave men, they ground grain of wheat against rocks to make flour Soil Conditions Wheat grows best in kinds of soil called clay loam and slit loam Soil should have decayed organic (animal and plant) matter to provide food for wheat plants farmer may add a form of fertilizer or lime if soil lacks nutrients Erosion by wind or water can remove nutrients from soil If soil becomes acid, wheat will not grow which will make farmers regrow their wheat 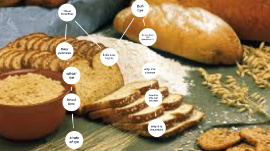 Transcript: kinds of rye kinds of rye bread time bread time wheat rye wheat rye rye vs wheat rye vs wheat flour process flour process Wheat bread flour Wheat bread flour what do you know what do you know hello I am Sophie hello I am Sophie Buh bye Buh bye Do you have any Questions??? Do you have any Questions??? why it is chosen why it is chosen how this info can be used how this info can be used why it is important why it is important 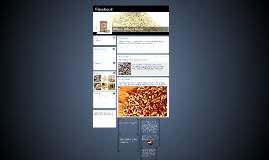 Transcript: Click "Share" to get the full-conversation. Berry says he "feels crushed" because home cooks..... Work Experience Shared a Photo A Milling plant. This is what a Whole wheat berry looks like! Whole Wheat Flour After all of the procedures are done in the milling process, the thick whole wheat flour is mixed in with bleached white flour to add nutrients, color, and texture which is lost in milling. In fact there is about nine other steps done in the milling process like sifting, organizing the flour, and rolling, These wheat berries have a variety of types. Hard Red wheat, Hard white wheat, and soft white wheat. These are just for whole grain flour. Photos None like comment share To make the flour, grinding is done to the berries, which is then milled. None like comment share Each step that is done in flour making is an important part in the result. There are multiple categories and steps that are done in milling, and they each add something to the flour that we need to make recipes. Whole wheat flour is a healthy alternative to normal flour, and it helps the cooking just as much Status Update Once the crushed berries are mixed with white flour it is ready to be packaged and shipped off to grocery stores. New Headline: Berry Talks to Reporters The making of white flour is much different. It is bleached with flour bleaching agents that restore all of the needed flour qualities that are changed after milling. The process of milling is rolling and sifting until the flour is the intensity and color that we want. Baking and cooking. Whole wheat flour ( wholemeal flour) is a powdery basic substance used for cooking. It is made from Whole wheat berries. Facebook like comment share Education Lives In Shared a Link Interests