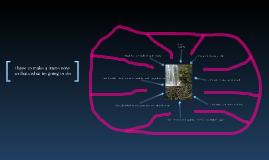 Transcript: I like waterfalls They are fun to walk under The ones in maui are very cold The water hurts when it hits You I wish there where waterfalls here so i could do this again I could of died if a rock came over the side and hit me My friend fell into a hole by this waterfall and i luaghed at him Waterfalls are made by water that falls I have to make a frame now so thats what im going to do This is inside an A and its part of the frame this is now in a G and its very tiny this is now in the other part of the same G, but im going to talk about waterfalls again because they are nice and made out of water 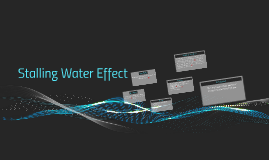 Transcript: Conclusion Stalling Water Effect Materials Why Does this work? Procedure Basically your cameras frame rate is synced up with the rate of the vibrations of the water so it appears to be frozen or still. Now if you play a 23 hz sine wave your frame rate will be off just a little compared to the sine wave causing the water to "move backward" or so as it appears. You can play a 25 hz sine wave and cause the water to move slowly forward. Camera capable of recording 24fps Water/ water source Speaker Sound modifier capable of changing frequency. Hypothesis Question? We think the effect will work as long as we can match fps to hz. Can we create a stalling water effect by matching the hz of sound to the fps of the camera? First we will gathered all the materials we need. Then set them as shown in the video. Open the water hose so water can be release. Admit the 24 hz sound. Attempt to match the fps to hz Collect data Get a 100 on our final! The effect would have worked if it wasn't for the "Smart" phone. 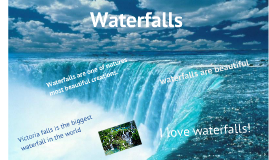 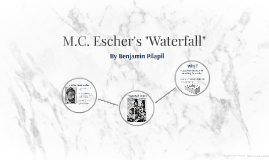 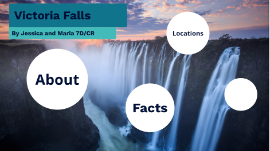 Transcript: Victoria Falls By Jessica and Maria 7D/CR About About Victoria Falls (meaning "The Smoke that Thunders") is very unique as, it is a few waterfalls joined up together to perform as one giant fall. This waterfall, is about 108 meters high and its combined width is around 1708 metres. It is originally named 'Mosi-oa-Tunya', but it is also known as 'Victoria Falls' as it is easier to pronouce and remember the name. Gallery Facts Facts Victoria Falls, is in the Zambezi river and it flows from Zambia to Zimbabwe. Victoria Falls, is the largest waterfall in the world. This waterfall, has already started cutting out another gorge. In the months between September and December tourist can go to the edge of the water fall. This pool is called 'Devil's Swimming Pool'. The Zambezi River (which forms the Victoria Falls) is the fourth largest river in Africa. Locations The Victoria falls is located near the border of Zambia and Zimbabwe. Its exact location is in the town named Livingstone. It is a waterfall located on the Zambezi river. The first Europeon that saw the falls was David Livingstone on the 16th of November 1855 from an island that is currently known as Livingstone Island (one of the two rivers that are located in the middle of the Zambezi River. Locations Location On Map Location in Africa Thank You For Watching Thank You For Watching 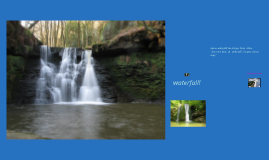 Transcript: waterfall! Some waterfall are bigger than other. There are tons of waterfall . Do you know any ? hope you joy the video 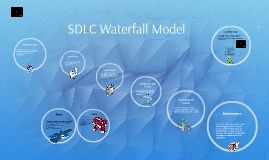 Transcript: Once the functional and non functional testing is complete, the product is released to the market. Requirements Spec identifying what a piece of software or item to be developed must have, including all it’s possible requirements. Feasibility Study Implementation The requirement for specifications from the first phase are prepared and used to design the system architecture. SDLC Waterfall Model T - Technical E - Economical L - Legal O - Operational S - Scheduling System Design All units developed in the previous stage are implemented into the full system and then that is tested separately. Maintenence . an evaluation and analysis of the potential of the proposed project which is based on extensive investigation and research to support the process of decision making Developent Of System Intergration and Testing System design helps produce several small programs called units which are integrated in the next phase. Each is tested for it’s functionality– this is called unit testing There are often some issues which become apparent following the release of the product, these are parched later on often over the internet. This stage also allows the developers to enhance the user experience. Cons No working software produced, until late in the life cycle. Lot’s of risks Poor model for longer projects. Difficult to measure progress within stages Integration done at the very end, doesn’t allow technological or business bottleneck early. Pros Phases are processed/completed at the same time Processes and results are well documented Easy to arrange tasks Works well for smaller projects Clearly defined stages Easy to use and understand 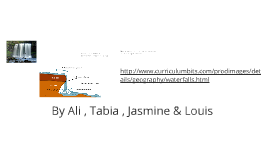 Transcript: Waterfalls The definition of a waterfall: A steep descent of water from a height. Waterfalls are found in the upper course and are formed due to gradual erosion. http://www.curriculumbits.com/prodimages/details/geography/waterfalls.html By Ali , Tabia , Jasmine & Louis