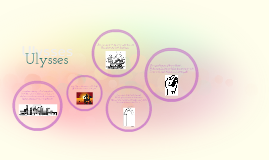 Transcript: "I am a part of all that I have met; Yet all experience is an arch wherethro’ Gleams that untravell’d world whose margin fades For ever and forever when I move. " Ulysses "There lies the port; the vessel puffs her sail: There gloom the dark, broad seas" "One equal temper of heroic hearts, Made weak by time and fate, but strong in will To strive, to seek, to find, and not to yield." Experience "For always roaming with a hungry heart Much have I seen and known; cities of men And manners, climates, councils, governments, Myself not least, but honour’d of them all;" Ulysses "To sail beyond the sunset, and the baths Of all the western stars, until I die." 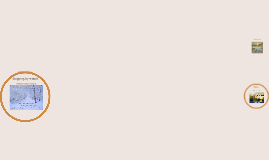 Transcript: Stopping by woods But I have promises to keep... Ulysses goes ever on and on... The Road Death closes all... 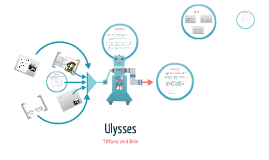 Transcript: Example: First stanza: " And drunk delight of battle with my peers," " on shore, and when Through scudding drifts the rainy Hyades Vexed the dim sea. I am become a name" -in first stanza trying to reflect on his old days Allusions Through Ulysses' talking about how he needs to live his life to the fullest through reflection on his previous adventures and looking ahead to new adventures. Tennyson was trying to convey the message that you should not waste your life. He believe that life is a rare gem that should be taken advantage of. The overall meaning of the poem is do what makes you happy. "Eras of Elegance - The Victorian Era (1837-1901)." Eras of Elegance. N.p., n.d. Web. 07 Apr. 2013. Everett, Glenn. "Alfred Lord Tennyson: A Brief Biography." Victorian Web. N.p., 30 Nov. 2004. Web. 07 Apr. 2013. "Lord Alfred Tennyson." Poets.org. N.p., n.d. Web. 07 Apr. 2013. He talks to his workers and says that although they are old, there are still more adventures they need to experience. Quiz Ulysses is a king who feels that adventure is important to truly live a successful life A) When they talk about fight in Troy B) When he tries to go back on adventure C)When he starts talking about his son When Ulysses travels, his son takes over. He talks highly of his son but believes he can do better. He sees himself as a symbol for mankind and that others look up to him Ulysses Lord Alfred Tennyson struggled due to the effects of alcohol, depression, and disease on his family At the end of Tennyson’s poem, Ulysses contemplates on embarking on a previously mentioned journey instead of continuing to rule as King and continuing to stay home with his wife and son. "Ulisse" from Dante's Inferno, is an evil counselor who would rather adventure then be with his family and his duties in Ithaca. Describe the form.... Lord Alfred Tennyson Shift The poem is focused on how Ulysses wants to spend his life traveling instead of being home with his family. Sources The major shift is at... A) A good life with a wife and 6 kids B) struggled due to the effects of alcohol, depression, and disease on his family C) an okay life ... meh nothing to exciting Tiffany and Erin The shift happens in the middle paragraph when he starts talking about his son This is when the poem shifts from past to present This shifts the mood of the poem from reflecting on past adventures to yearning toward an adventurous future Rukahya, M.K. "A Literary Analysis of "Ulysses" by Alfred Tennyson." Bright Hub Education. N.p., 11 Sept. 2012. Web. 10 Apr. 2013. "One equal temper of heroic hearts, Made weak by time and fate, but strong in will To strive, to seek, to find, and not to yield." Ulysses, Lines 68-70 Within Ulysses, there are multiple references to the Trojan war, Odysseus, Shakespeare, and Dante. Due to the unknown length of an individuals lifetime, it is necessary to not waste a single moment on something you may regret Third stanza: "’Tis not too late to seek a newer world" "Push off, and sitting well in order smite the sounding furrows; for my purpose holds To sail beyond the sunset, and the baths Of all the western stars, until I die." -trying to convince his sailors to go on another adventure Paraphrase Meaning Lord Alfred Tennyson lived... Form Tennyson was very interested with the Odyssey, but where others focused on the battles and events, Tennyson was much more interested in the feelings of melancholy, adventure, and spirituality of Odysseus. In Ulysses, Tennyson focuses on the importance of adventure and shows Ulysses as wanting to gain all the knowledge that he can from the world. To Ulysses, was is another way to gain knowledge. Ulysses has seen it all as a sailor, a soldier, and a king. The poem is seen as a dramatic monologue. It is not necessarily clear to whom Ulysses is speaking to and from what location. The poem expresses Tennyson's personal need to go forward and brave the struggles of his own life. His dad was an alcoholic, one of his brothers was admitted to an insane asylum, and his closest friend, Arthur Hallam, died at age 22. 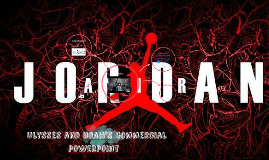 Transcript: Ulysses and noah's commercial powerpoint Buy theses shoes and they will make you fell like your michael Jordan Video Jordans are usually sold in foot locker the most common location is 4500 N Oracle Road, Suite 133, Tucson, AZ 85705. Jordans are sold for all sizes so everyone can wear them. Jordan Advertising Technique Of the Advertisement Were can these Jordans be located 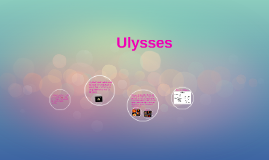 Transcript: Pictures sent back to Earth Ulysses' destination was the Sun. The trip took 5 years, but Ulysses was programmed to last for 13 years. Pictures sent back to Earth Ulysses was launched on October 6th, 1990 from Cape Canaveral Air Force Station, Florida. Ulysses explored the North and South pole of the Sun. This was the closest we'd ever been to the Sun. It was able to collect data on solar winds, interstellar dust, and the 3 dimensional character of solar radiation. Ulysses Ulysses The route of Ulysses 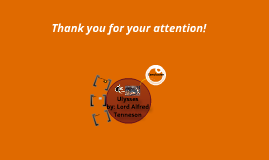 Transcript: It little profits that an idle king, By this still hearth, among these barren crags, Match’d with an aged wife, I mete and dole Unequal laws unto a savage race, That hoard, and sleep, and feed, and know not me. Alfred Lord Tenneson Alfred, Lord Tennyson was born on August 5, 1809 in Somersby, Lincolnshire. Alfred began to write poetry at an early age in the style of Lord Byron. After spending four unhappy years in school he was tutored at home. Tennyson then studied at Trinity College, Cambridge, where he joined the literary club 'The Apostles' and met Arthur Hallam, who became his closest friend. Tennyson published Poems, Chiefly Lyrical, in 1830, which included the popular "Mariana". It wasn't till 1842 that he published "In Memoriam" which were the Books, "The Lady of Shalott", "The Lotus-eaters", "Morte d'Arthur" ,and "Ulysses" in the two-volume Poems that established his reputation as a writer. Ulysses An oft-quoted poem, it is popularly used to illustrate the dramatic monologue form. Ulysses describes, to an unspecified audience, his discontent and restlessness upon returning to his kingdom, Ithaca, after his far-ranging travels. Facing old age, Ulysses yearns to explore again, despite his reunion with his wife Penelope and son Telemachus. For much of this poem's history, readers viewed Ulysses as resolute and heroic, admiring him for his determination "To strive, to seek, to find, and not to yield".[1] The view that Tennyson intended a heroic character is supported by his statements about the poem, and by the events in his life—the death of his closest friend—that prompted him to write it. In the twentieth century, some new interpretations of "Ulysses" highlighted potential ironies in the poem. They argued, for example, that Ulysses wishes to selfishly abandon his kingdom and family, and they questioned more positive assessments of Ulysses' character by demonstrating how he resembles flawed protagonists in earlier literature. Summary "Ulysses" details Ulysses' intense dissatisfaction and boredom on his island home of Ithaca. The poem is a monologue spoken by him, where he not only expresses his discontent, but also describes his desire to keep sailing. He's getting older and doesn't have a lot of time left, so he wants to get busy living rather than busy dying. The poem concludes with his resolution to "strive, to seek, to find, and not to yield." In conclusion i believe that the submission and devotion of Ulysses through this entire story. Tells me how he not only enjoys travelling but also gets adapted to various things he comes across. He’s just not eager to explore but also eager to learn more, to gain more ‘knowledge.’ It is only when he is travelling that the ‘margin’ of the globe that he has yet not tread shrinks and tends to provoke him to go further and discover all that lies from one end of the horizon to the other QUIZ http://www.proprofs.com/quiz-school/story.php?title=ulysses_6 Conclusion Ulysses by: Lord Alfred Tenneson Thank you for your attention! 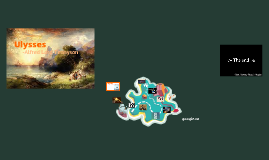 Transcript: -Alfred Lord Tennyson google.ca "From some three suns to store and hoard myself, and this gray spirit yearning in desire To follow knowledge like a sinking star, Beyond the utmost bound of human thought." Colton, Courtney, Kelsey, & Shaylyn "That hoard, and sleep, and feed, and know not me. I cannot rest from travel..." "We are now now that strength which in old days Moved earth and heaven, that which we are, we are- One equal temper of heroic hearts..." "tis not too late to seek a newer world..." Ulysses The Virtues of Perseverance and Optimism "Yet all experience is an arch wherethough, Gleams that untraveled whose margin fades For ever and for ever when I move." "There gloom the dark, broad seas. My mariners, Souls that have toiled, and wrought, and thought with me..." Précis