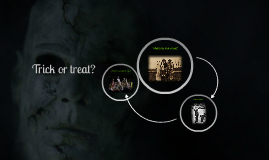 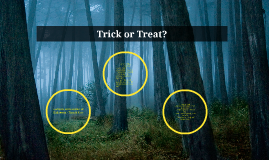 Transcript: Trick or Treat? Halloween Today ~ Little kids dressed up as their favorite kids ~Candy is a given as a form of treat ~ Even adults can participate in this event ~Takes place on the night of October 31st. HAPPY HALLOWEEN! Compare and Contrast of Halloween - Then & Now Ancient Origins All Souls Day ~Celtic tradition ~Celebrated on Nov 2nd ~Time to honor the dead ~ Receive pastries in exchange for prayers ("souling") ~ " A soul cake, a soul cake, have mercy on all Christian souls for a soul cake" 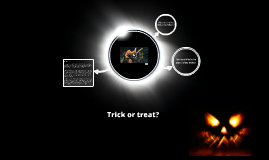 Transcript: Take a look at the text on page 15 of your textbook. Trick or treat? What do you think of when hearing the word "halloween" ? Samhain The origin of Halloween is a far cry from modern tradition's vampires, trick-or-treating and candy corn. Dating back about 2,000 years, Halloween was originally called Samhain, and marked the beginning of the Celtic New Year. Roughly translated from Irish Gaelic, Samhain means "summer's end". In ancient times, the holiday marked the transition from the "light" part of the year to the "dark" portion, as daylight hours became shorter and the weather grew colder. For this reason, the holiday is also known as "harvest's end" and "winter's beginning." The day was celebrated starting at sundown on October 31 and through the day on November 1. It was believed — and is still believed by Pagans and Wiccans — that Samhain is when the veil between this world and the spirit world is thinnest, and departed spirits can return to mingle with the living. Topic 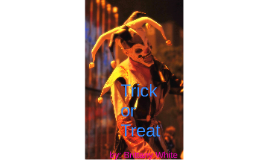 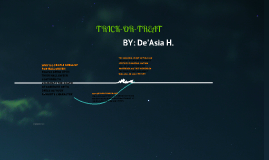 Transcript: TRICK-OR-TREAT Background photo by t.shigesa HOW DID HALLOWEEN BEGAN? ONE WAY HALLOWEEN GOT STARTED IS BY SOME HOUSEWIVES POOR PEOPLE WOULD COME UP TO THEIR HOUSES AND ASK FOR THINGS. WHY DO PEOPLE DRESS UP FOR HALLOWEEN THE ORIGINAL START OF TRICK OR TREATING BEGAN ON THE NINTH CENTURY EUROPEAN COSTOM CALLED SOULING NOW ON NOVEMBER 2nd THEY REMEMBER THE PEOPLE THAT DIED AND IT WAS CALLED SOULING DAY. PEOPLE DRESS UP IN THIER HALLOWEEN COSTUMES TO CELEBRATE THE DEATH OF SOMEONE OR TO DRESS AS YOUR FAVORITE CHARACTER BY: De'Asia H. 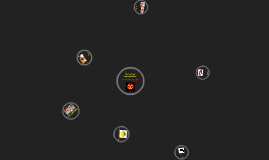 Transcript: Second... First... We sort and EAT our candy! We crash in our beds and fall asleep! Olivia Kayleigh Trick or Treat Aftermath Ideas By Sophia, Ashley, Olivia & Kayleigh We set up beds in the basement! Last... Sophia PLEASE?!?!?!?! Third... Ashley All to be done with Olivia! We put on PJ's and brush our teeth! 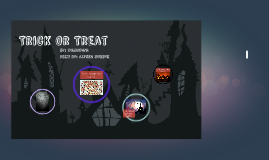 Transcript: knock, knock - trick or treat? Waking up in the garden path, by: UNKNOWN PREZI BY: ALYSSA SURDYK Trick Or Treat I spy a yummy sweet, Halloween is here again, 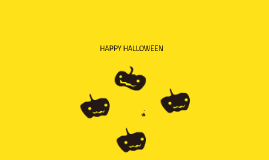 Transcript: Some people are watching you! MAKE SURE YOU !DO NOT! TRICK OR TREAT AT A GRAVE YARD! AND IF YOU DO, DONT GET EATEN BY A MONSTER! THEY ARE ALLWAYS DELICEUS. SOME THINGS YOU CAN MAKE ARE: PUMKIN PIE, PUMKIN SMOTHIE AND OTHER THINGS! SO DELICEUS! AHH! DONT CROSS ITS PATH WHITCHES ARE AN EVIL PESON THAT HAVE BROOMS AND WANDS THEY FLY THROUGH THE AIR ON HALLOWEEN! LOOK THERE IS ONE NOW! TRICK OR TREAT? AND SOME ARE WATCHING FROM A FAR! HAPPY HALLOWEEN AHH! PUMPKINS ARE THE SEASONAL FRUIT OF HALLOWEEN! IF YOU SEE A BLACK CAT, DONOT CROSS IT'S PATH!