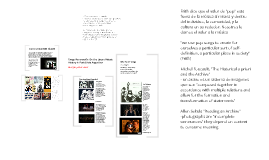 Transcript: “…how a new generation of Argentines will grapple with the past they have inherited as they attempt to move forward in a context that little resembles that of the golden age, transformed as it has been by a long series of economic and political ruptures” es tango? nuevo orquestas típicas - usa del lunfardo - hacen una conexión entre su música y una imagen muy especifica de Buenos Aires. “the group challenges the comfortable consumption of tango enabled by the passage of time and the aesthetic gloss of canonization. At the very least it complicates the post-Gardelian image of the tango singer as a principally romantic figure” Morgan James Luker “taken together, the musical and visual performance of Las Muñecas is at once thoroughly Gardelian and a complete inversion of the style and sensibility that Gardel has come to represent” “here Gardel and his legacy is drawn upon as a foil through which to articulate a tragicomic interpretation of the contemporary Argentine experience, the experience of looking back on the promise of a musical and historical “golden age” that Gardel has come to represent from a perspective that is all too aware of its ultimate failure” "the musical legacy of the golden age operates as a lens through which they can feelingfully explore and articulate a sense of contemporary Argentine identity" 1. Comentario sobre el pasado "it is a complex domain of music making in which the past is sonically brought to bear on the present, which, in turn, is heard as a commentary on the past” 2. Articulación de identidad Argentino “many contemporary musicians have self-consciously approached tango as a means of (re)exploring and (re) articulating a sense of Argentine identity” "New Sung Tango Ensembles" Tango Renovación: On the Uses of Music History in Post-Crisis Argentina " Gotan Project “not as inheritors of received tango history but as time traveling participants in tango’s formative moments” “aligned with the spirit of ‘real’ tango, that is, the genre that emerged of the local and the transnational in the heterogeneous milieu of turn-of-the-century Buenos Aires” Ellos aceptan influencias de afuera..mientras las orquestas típicas rechazarlas para ser más autentico, mas “Argentino” "tango did not emerge at this moment because it somehow reflected or expressed the sould of the people, but because it could gather, articulate, and symbolically resolve many of the contradictory tropes of modernity and modernixation experienced in Argentina, including matters of unity and diversity, modernity and tradition, and sameness and difference" "challenges the perhaps overly comfortable conventions regarding what can be accepted as tango" Frith dice que el valor de "pop" esta fuera de la música sí misma y dentro del individuo, la comunidad, y la cultura en su rededor. Nosotros le damos el valor a la música "we use pop songs to create for ourselves a particular sort of self-definition, a particular place in society" (Frith) Michel Foucault, "The Historical a priori and the Archive" - un arcivo es un sistema de imagenes que son "composed together in accordance with multiple relations and allow for the formation and transformation of statements" Allen Sekula "Reading an Archive" -photographs are "incomplete unnerances" they depend on context to consume meaning La Chicana Las Muñecas New Form Tango 34 Puñaladas “through such strikingly incongruent visual performances, the orquesta típica Fernandez Fierro and other groups like them have essentially reinvented golden-age tango and contemporary youth music, contemplating what might seem like their conservative musical strategy” "it is precisely this sonic similarity that constitutes the project of renovation for the new orquestas: by taking up the sound of historical orquestas largely intact, contemporary musicians juxtapose their style and sensibility with the highly incongruent musical, social, political, and economic experiences, conditions, and concerns of the present" 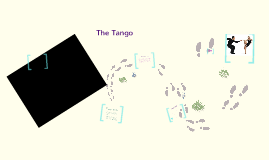 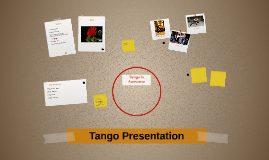 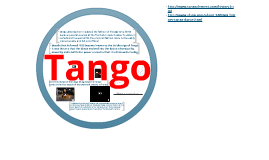 Transcript: tango dancing originated from Buenos Aires at the end of the Nineteenth Century tango was the first couple dance in Europe that was based on improvisation before the tango, couple dance was sequence based, with every couple on the floor dancing the same steps at the same time first piece of music written and published in Argentina to be labeled a “Tango” appeared in 1857 called "Toma maté, ché" tango was the third dance in history to be performed with the man and woman facing each other, the Viennese Waltz first, and the Polka second Tango earliest evidence of the tango being danced in Europe comes in the first decade of the twentieth century in France It is believed that the word Tango at that time probably referred to what is now known as Tango Andaluz or Andalucian Tango, a style of music from the area of Spain that is also home to the Flamenco, one of the most popular types of music in Buenos Aires in the middle of the Nineteenth Century decade that followed 1935 became known as the Golden Age of Tango it was this era that the dance evolved into the fusion of sensuality, sexuality and a battle for power or control that it is famous for today tango dancing even impacted the fashion of the age tulip skirts became popular-opened at the front and made it easier to dance in corsets and hooped skirts, the previous fashion, were not so easily maneuverable and fell out of favor http://www.tangoleva.com/dress.html http://www.tangoclement.com/history.html http://www.ehow.com/about_5382669_history-tango-dance.html