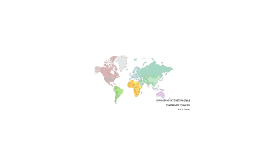 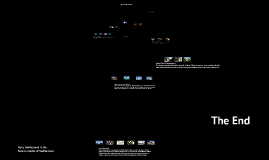 Transcript: Switzerland By- Anna DePasquale Foods of Switzerland Pastetli usually come in a round shape. There are different styles of fillings, it may include mushrooms and meat on a creamy sauce. They are usually served with rice and peas. "Apfelküchlein" (deep fried apple cookie) taste great either warm or cold, with or without vanilla sauce. Teigwaren (Pasta), Vegetarian menu: "Pasta tri colori" (three colors) in the colors of red, white and green with vegetables. Climate in Switzerland In spring (March to May) the trees bloom and the meadows turn green. In summer the temperature rises to 25-30 degrees (77-86 degrees Fahrenheit). In autumn (September to November) the fruits become ripe, then the leaves turn brown and fall. In winter the snow changes the landscape. Double rainbow at Lucerne Avalanche below Allalinhorn (Mischabel), Saas Fee, Valais, Switzerland. Though villages, roads, railways and official ski runs are well protected against the dangers of avalanches, careless skiers take high hazards when leaving official ski runs Destinations in Switzerland Chillon Castle - Water Castle on Lake Geneva Chillon Castle is on a rock on the banks of Lake Geneva. The water castle is the most visited historic building in Switzerland. For about four centuries Chillon was the home and profitable toll station of the Counts of Savoy. Salt Mines – History of White Gold For centuries the ownership of salt mines meant wealth and power. The salt deposits at Bex, discovered in the 15th century, are still mined today. The salt mines are accessible to visitors, a museum designs the mining of salt from 1684 to today. Mogno - Mario Botta's Mountain Church Seen from outside, the building is elliptical in shape, with a slanting roof and black and white stripes. The inside has a dizzying checkerboard design in the same colors. This is the church that was designed by Mario Botta. Emmental AOC Show Dairy This exhibition dairy covering 17,500 m2 gives you an up-close look at how the famous Emmental AOC is manufactured. Lake Toma - Source of the Rhine A calm lake lies near the Oberalp Pass. This lake's water flows into the valley. The Tomasee (Lake Toma) is known to be the source of the Rhine. And it is only here that the river that flows through four countries can still be crossed with a single step. Brissago Island, Lago Maggiore The mild climate at Lago Maggiore is unique in Switzerland, and is why subtropical plants flourish at Isola Grande. The Botanical Gardens of the Canton of Ticino house around 1,700 plant species. Säntis - View Across Six Countries To see Switzerland, Germany, Austria, Liechtenstein, France and Italy all at the same time - this can be done from the 2,502-meter-high Säntis. The highest mountain of the Alpstein region is the starting point and destination for mountain tours, hikes and ski trips. Abbey Church Romainmôtier The charming medieval hamlet is located in Nozon Valley, a region offering countless bucolic walks that lead hikers towards the thousand-year-old abbey church right on the countryside. Bern, Switzerland is the federal capital of Switzerland. Bern, Switzerland- Not many cities have managed to keep their historic features as well as Bern, the "federal capital" of Switzerland. The old town of Bern has been entered in the list of UNESCO Cultural World Heritage Sites and thanks to its 6 kilometres of arcades - the locals refer to them as 'Lauben' - boasts on of the longest weather-sheltered shopping paved roads in Europe. The End 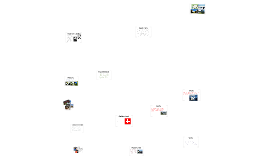 Transcript: FACTS FACTS Some famous people from Switzerland are Roger Federer a world champion tennis player born August 8, 1981 in Basely and Claud Nicollier, the first and only swiss astronaut born september 2, 1944 The Swiss Alps , there are many historical places such as glaciers ,Old trading paths . Geneva is another historical place where a lot of meetings took place. Places To visit Famous People One Native animal in Switzerland is the Chamois. It is very similar to a goat. It has horns on it's head which curve into a hook at the end and it is a popular game. Another native animal from Switzerland is the Ibex which is also similar to a goat. The curved horns on the Ibex have ridges, and bu counting these ridges you can determine the age of the animal. Important Leaders The countries that border Switzerland are France, Germany, Austria, and Italy. Its major cities are Zurich, the largest city located in Switzerland, and Geneva, the second most populous city in Romandy, the french-speaking part of Switzerland Important Dates The capital of Switzerland is Bern City which is 375km long. Some of its rivers are the Rhine river and the Aar river which is the longest river in Switzerland. Plant Life Switzerland By: Pedro C. Ketlyne J. Xadria S. FACTS Its tallest mountain in Switzerland is called Monte Rosa. It is 4634 meters tall in the Pennine Alps. Animal Life in Switzerland One of the best known European mountain flowers is the Edelweiss. It is the national flower of Switzerland. Another plant is the Enzian. 1291 is the official date of birth of the Old Confederation. 1499 is when Switzerland won independence from the Holy Roman Empire. 1971 is the year when Swiss women received the right to voe in national elections. 2002 is the year when Switzerland was declared a full member of the United Nations. Ibex Rudolf Brun was the leader of the Zurich Guilds' revolution of 1336 and the city's first independent mayor. Alfred Escher was also a Swiss politician. He was a railway entrepreneur and a member of the Swiss National Council from 1848 until his death. Region Facts Chamois The population in Switzerland is 7,639,961. Its form of government is a Federal Republic. The economy is divided into three main sections, agriculture, industry, and services which 50% of the population is employed in it and includes jobs such as banking, assurances, tourism, etc. The climate varies throughout the country. Precipitation is higher in the west where clouds form from the Atlantic ocean. The average amount of sunshine per year is about 1700 hours. 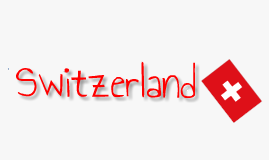 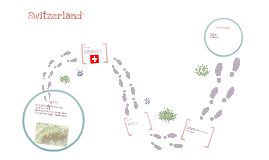 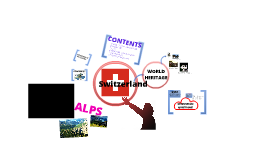 Transcript: Switzerland 1 DESCRIPTION OF THE COUNTRY 2 GEOGRAPHY 3 ALPS 4 WORLD HERITAGE by UNESCO 5 VOCABULARIES 6 DISCUSSION QUESTIONS DESCRIPTION OF THE COUNTRY GEOGRAPHY ALPS WORLD HERITAGE Convent of St Gall Benedictine Convent of St John at Müstair Old City of Berne Three Castles, Defensive Wall and Ramparts of the Market-Town of Bellinzona DISCUSSION QUESTIONS 2 Which of the World Heritages in Switzerland do you prefer? A convent is a building in which a community of nuns live. to be formed from the things or people mentioned 1.THE MEANING OF THE SWISS FLAG 2.SWISS IS DIVIDED BY A MOUNTAIN. WHAT IS THE NAME OF IT? 3.IS THE POPULATION DENSITY OF SWISS BIGGER THAN THAT OF KOREA? 4.HOW MUCH PORTION DOES ALPS COVER SWISS? 5.WHICH WORLD HERITAGE IN SWISS HAS THE RICHEST AND OLDEST LIBRARY? A country's heritage is all the qualities, traditions, or features of life there that have continued over many years and have been passed on from one generation to another. POPULATION DENSITY VOCABULARIES an organization or group consisting of smaller groups or states, especially one that exists for business or political purposes. CONFEDERATION CONVENT CONSIST OF the extent to which something is filled or covered with people. QUIZ HERITAGE 1 What would it be like living in a low population density like Switzerland? CONTENTS