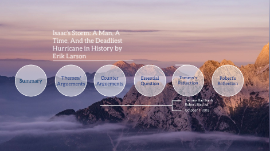 Transcript: October 1, 2018 Isaac's Storm: A Man, A Time, And the Deadliest Hurricane in History by Erik Larson Tommy Bartley & Robert Bischof Summary Summary The book Isaac's Storm covers the events of the Galveston Hurricane, also known in the region as the Great Storm of 1900. To this day, the storm remains the deadliest natural disaster in U.S. history, totaling about 8,000 fatalities. The book begins on a September night in the year 1900, prior to the hurricane achieving landfall. The narrartor introduces Isaac Cline, a meterologist working for the U.S. Weather Bureau who lives in Galveston, Texas. Isaac possessed a deep understanding of storms and their tendencies, but he also had a huge ego and was overconfident. Isaac felt that he was a top tier meteorologist in the region, but he lived during a time in which much about nature and weather was unknown. Many, if not all meteorologists of the time were actually clueless as to how and why a hurricane forms. There was speculation of a hurricane coming towards Galveston, but Cline felt that it was an impossibility. He even published an article stating so. The U.S. Weather Bureau was tracking the storm but had little concern of it hitting Galveston. However, Cuban meteorologists knew that the storm was coming. The U.S. Weather Bureau had no way of getting Cuba's data though because they had banned communications with them. Despite the experience and accuracy of Cuban meteorologists, the Weather Bureau felt that the Cubans would sabotage them. While the hurricane was what literally caused mass destruction and the loss of lives, it was the pride and arrogance of the American Meteorologists that allowed for it to occur. The story mainly focuses on Isaac by explaining his actions before, during, and after the hurricane, but it also includes accounts of the disaster from other people of Galveston. This allows for the destruction and impact that the hurricane had on the area to be told entirely. Important Themes/Arguements Themes/Arguements -Dangers of Blind Patriotism: There are many instances in the book where there are consequnces due to American pride and patriotism. For example, the people of Galvelston are unprepared to face the storm due to the American's unwillingness to work with the Cuban weather services. Unlike the weather itself, America is in control of whether or not they cooperate with the Cubans. -Consequences of Having a Large Ego: Isaac Cline has a very large ego and hubris. In the days and hours leading up to the storm's arrival, he misinterprets and misses clear signs, yet he is still confident in his desicion. Because of this, he grossly underestimates the storm and thus puts thousands of lives at risk. Although he could have recognized the true danger of the impending hurricane, there was no way Isaac Cline could have stopped it, or lessened its intensity. Also, even if he had been able to warn the city of Galveston, he would not have saved everybody in the storm's path. Not only that, but making accurate weather predictions with the weather technology available in the year 1900 is incredibly difficult to say the least. Becuase of all these factors, Isaac Cline is not entirely responsible for the events of the book, and he doesn't deserve a lot of the harsh critiscim he recieves from readers. Counter Arguments Counter Arguements Relating to the essential for the first quarter, "What does it mean to be stewards of the earth, and how are we affected by the environment?" Isaac's Storm has some valueable insights. While the story doesn't directly explain anywhere what it means to be a steward of the earth, it does provide an example of how we are affected by the environment. The story shows how the environment is far more powerful than humanity, and is capable of destroying us and everything that we create. The main reason that all of this occurs, is because of the meteorologists. The meteorologists of the U.S. Weather Bureau failed to respect nature and the signs that it showed of a hurricane, and many people died as a result of it. In this instance, people were harmed by the environment due to the lack of respect towards it. Interpret this however you may like, but to me this could mean that in order to be a steward of the earth, one must respect nature. Essential Question Essential Question The book Isaac's Storm has taught me many things regarding hurricances, and also about what American society was like in the beginning of the twentieth century. By learning about the knowledge on hurricanes in 1900, I have come to gain a very basic understanding on the way science has evolved in this area. In 1900, it was unknown how hurricanes started. Some meteorologists even believed that something as insignificant as a butterfly flapping its wings could start a chain reaction that would lead to the formation of a hurricane. Today, meteorologists are able to pick up the formation of a hurricane weeks before its arrival to land due to having much better instruments 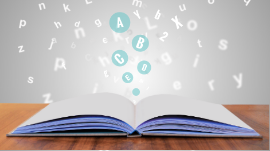 Transcript: 1 m 2 p b Y g X F By: Jamie Wright Author Presentation E Full name: Hans Theodor Woldsen Storm Born on September 14, 1817 in Husum, Schleswig (Germany) Died on July 4, 1888 in Hademarschen (Germany) Known as a poet and novelist His Novellas were among some of the finest in German literature An outstanding figure of the German poetic Realism Era Theodor Woldsen Storm - Biographical Information D C A Perfect Template for Various Topics: A Perfect Template for Various Topics: B "There is no friend as loyal as a book." - Ernest Hemingway "So many books, so little time." - Frank Zappa "Don't read books. Make prezis!" - Author A Thank you!