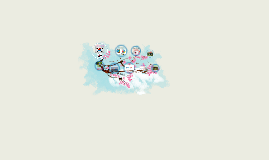 Transcript: Interesting facts Symbols of south Korea Hope you like it created by Harleen and Mayuri Triple E South Korean flag If you write in red ink you can die or your already dead. South Koreans trade Graph of imports and exports magpie The national bird national animal tiger 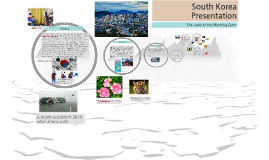 Transcript: A Cat and a Butterfly Geography Geography (Continued) South Korea is a country in the continent of Asia, on the 38th parallel of the Korean peninsula. It resides in Eastern Asia. The eastern half of South Korea is mountainous, while the west and south side are dotted with harbors and nearby small islands. The geographic coordinates are 37, 00 N and 127, 30 E. It has a total land area of 98, 190 sq km, and the water landforms in South Korea have a total area of 290 sq km. It borders North Korea, the Japanese Sea, and the Yellow Sea. The lowest point of elevation is at 0 meters, at the Sea of Japan, and the highest point of elevation is at 1,950 meters, at Hallasan, a mountain. A recent accident in 2014, when a ferry sunk. The flag of South Korea. The mugunghwa, South Korea's natural flower. South Korea Presentation South Korea is one of the most homogenous countries in the world, having it's own separate culture, language, dress, and cuisine unique to and distinctly different from neighboring countries. When meeting, it is traditional that both bow, and when departing, the younger of the people must wave. When addressing someone, it is impolite to call them by their given name, calling them a professional title (Mr., Mrs.), and you may only call them by their given name with permission. Names are also reversed, so the family name is shown first in writing, and the given name is last. It is also considered rude to make physical contact with someone who is not a close friend or relative. Direct eye contact between businesspeople of different ranks is avoided and is considered uncouth. Bibimbap The Tiger is South Korea's national animal. The climate in Korea is cooler than most countries on the 38th parallel. One of the best times to visit South Korea is Autumn, when the skies are clear. During Spring and Summer, it rains quiet alot and during the Winter, it is covered in snow. Seoul, the capital of South Korea gets -5 degrees Celsius to -2.5 degrees Celsius (23-27.5 degrees Fahrenheit.) South Korea usually gets over 100 centimeters of rainfall every year, rarely getting less than 75 centimeters. Summers are short, dry, and warm, while Winters are usually dry, humid, and short. Summer and Springs are nice, but short. Most schools in South Korea's require students to wear uniforms called gyoboks. School starts at 8:30 A.M. and ends around 4:00 P.M., while cram schools (private acadamies) start from 6:00-7:00 A.M. until 10:00-11:00 P.M. To add to that, the first and third Saturday of every month, there are classes/club activities until noon, in most schools. While in elementary school or later, children must take public transportation. The dress codes are strict, meaning there are uniforms you are required to remove makeup and jewelry, and there is a limit to hair length and color. Also, South Korea is more focused on studies, so there are no sports until college, but P.E. still exists there. Even so, sports are played outside because there are no auditoriums, just like there are no lockers. In the cafeteria, the lunch is almost always the same. There are only a few vacation days, and there are no school events (prom, homecoming, et cetera.) Economy/Industry Samgyupsal Ramen "Hello, good morning!" is "Annyeonghaseyo." "You're welcome" is "Dangsin-ui hwan-yeong." "Thank you" is "Gamsahabnida." "Goodbye" is "Annyeonghi gaseyo." "What's your name? is Dangsin-ui ileum eun mueos-ibnikka?" "The end." is "kkeut." Culture (Etc.) The biggest sold manufactured products in South Korea are cars, ships, and LG/Samsung mobile phones. Related to this, South Korea's major industries include Samsung, LG, and Hyundai. Some of the major imports in South Korea are machinery, electronics/equipment, organic chemicals, and plastics while their major exports include wireless communication equipment, semiconductors, motor vehicles, computers, steel, ships, and petrochemicals. The main jobs foreigners can get in South Korea is teaching (usually languages). The currency in South Korea is "won". If converted, 1 dollar (United States currency) can equal 1,030 won. Galbi Common Phrases South Korea is a religiously open country, but the most practiced religions there include Christianity, Shamanism, Buddhism, and Korean Confucianism. South Korea's most popular foods include galbi, bulgogi, bibimbap, ramen, and samgyupsal (pork). The main language in South Korea is Korean. While in South Korea, you can take part in several recreational activities including martial arts (like judo, taekwondo, karate, jujitsu, etc.), golf, sailing, and other watersports. Some popular art pieces in South Korea are "A Cat and a Butterfly", "A Dream of Amusement in the Garden of Peach Blossoms", and "A View of Geumgang." Important holidays in South Korea are the Lunar New Year and Korean Independence Day. During these type of days, they wore hanboks, a special festival suit/dress. The Land of the Morning Calm A (blurred) map of South Korea. A meeting between South 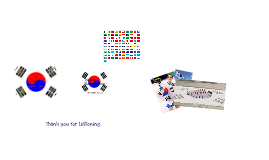 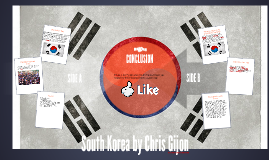 Transcript: Culture Thank You Education in South Korea The flag of South Korea, also known as the Taegukgi (also spelled as Taegeukgi, literally "Taeguk flag"), has three parts: a white rectangular background, a red and blue Taeguk in the center that symbolizes a balance, and four black trigrams, which are selected from the original eight, on each corner of the flag. South Korea is a country in eastern Asia. South Korea's flag pictures a red and blue Yin-Yang symbol, red (yang) on top, blue (yin) on the bottom, in the center of a white field. Four groups of three long and short black bars (called kwae) surround the central circle. SIDE B South Korea by Chris Gijon Thats it for my prezi on South Korea I hope you enjoy like this this prezi have a good day. Higher education is an overwhelmingly serious matter in South Korea, where it is viewed as one of the fundamental values of South Korean life. There, academic success is often a source of pride for families and within South Korean society at large. South Koreans view education as the main propeller of social mobility for themselves and their family as a gateway to the South Korean middle class. Graduating from a top university is the ultimate marker of high status, future socioeconomic status, marriage prospects, and prestige and respectable employment prospects. Pressure to succeed academically is deeply ingrained in South Korean children from an early age. South Korea flag What the signs on the South Korea flag mean CONCLUSION South Korea best food Chili Pickled Cabbage (Kimchi 김치) Samgyeopsal (삼겹살)Pork Bulgogi (Daeji Bulgogi 불고기)Korean Barbecue (Gogigui 고기구이)Hangover Stew (Haejangguk Mixed Seafood StewSoft Tofu StewKimchi Stew Fish Stew SIDE A NAME: South Korea LOCATION: Asia GOVERNMENT: Republic OFFICIAL LANGUAGE: Korean is the official language and spoken throughout the country. MAJOR RELIGION(S): No affiliation 46.5%,Christian 26%, Buddhist 26%, Confucianism 1%, other 1%. The population of South Korean is 50.22 million because its a big place and lots of people live there thats why its so popular. Population of South Korea 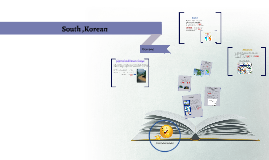 Transcript: By: yer yang The definition for location is where the place is. Relative and absolute location is a way to describe location. The location of South Korea is 37 00 degree north, and 127 30 degree east. southern, korea is located eastern asia. place Relative and Absolute location South,korea Busan A physical change is a place make up its natural environment. A human change is a place come from human ideas and actions The definition for place is what it like there? and it is an area. For place there are two things that describe place.It is physical and human characteristics. South, korea is half of the korean peinsula bordering the yellow sea and the sea of japan. Example of southern korean Human-Environment Interaction An example for physical change is land forms, bodies of water, climate, soils, natural vegetation, and animal life. The definition for movement is how things move and idea go around. The movement for south korea is airplane, holiports, railways, subway, and roadway. Movement physical and human change Relative location is some place describing where the location at. Ex: Walmart is located next to sear. Absolute location is is a landmark telling where the place is. Ex: Grid coordinate or degree. Longitude and latitude can be an example. South ,Korean longitude and latitude Relative location The definition for region is area with common characteristic. The region for southern, korea is they have cold winter, the rainfall in souh korea is heavier in summer than winter, and south, korea has temperate climate. Region The definition for human environment interaction is the weather and the issue. The issue in south, korea is there are air pollution in large cities because they waste lot of food ,they have acid rain, and there water pollution from the discharge of sewage and industrial effluents. THANK YOU GUY AND GIRL A map of where subway go An example for a human change is house, cars, street, and other more picture of the region in south,korea Location South, korea seoul 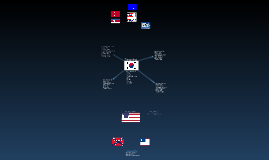 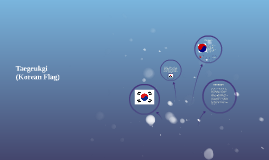 Transcript: lower half circle, blue, means yin The upper half circle, red, of Taeguk means yang The flag was designed by King Gojong or Pak Yeong-hyo in 1882 by the deletion of four of these trigrams, and Taegeukgi was adopted as the national flag of Joseon Dynasty on March 6, 1883. After independence, both North and South Korea adopted versions of the Taegeukgi, but North Korea changed its national flag to a more Soviet-inspired design after three years. Taegeukgi (Korean Flag) Ying and Yang are used to decribe oppisites. Like, light/dark, good/bad, hight/low, hot/cold, fire/ice, evil/saint, and etc. White field with a red and blue taegeuk (wing-wang) in the center and four black trigrams, one in each corner of the flag YING YING-YANG HISTORY Geon -Heaven Ri- Fire Gam- Water Gon- Earth Yin means dark and cold, while Yang means bright and hot. The idea of Yin-Yang is supposed to have originated from the old Korean philosophy of Sam shin meaning three gods. YANG