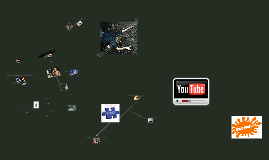 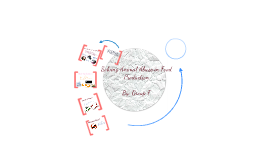 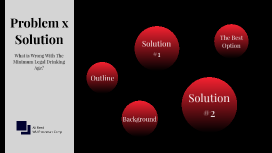 Transcript: Problem x Solution What is Wrong With The Minimum Legal Drinking Age? Ali Reed WU Freshman Comp WITHIN THIS PRESENTATION 1. Describe the current Minimum Legal Drinking Age and the problems that arise Outline 2. Provide multiple solutions to this problem 3. Examine which solution is the most viable WHAT IS THE CURRENT MLDA Background In the United States the Minimum Legal Drinking Age is 21, unlike most first world countries with an 18 year old MLDA. Before the 1980's, the MLDA was 18. However, this law quickly changed to 21 in order for states to keep federal highway funding under the Reagan Administation. The Problem Why is the current MLDA a problem? With the minimum legal drinking age being 21, not only are "coming of age" laws throughout the United States inconsistent but young adults are less safe when it comes to alcohol consumption. In the US, 18 is considered the age of legality, or adulthood. At this age, citizens are allowed to vote, fight in the military, get married, adopt a child, write their wills, and play in the lottery. One of the main arguments behind a 21 year old legal drinking age is the concept of responsibility. However, why is an 18 year old responsible enough to care for a child but not drink a beer? This inconsistency makes young adulthood increasingly confusing and ultimately promotes sneaky behavior such as pre-gaming and binge-drinking. Continued The Problem Behind the MLDA, cont. Recent studies have shown that while alcohol-related vehicle fatalities have decreased over the last 20 years, no such change has been displayed within college aged students. Am J Public Health states that "college students are more likely to engage in heavy drinking than their peers who do not attend college, with 2 in 5 students nationally engaging in binge drinking on at least 1 occasion in the past 2 weeks.” To continue, with binge-drinking and pre-gaming on the rise, cases of sexual assault and opioid addiction have spiked as well. Another study shows that “between 1993 and 2005, the proportion of college students abusing opioids like Vicodin and OxyContin jumped 343 percent and 450 percent for tranquilizers like Xanax and Valium,” (Mary Kate Cary). Overall, the minimum legal drinking age may have been viable in early decades, but due to a growing party culture the age limit is more dangerous to young adults who will turn to drinking in unsupervised areas and finding more harmful substitutes. Solution #1 Solution #1 Change the Minimum Legal Drinking Age to 18 Objectives behind this Solution 1. Promote consistency within "coming of age" laws throughout the United States Why? 2. Encourage alcohol consumption in regulated/supervised environments 3. Strengthen the US economy by increasing the target audience of alcohol sales and production Solution #2 Solution #2 Introduce educational programs in schools about the dangers behind alcohol consumption during young adulthood Objectives Behind this Solution Why? 1. Deter youth from binge drinking practices 2. Provide an environment for questions and information behind alcohol related injuries 3. Ensure young adults have an understanding behind the responsibilities of alcohol consumption What Solution Has a Greater Impact? Changing the Minimum Legal Drinking Age back to 18 will, overall, have the greatest impact on the economy, decreasing opioid abuse, ensuring supervised environments for young adults, and creating consistency within United States age laws. The Best Option Examination Examine While implementing educational programs in schools seems rational, that solution would not gain nearly as much traction as changing the Minimum Legal Drinking Age. Aside from the fact that the government cannot force private institutions to teach alcohol safety to students, programs such as D.A.R.E have rarely been seen hindering alcohol consumption by minors. It's Time to Change the MLDA to 18! So What? Lowering the minimum legal drinking age to eighteen is the safest way to keep young adults from popular binge-drinking practices such as: over-consumption, opioid abuse, sexual assault, and much more. The United States is behind most first-world countries when it comes to authorizing the initiative for legal drinking at the start of adulthood. In order to subdue alcohol related threats, strengthen the economy, and provide for a smoother transition into adulthood, the federal government must decrease the minimum legal drinking age to eighteen. Crowley, Aly G. “18 OR 21: THE ECONOMIC IMPLICATIONS OF THE MINIMUM LEGAL DRINKING AGE IN THE UNITED STATES.” Pennsylvania State University, 2011. Cary, Mary Kate. “Time to Lower the Drinking Age.” U.S. News Digital Weekly, vol. 6, no. 18, May 2014, p. 15. EBSCOhost, search.ebscohost.com/login.aspx?direct=true&db=aph&AN=95880916&site=ehost-live. Herszage, Shayna. “The Case for Lowering the Drinking Age to 18.” The YU Observer, 6 Feb. 2020, yuobserver.org/2020/02/the-case-for-lowering-the-drinking-age-to-18/. Toomey, Traci L., et al. 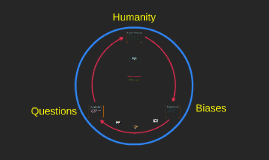 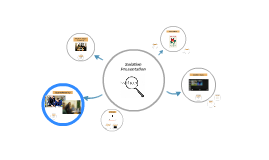