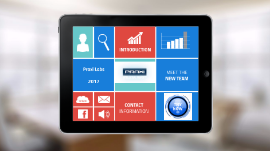 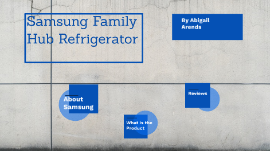 Transcript: By Abigail Arends Samsung Family Hub Refrigerator Who we are About Samsung Samsung is a multinational conglomerate company that specialists in technology History History Click to edit text Basic Facts Basic Facts Founded By Lee Byung-chul Founded on March 1, 1938 Random Facts Other Headquarters in Seoul South Korea Some products are Samsung Galaxy S8 and Samsung Galaxy S9 Our values Our values Comply with laws and ethical standards. Maintain a clean organizational culture. Respect customers, shareholders and employees. Care for the environment, health and safety. A socially responsible corporate citizen. Main Purposes What is the Product The Family Hub refrigerator main features are Store food obviously Create shopping lists Integrate family members’ schedules Stream your favorite music Commercial Cool Select Pantry Choose the optimal temperature, while separately storing fruit and cheese trays. Adjustable shelves Adjustable shelves go from standard to slide-in or flip-up to store bottles and other tall items with ease. Twin Cooling Plus Dual cooling prevents spoiling and freezer burn for fresher, better-tasting food. What does it have? What it has Reviews Reviews Statistics Statistics Currently On the Samsung website there are 60 five star reviews (49%) 24 four star reviews (19%) 19 three star reviews (15%) 14 two star reviews (11%) 5 one star reviews (0.04%) The Family Hub refrigerator will make your life a lot easier and will have fun bonus features because your fridge probably does not do what this fridge does Conclusion Conclusion 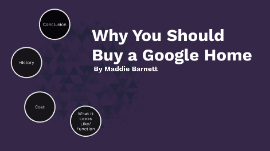 Transcript: Why You Should Buy a Google Home By Maddie Barnett You can use it to stream your favorite music Check the weather Control lights or thermostats Set timers All with simple voice commands! Function What it Looks Like/Function What it looks like Description The Google Home has a sleek design and a range of colors such as black, rose gold, and silver Can come in metal and fabric Picture Picture Google Home is better at understanding your voice Google Home has an easier setup Google Home can answer questions access your Gmail and Google Calendar Differences Between Alexa and Google Google Home Vs. Amazon Alexa The Google home mini costs $49 The Google home max costs $399 The basic Google home costs $129 Cost Cost Google Mini is a cheaper basic version and is a small circle Google Max is the most expensive, but has a louder sound and looks like a speaker The basic Google Home is a cylinder shape and is in the middle for price Differences Differences Between the Models Founded by Larry Page and Sergey Brin in 1998 Started off in a garage and is now a very large company Most commonly known as the search engine and Google Chrome Google History History Google Homes come in many shapes and sizes Can answer any question Control anything with just your voice Listen to a wide range of music Not outrageously expensive Conclusion Conclusion 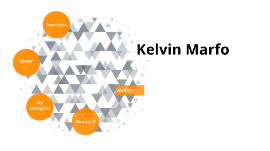 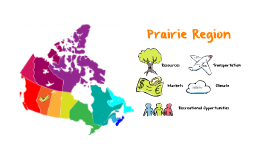 Transcript: Other recreational activities and places in the region includes: Winter Festival, Ice fishing, Pow Wow, Canoeing, Hiking, Musuems, and National Parks. When travelling by sea, sea carries charger per container rates shipping. They charge tends to be based more on the size of a shipment. However, sea carries could turn out to be more expensive. For speed, many sea shipments can take around a month to arrive but ships are getting faster. They have created shorter shipping routes. Ocean lines tends to have a weekly schedules so missing a weekly cut-off means a longer delay. For environmental impact, considering oil spills, and the water ecosystems affected by ship can cause a huge problem. Saskatchewan: On January 1, 2016, Saskatchewan's population reached 1,142,750, up to 13,509 from January, 2015. Prairie Region When transporting by train, trains are capable of transporting a large amount of containers that come from shipping ports. Trains can arrive at their destination pretty fast but the main disadvantage of rail is its lack of flexibility. Trains have a certain time schedule. It is hard to go around it. However, the government are currently trying to encourage shippers to use train more often because of its environmental benefits. Rail transportation is more economic and energy efficient. The northern region of the Prairies is a boreal forest which is mostly to cold for agriculture. It is more for the resources like mining. When carrying a cargo by road, companies strives for the best routes and prices to ship out their products. It may cost more because of rate, time, gas, weight, and size. For speed, driving does take a long time to arrive so this is more recommended if you are shipping within the region. Ground shipment is reliable however, due to weather it does cause delay but not much, maybe a day or two. For environmental impact, road shipment causes many issues. when travelling by air, airlines charge a company by what is called a chargable weight. Chargable weight is calculated from a combination of weight and size. When it comes to speed, there is no question that air usually much faster but its the most unreliable. For environmental impact CO2 emissions are much higher in airlines causes carbon fingerprints. The Prairie also consist of agriculture. - wheat, barley, canola, brassica, and oats. The Natural resources: - Oil, gas, potash, salt, uranium, and diamond. Manitoba: On January 1, 2016, Manitoba's population reached 1,308,800. Climate The Canadian prairie generally experience dry semi-arid climates. Population: When deciding how you are going to bring supplies from another country to the Prairies, you have 4 choices of transportation. Mixed Grass Prairie - The dry interior plains. Alberta: On January 1, 2016, Alberta's population reached 4.23 million, up 72,400 from January 1, 2015. Fescue Prairie - The moisture region. Resources There are 726, 420 immigrants here in the Prairie region. Mostly in Alberta and Manitoba and a decent amount in Saskatchewan. (Based on a 2006 resource) The Prairies have more younger population compared to the rest of Canada, with more children up to 14 years old than adults 65 or older. Tallgrass Praire - More of the flatland and cropland. - Really good for resources. The Prairies is quiet diverse due to different parts in the area. There are 3 main types of grassland in the Praires. The southeastern prairies are semi arid and highly prone to frequent and severe drought. The zones around major cities are very dry. The eastern section of the prairies is well watered with several large lakes and rivers. The area also gets reasonable amounts of precipitation. The middle sections of the prairies have better farmland, despite having shorter frost-free season. The northern region is a boreal forest. Recreational Opportunities Markets Transportation Immigrants: 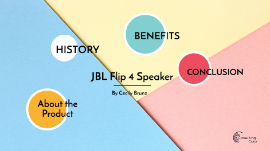 Transcript: JBL Flip 4 Speaker By Cecily Brunz About the Product Bluetooth Portable Speakers The JBL Flip 4 is one of the more new versions of the JBL speakers, that comes in many different shapes, sizes, colors, and patterns. There are many more pros to this product than cons, and you will learn about the history of these speakers, the benefits and much more. HISTORY History The JBL Flip 4 has much improved from the previous models of this product There have been four JBL speaker models including the Flip 4 In 1946 JBL produced their first product Ken Decker Ken Decker started a company in 1927 in La manufacturing speaker drivers for radio sets In 1939 Decker was killed in an airplane crash leading the company to have financial issues James Lancing then took over the company after Decker died In 1945 Lancing left the company to form his own company known today as the JBL Speaker Company BENEFITS Water Proof Benefits Portable Good Price Durable Light weight (1 pound) Long lasting battery (12+ hours) Can be stood up vertically or laid down horizontally PICTURES COLORS AND DESIGNS The JBL speaker has many designs and colors that you can choose from such as camoflauge, stripes, and colors such as white, red, green and more CONCLUSION The JBL Flip 4 speaker is waterproof, durable, has good sound quality, can take calls and much more. You can take this speaker with you to the lake, on your boat, or to your friends house Overall this is the best speaker that has many more pros compared to cons and will benefit you the most PRICES The JBL Flip 4 speaker is $95.99, if you order from the offical JBL website No additional cost for any colors or designs Prices vary if you order from Amazon, or any other site PRICES 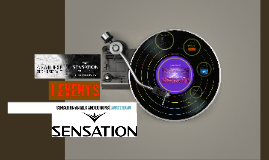 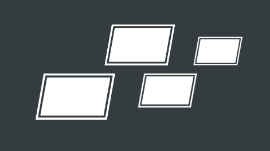