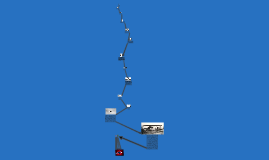 Transcript: pd2 After ten years and thousands of shows, the novelty of balloon ascents began to fade and Baldwin found himself searching for a daring new exhibition specialty. The brothers rediscovered the rigid parachute, invented a century before, and redesigned it to be lighter, flexible and more compact. The Baldwins tested their first parachutes with weighted sand bags from cliffs nearby. The daring “Captain Tom” would be the one to attempt the first live jump. After this feat, Baldwin was ready to take his new act on the road. Consequently, he personally inspected every lighter-than-air craft built for and used by the Army during the war. He was promoted to the rank of Major during the war. After the war he joined the Goodyear Tire and Rubber Company in Akron, Ohio, as a designer and manufacturer of airships. Known as a showman and aviation daredevil, Baldwin accepted an invitation to demonstrate his “Red Devil” airplane in St. Louis in 1910. Amateur flyer Clifford Harmon had also been invited to fly but backed out at the last minute. “Never mind,” Capt. Baldwin said. “If Harmon doesn’t fly, I will.” He began in a field between Calvary Cemetery and the Mississippi River. He flew down the river to Carondelet, and over the Eads Bridge where thousands stood cheering him. Surprising his audience, Baldwin returned by air, flying under the Eads Bridge at 50 mph and under the McKinley Bridge, a feat of pure daring. In 1910 Baldwin built his own airplane, the first to feature a all-steel framework rather than wood, and called it the "Red Devil." It was powered by a 60 horsepower Hall-Scott engine. He formed a troupe of aerial performers and toured several countries in the Far East, making the first airplane flights in many nations. In 1914 he returned temporarily to dirigible design and development, creating the US Navy's first successful dirigible, the DN-I. After acquiring his own hot-air balloon, Baldwin quit the circus and began a free-lance tour of the county fair circuit with his brother. Baldwin coined the name “Captain Tom”, not only to satisfy his ego, but also for name recognition, and continued to enhance his theatrics. When he made his first balloon ascent in 1875, Baldwin quickly became the star attraction at county fairs all over the country and in Canada and the Far East. Baldwin made nearly 3,000 ascents from a balloon and had several close calls, but his seemingly proverbial luck and great skill always saved him from disaster in even the most dangerous situations. Thomas Scott Baldwin (1854-1923) BenBrewer The Army Signal Corps became interested in the airship idea and offered to pay him $10,000 for a practical means of dirigible aerial navigation. Baldwin created a dirigible that was 95 feet long and powered by a newly-designed Curtiss engine. The Army purchased it and designated its first dirigible "SC-I" (Signal Corps Dirigible Number 1). Thus, Baldwin became known as "The Father of the American Dirigible." In front of an audience at San Francisco’s Golden Gate Park on January 30th, 1885, Baldwin offered the park manager a deal-he would jump from a hot-air balloon for $1.00 per foot of height, with 2,000 feet being the maximum. The crowd, unknowingly, witnessed the first public descent from a balloon with a parachute. Baldwin was now dubbed “The Father of the Modern Parachute.” Baldwin’s parachute jumps were nothing like modern parachute jumps. While holding on to a ring fastened to his dangling parachute, he would ascend in a sitting position on a small seat beneath his balloon. When he reached the desired altitude, Baldwin would pull a rip panel in his balloon to release the hot air, causing the balloon to begin a rapid descent. With the momentum needed to fill the parachute with air, Baldwin would then jump from the seat. Neither he nor his brother ever patented their parachute design and construction. Baldwin later commented, “We never thought anyone else would care to try it. He then began training airplane pilots and managed the Curtiss School at Newport News, Virginia. One of his students was the young Billy Mitchell, later to become a great advocate and champion of American military airpower. When the United States entered the First World War, Baldwin volunteered his services to the Army, even though he was 62 years old. He was commissioned a Captain in the Aviation Section of the Signal Corps and appointed Chief of Army Balloon Inspection and Production. Tom Baldwin, a former circus trapeze artist, made his first balloon ascent in 1875 and spent the next 10 years performing in balloons at thousands of shows and fairs across the country. To spice up his performance, on January 30, 1885 he made one of the first parachute jumps from a balloon in history. He made many more jumps, becoming known as "The Father of the Modern Parachute." ROTC Thomas Scott Baldwin was born on June 30th, 1854 in Marion County, Missouri to Samuel Yates and Jane Baldwin. He was only 12 years old when he witnessed the 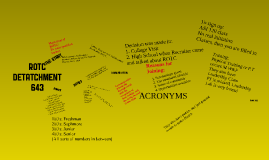 Transcript: ROTC Detatchment 643 The Start ROTC started when President Woodrow Wilson signed The National Defense Act of 1916 Main Goal of ROTC: To train qualified leaders Today, there are over 20,000 cadets involved in ROTC Ranks Cadet Private Cadet Private First Class Cadet Corporal Cadet Sergeant Cadet Staff Sergeant Cadet Sergeant First Class Cadet Master Sergeant Cadet First Sergeant Cadet Major Sergeant 100's: Freshman 200's: Sophmore 300's: Junior 400's: Senior (All sorts of numbers in between) Duties Duties are more than just doing the minimum, in ROTC EVERYONE has one duty or another With the idea that everyone has a duty, the feeling of being a part of a community is all around you Duties that relate to one's job are called specified duties There are also directed duties or implied duties that are duties that are less fixated just on your specific job. Communication: Communication is basically through email with the exceptions of their website and the newly formed Cadet Club ACRONYMS They also have parties, and just general events to make friends Decision was made in: 1. College Visit 2. High School when Recruiter came and talked about ROTC Reasons for Joining: 1. Scholarships given 2. The structured lifestyle 3. Sense of community 4. Opportunities available To sign up: ASI 120 class No real initiation Classes, then you are filled in Training: Physical Training or P.T occurs M W&F They also have Leadership Class PT is relaxed, Leadership Lab is very formal Thank you! 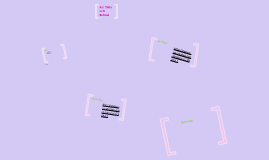 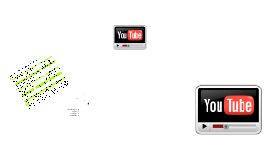 Transcript: ROTC what do you think about army? what's your dream? 1. MONEY 2. PEOPLE 3. PRIDE 4. EXPERIENCE 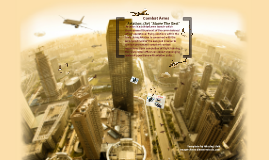 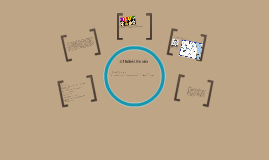 Transcript: By c/ SFC, Carter rank: O2 branch: U.S. Army unit: infantry, advance team 21 macv. 22nd ARVN ranger battalion d.o.b: 29 november 1948 (st. petersburg, FL) home city: cocoa beach FL, death: 03 march 1971 status: killed/ body not rcovered area of death: south vietnam 143351N 1073619E (YB807116) Kon tum province panel 04w line 018, on the wall Under small arms and mortar attack, 1lt Dubbeld and SFC James E. Duncan hopped in a depression for a foxhole. a mortar shell landed directly in the foxhole. the ranger medic said Dubbeld was killed instantly and Duncan lived for a few brief minutes after. an attempt was made to recover the bodies but due to the advancing communist troops, the rest of the 22 ranger battalion was forced to bury their lost soldiers in shallow graves on the spot. SFC James Duncan Vietnam campaign Vietnam service purple heart 1LT Dubbeld, Orie John I like to work on motors, cars, all things of the sort. national defense Thats all i found on him. no pics no leads on family, however he had a best friend who wrote on the virtual wall and said he his father was never the same, and he wished he could get a hold of Orie jr's son.