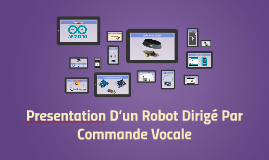 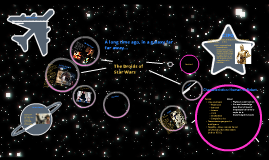 Transcript: The Robots of Star Wars Created in a time where science fiction movies were not particularly successful. According to Lucas, the largest grossing Sci-Fi movie prior to star wars was 2001, which made approx $24 million. The first "Star Wars" move has grossed $461 million domestically and $775 million worldwide. "I'm not much more than an interpreter, and not very good at telling stories." -- C-3PO Robot Communicates with a series of beeps. Physical structure. Generally obedient to its master. Performs specific role as "astromech droid". Puts itself at risk in order to help Luke and others. No regard for self when others are in danger. George Lucas' "A New Hope" heavily influenced by Joseph Campbell (studied origins of religions and myths of various cultures) and Flash Gordan. Human Has a spunky, almost sarcastic personality. Seems to react emotionaly to situations/people: Loyalty Concern Demonstrates progressive intelligence. C3PO is a protocol Droid Protocol Droids constructed to assist in sentient relations: they were built to physically resemble them, to act with etiquette, and are frequently used as translators. The Droids of Star Wars C3PO George Lucas Questions? Released in 1977 R2-D2 A long time ago, in a galaxy far far away... C3PO Moments Stands for "Second Generation Robotic Droid Series-2". R2-D2 is an "astromech droid" or "astro droid, typically serving as a mechanic or for navigation on starships. The lesser models were created with less intelligence, the better models with greater intelligence and possible rebellious tendencies. Behind the Scenes: R2-D2 Set the Stage for Sci-Fi Films Lucas generally worked alone. Prior to Star Wars, he had only produced two successful films: THX - 1138 and American Graffiti. R2-D2 Moments Characteristics: Human vs Robot http://starwars.com/explore/encyclopedia/characters/c3po/#!/media Human: Very emotional Worrisome Annoyed Intense Vocal Disobedient Complains a lot Demonstrates progressive intelligence Empathy - shows concern for not only humans, but other robots (such as R2D2). http://starwars.com/explore/encyclopedia/characters/r2d2/#!/media/videos Robot Physical construction His vast knowledge base (the billions of languages/cultures/people he is knowledgable about) Characteristics of R2-D2: Human vs Robot Star Wars Background Star Wars 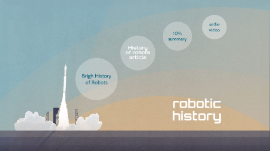 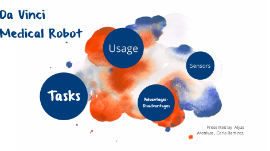 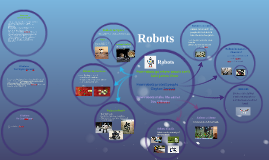 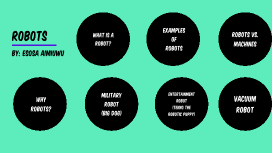 Transcript: Robots by: Esosa Aimiuwu Robots are different from other types of machinery because with the help of human programming, they can function by themselves, and they can also adapt to the enviroment they are in or around. What is a Robot? Some real life examples of robots is the humanoid robot named Sophia, there are service robots called Care-O-bots, and medical robot called TUG. These are not the robots you see on TV and in movies like the Transformers, Ultron, and Cyborg from the Justice League. Examples of robots The difference between robots and machines is that machines just repeat the same mothion over and over again. Robots can also do that, and so much more. Robots can be programmed to do a lot a task, unlike machines. Robots vs. Machines We have robots to make our human lives easier. Robots can do the things that make be considered to dangerous for a human to do. Robots could also do the things that we made be to lazier to do like cook, clean, get the remote, etc. Robots could be the future. WHY ROBOTS? The Military Robot (Big Dog) was created in 2005 by Boston Dynamics with Foster-Miller, the NASA Jet Propulsion Laboratory, and the Harvard University Concord Field Station. It is a quadruped robot that walks, run, and can carry heavy things. It is used to help the soldier carry their heavy gear. It cost $74,500. Military Robot (Big Dog) Here's the Big Dog Robot carrying soldiers gear. Picture of Big dog Here's what the Military Robot Big Dog looks like Picture Of Big Dog The Tekno the Robotic Puppy was created was launched in 2000, developed by Bob Del Principe, Brian Dubinksy, and designer Gary Leynes. Tekno was created to entertainment kids and be a play toy to them. The newer version of the Tekno the Robotic Puppy can be controlled by a iPhone or Android device. It cost about $60. entertainment robot (Tekno the Robotic Puppy) Here's what the Tekno the Robotic Puppy looks like. picture of Tekno the Robotic Puppy Here's a kid playing with the Tekno Robotic Puppy. picture of Tekno the Robotic Puppy Vacuum Robot The vacuum cleaner robot was created by 1996 by James Dizon. It is used to go around people's house and vacuum up all the junk laying around. It makes cleaning a lot easier because all you have to do it switch the on button and sit back and relax while the robot does all the vacuuming. It can cost between $150-$1,000. Here's what the vacuum robot looks like. Picture of vacuum robot Here's the vacuum robot vacuuming. Picture of vacuum robot 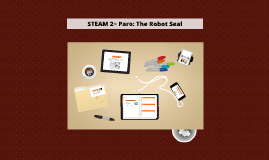 Transcript: Question 3: Name some advantages and disadvantages of using a robot to complete its task. According to parorobots.com, the robot seal is designed to provide the same benefits of animal therapy to autistic children and the elderly. It has been proven to relieve stress, stimulate interaction between patients and caregivers, and improve the relaxation and motivation of people that use it. Question 1: What task does the robot perform? What human function or task does this robot simulate? Ideas Advantages: No fur allergies Never tired Never in a bad mood, Won't bite a person Can learn to respond to a new name Can help the elderly to socialize more Disadvantages: Runs out of battery quickly-two hours Not a real person- people are socializing with a robot Introduction STEAM 2~ Paro: The Robot Seal Notes Question 5: Predict and explain how this robot may be altered to perform more or different tasks in the future. Ideas Paro is an interactive robot seal developed by Japanese company AIST. It is designed to look like a baby harp seal, and even makes sounds like one. Question 4: Describe the impact that this robot has had or could have on its intended audience. Paro is programmed to react to hits, gentle pats, light, and recognize the direction of voice. The robot can also be taught to respond to a name by the user, and learn to behave in the way that the user wants it to. For example, if you hit it, Paro will remember what it did and try not to repeat that action. In the future, Paro may be altered to have speech or act as an alternative to pets in places where pets aren't allowed, since it is already somewhat of a companion to the elderly in nursing homes. In the few nursing homes that have purchased Paro for their residents, it has been very successful. The robot seal actually has a calming effect, and is used as a formal "intervention" for elderly dementia patients that become agitated or aggressive. Question 2: How is the robot taught to perform its task? Ideas Pictures/Videos 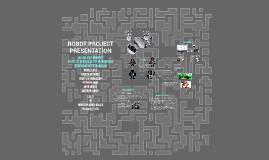 Transcript: MIGUEL LOPEZ MELISSA GUTIERREZ CHRISTIAN RICHARDSON NATHALEA NARIO OMAR ARAUZA MATTHEW CONROY The task of our robot is to locate and turn of the the red beacon, and deliver the green beacon across a starting line. The class then split into groups and within each group there were mechanical, electrical, and programing teams all working with one another to complete their assigned task. Main Task: Construct a functional IR board for the robot. PROJECT OVERVIEW MECHANICS LEARN HOW TO OPERATE EASY C SOFTWARE DEVELOP ROBOT CONTROL PROGRAM TEST AND FINE TUNE THE ROBOT PROGRAMMING PROGRAMMING TASKS Twenty minutes prior to the final testing, our robot stopped functioning Both motors simultaneously stopped working Our robot could no longer move With only twenty minutes remaining in class it was physically impossible to replace the motors and test our robot in time. THROUGHOUT THE WEEKS, WE HAD WRITTEN A VERY COMPLEX CODE THE T.A. TOLD US THERE WAS A SIMPLER WAY TO WRITE THE CODE USING STATE VARIABLES RE-WROTE THE ENTIRE CODE ON THE LAST WORK DAY HAD TO TROUBLE SHOOT ON PRESENTATION DAY GOOD PART - WE GOT THE ROBOT TO TURN OFF THE RED BEACON STILL HAD A LOT OF TIME TO TROUBLESHOOT THE SECOND HALF ROBOT STOPPED WORKING IN THE END Goal: To use and innovate ideas to not only create a function robot, like the one presented in the VEX manual, but to make slight adjustments to maximize performance. ELECTRONICS SUMMARY/WHAT WE LEARNED SAN JOSE STATE UNIVERSITY CHARLES W. DAVIDSON COLLEGE OF ENGINEERING E10 INTRODUCTION TO ENGINEERING In this lab, we group 21 were asked to mimic the Care-O-Bot's capability of turning off a stove and delivering a plate to its owner. For safety and practical reasons, the plate and stove in our scenario was replaced by two infrared beacons, each emitting its own signal distinguishing itself. E10-27 OG PROFESSOR AHMED BANAFA December 2, 2015 MELISSA & OMAR ROBOT PROJECT PRESENTATION PROBLEMS WE FACED create a robot that will turn off the red beacon capture the green beacon move efficiently Challenges Faced: - Solder's must be clean - Deciding what components should be soldered first to based on size. By combining the engineering disciplines of Mechanical, Software, and Electrical, we designed our very own autonomous robot but in the end failed due to mechanics of the robot.