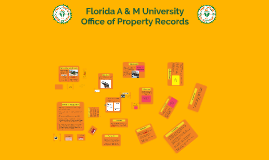 Transcript: Approval from Title III and/or Disposition Separation Picture of warehouse Relocation = 1 unit should be coded OCO 75XXX Stolen Assets All employees must account for University-owned property entrusted in their care upon separating from the University Accountable Officers, Deans, Directors, Chairpersons are responsible for their entire respective programs Any debt owed to the University must be settles prior to employee's departure Departments are responsible for clearing individual employees Performs risk assessments on property specifically at risk or vulnerable to loss Inventory For items bought with Title III and Federal Funds Lock equipment in secure locations Each department should appoint a Property Designee to track and monitor property assigned to his or her respective areas University Property Bar Code Relocation Request must be completed and Moving and Setup will remove/relocate equipment To ensure that all University tangible assets are properly recorded and accounted for in accordance with the Federal, State, and University regulations Equipment is maintained by the Property Office Requesting department responsible for ensuring devices containing storage media are sanitized Mission Statement What is "Property"? OBJECTIVES: Insurance Total Cost: $ 5,125.00 Foundation Purchases Software license fees considered taggable assets if: Total dollar amount is greater than $5,000 Covers more than one year (12 months) Items previously written off will be reinstated Property Representative and Property Designee must verify and sign documents Write Offs Konica Minolta Bizhub C654 Code as OCO For all University assets worth more than $1,000 Email: propertyrecords@famu.edu Phone: (850) 599-3678 Fax: (850) 561-2607 Maintain a property database Affix custodial responsibility to end user(s) for all assets assigned to the department Hard Drives Installation: $ 200.00 Inventory For items worth $ 100.00 to $ 999.00 Show a picture of a FAMU WHITE Tag Located at the Physical Plant Operations Building B Monitors and Tracks University Equipment Picture of Yellow OFC Decal Any item(s), regardless of age, cost, origin, source of funding, or Example: Tag 111222 Dell CPU Laverne Washington Room 201B Off Campus privileges must be approved by employees' supervisors Request of two or more of the same item requires justification Shipping: $ 250.00 Setup: $ 175.00 condition, must be disposed of by the Property Office Office of Property Records Track items that are removed from campus Liaison between: Designee's department Office of Property Records Moving and Setup Relief of Accountability Relief of Accountability Property Employees Tag Asset(s) at the Central Receiving Warehouse Tagging Usable and functioning surplus assets are recycled within the University at no cost to the requesting department Red Tags Property inventory is conducted once every fiscal year (July 01 - June 30) of all items worth more than $ 5,000 All items are scanned with a hand-held computer The Property Office and Risk Management must ensure that all content is properly insured 2380 Wahnish Way Tallahassee, FL 32310 Regular Business Hours: 8:00 am to 5:00 pm Monday through Friday The University Foundation Office receives item donations and gifts This office notifies the Office of Property Records when a donation or gift is received and accepted on behalf of the University Assets are then tagged accounted for in the same manner as purchased assets. Property Designee Sample Database Contact Us Any equipment that is lost, stolen, or otherwise unaccounted for must be reconciled on a Report of Survey form Picture of Section D Warehouse Equipment, fixtures, and other tangible personal property Life of which is one year (12 months) or more Non-consumable or non-expendable Items worth $5,000 or more per unit according to Florida State Statute Chapter 273: Operations Capital Outlay (OCO) You must notify the Office of Property Records within five (5) days of your receipt of newly acquired equipment to be tagged and/or installed Off Campus Trade - Ins Report of Survey and Police Report needed Software Disposition Title III Tags Property Designee Role Departments are able to trade in University-purchased assets towards the purchase of other assets Requires Property Office and Property Survey Board approval What We Do Contract and Grant required if asset is purchased with these funds Konica Printer: $ 4,500.00 Pictures of hard drives in the warehouse Florida A & M University Office of Property Records Moving and Setup Picture Moving and Setup 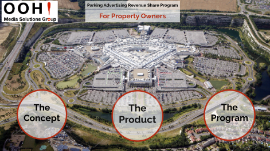 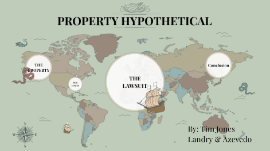 Transcript: By: Tim Jones Landry & Azevedo PROPERTY HYPOTHETICAL THE PROPERTY BLACKACRE The Happy Couple The Happy Couple In 1958,Mr. and Mrs. Smith purchase 20 acres of land with one improvement called "blackacre" as tenants by the entirety. The Prodigal Son In 1982, the Smith's youngest son, Frank, comes to his father and says, "I want my inheritance now." Without conveying any property, Mr. Smith hires a surveyor to divide the property into thirds, keeping Lot 1 for he and his wife, and proclaiming to give Lot 2 to Frank and Lot 3 to his older son, Mike. The survey is recorded. The Prodigal Son Tragedy Strikes In 1992, Mike dies intestate (without a will) in an untimely accident, leaving behind two twin sons born out of wedlock, Zach and Adam. One year later, Mr. Smith dies leaving behind a will stating that he bequeaths all of his remaining interest in Blackacre to his loving wife for the rest of her life and then to his two dear sons, Frank and Mike. Tragedy Strikes Terrible Twins Dave and David party at the house on Lot 3 all night, every night, allowing the property to fall into disrepair. Tired of the loud noise, Frank erects a fence around the back of Lot 2 in 1999. Terrible Twins Dadgum Guvmn't Over the next 5 years, the County, by eminent domain, acquires an easement at the back of Lot 3 for a road that is never completed and the Federal Government declares the creek bed to be in a FEMA flood zone. Dadgum Guvmn't Goodbye Mrs. Smith In 2007, Mrs. Smith dies, leaving a will that bequeaths "Lot 1 of Blackacre," using a correct metes and bounds description, "to my only son, Frank, for his loving care over the years." There is no savings clause in the will. Three months later, in a cash sale, Dave and David convey "Lot 3 of Blackacre," using a correct metes and bounds description, to PJ, a property renovator, via a General Warranty Deed. Goodbye Mrs. Smith $$$ $$$ In 2010, James, a Michigan resident, sees a renovated Lot 3 for sale listed on-line. James calls PJ and says it will be the perfect retirement property and is sure he wants to buy it. PJ, who has never lived in the house, and is a licenesed real estate agent, assures James over the phone that there are no issues with the property and he commits to purchasing it. James calls Reasonable Ron's Title Agency to draft up the necessary paper work. Knowing both the Smith family and PJ for many years, Reasonable Ron conducts a quick title search and then sends James and his lender, Corey, Title Commitments to be underwritten by Keese Title, reflecting only the FEMA taking and the County easement. Making the Sale Unhappy Neighbors The sale goes through. PJ conveys Lot 3 to James via General Warranty Deed. James and Kim both get 2006 ALTA Title Policies. Everything is fine for many years until 2018 when Frank and James get into an argument and Frank erects a gate over the portion of the driveway that runs over Lot 2. Unhappy Neighbors THE ISSUES First, who owns what? The Issues By Color of Title: Dave - 25% of Lot 2 PJ - Nothing David - 25% of Lot 2 Frank - 100% of Lot 1 - 50% of Lot 2 - 50% of Lot 3 James - 50% of Lot 3 First, who owns what? Second, what are the other issues on Lot 3? The Issues First, who owns what? Second, what are the other issues on Lot 3? Third, how do we fix it? The Issues THE LAWSUIT THE LAWSUIT WHO ARE WE SUING? Frank Quiet Title Tort Liability Temporary Injunction Perscriptive Easement / Easement by Necessity Frank PJ Breach of Covenants of Warranty Failure to Disclose PJ DAVE & DAVID Breach of Covenants of Warranty Perscriptive Easement / Easement by Necessity Dave and David REASONABLE RON'S Breach of fiduciary duty. Reasonable Ron's KEESE TITLE Breach of Contract. Bad Faith (Consumer Protection). Performance. Keese Title Company Kim Probably no theories of liability, but will be named as a Defendant as an interested party. Kim Conclusion Conclusion Thank you! Tim Jones Landry & Azevedo (865) 851-7050 tim@lalawknoxville.com 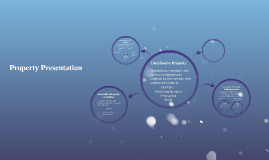