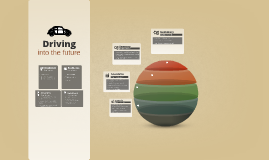 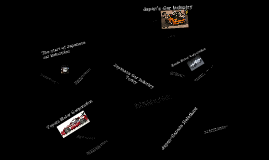 Transcript: Japan's Car Industry The Japanese automotive industry is one of the most prominent industries in the world. Japan was the world's largest vehicle manufacturer in 2008 but lost one rank in 2009 to current leader China. The start of Japanese car industries The first Japanese car 1958-1970 The japanese started in 1960, They started with small cars so ther would be lower taxes than the larger cars. Rapidly increasing domestic demand and the expansion of Japanese car companies into foreign markets in the 1970s further accelerated growth. Japanese Car Industry Today Japan's car industry continues to flourish, its market share has risen again, and in the first quarter of 2008 Toyota surpassed American General Motors to become the world's largest car manufacturer. Today, Japan is the third largest automobile market and, until China recently overtook them as the largest car producer in the world. Still, automobile export remains one of the country's most profitable exports and is a cornerstone of recovery plan for the latest economic crisis. Mazda Motor Corporation In 2007, Mazda produced almost 1.3 million vehicles for global sales. The majority of these (nearly 1 million) were produced in the company's Japanese plants, with the remainder coming from a variety of other plants worldwide. Mazda began as the Toyo Cork Kogyo Co., Ltd, founded in Japan in 1920 Toyota Motor Corporation The company was founded by Kiichiro Toyoda in 1937 as a spinoff from his father's company Toyota Industries to create automobiles. Three years earlier, in 1934, while still a department of Toyota Industries, it created its first product, the Type A engine, and, in 1936, its first passenger car, the Toyota AA. Japan-Canada Relations 23.4% of all automobiles imported to canada are from Japan, and cost $16,928,835,200 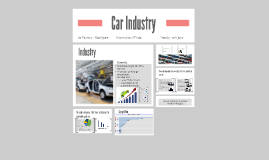 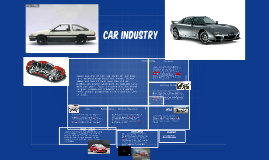 Transcript: 1990s - 2000s In the 1960s Japan made a new type of car called a kei car, which means light automobile. These cars usually had very small engines that went up 360CCs, but for american export the would make them go up to 600CCs. They made these to keep taxes low, than making larger cars which costs more tax. In 1904, Torao Yamaha made the first bus which was powered by a steam engine. But in 1907 Komanosuke Uchiyama made the first japanese car that ran on gasoline. In 1911, Kwaishinsha Motorcar Works was made making a car called the DAT. By 1926 Jitsuyo Jidosha Seizo Co., first made by William R. Gorham merged with Kwaishinsha Motorcar Works to make DAT Automobile Manufacturing Co. Toyota began building cars in 1936 with early cars made for military benefits. 1970s References American Design Social Impact Cars that were built before World War II were based on more american or european models. In 1917 the Mitsubishi Model A was made, resembling the fiat A3-3 design. (Fiat was a company that owned most of what is now chrysler). The Model A was considered to be Japans first mass production car, with over 22 units produced. http://en.wikipedia.org/wiki/Automotive_industry_in_Japan 1960s The first Ford company in japan was made in 1925, and was set up in Yokahama. Between 1925 and 1936 America's big three motor companies(General Motors, Ford, and Chrysler) in Japan produced 208,967 cars, compared to the regular manufacture recored which was 12,127 cars. American Migration Car Industry Japan's car export has became very big due to their reliability and they're very affordable. But in the recent years it has dropped because of the competition from China, South Korea, and India. In the 1970s Japanese cars were very popular in Britain. The Nissan Datsun was very popular to the normal british buyer. Japan's car export sky rocketed with Mitsubishi and Honda selling to the U.S. With Japan upgrading its skills to making cars they also upgraded their use for the machine with the D1 Grand Prix or D1GP for short. They drift through a pass (also called a Toge) if they lose their race, they're not out of the competition but have a chance to redeem there selves by racing another competitor who also lost before. The Start Japan was one of the top three of the most cars manufactured since the 1960s. In the 1980s and 90s it took over the U.S as production leader with over 13 million cars made per year. Japan is currently the third largest automotive producer in the world, their annual production is 9.9 million cars in 2012. 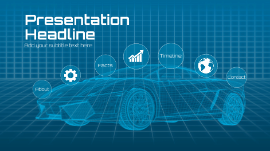 Transcript: Presentation Headline Add your subtitle text here About Introduction Make a cars & technology themed presentation The Details Get to the main point of your presentation. Add your own content Facts Did you know... self-driving cars have already been involved in 4 fatal incidents! Data Present your charts, graphs or other interesting data! Q1 Q2 Q3 Q4 Tesla sales Timeline Timeline Can you predict the future of cars? 1987 1987 First electric car... starts a massive warehouse fire! 2005 2005 Major car makers start testing self-driving cars. 2030 2030 Illegal to drive a car by yourself. Yay DUI! Global Scale Use the world map to show locations Contact How can People Get in Touch with You? Contact Details email@site.com website.com fb.com/page #hashtag lnked.in/user https://prezibase.com Get this Prezi Template from: PS: valid Driver's license required for all presenters! 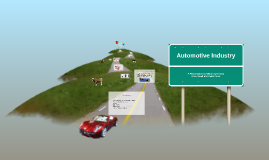 Transcript: How it works 1 Development of the Automotive Industry Car-Manufacturing (costs) Safety Hybrid cars Electric cars Future image (concepts) The history of car safety started in 1869 in Ireland (first car accident) The first car safety-device was a four-wheel-hydraulic-brake-system In the 1930s safety glasses were included The year 1936, a backup-brake-system was invented by Hudson Terraplane In 1947 padded dashboards, headlights and disc brakes were invented 1958 a Volvo engineer invented a three point belt and headrests 1966 the USA decided for a more strength automotive safety They began to make crash test for public and they added a new law (passenger cars have to use seatbelts since 1984) The first big frontal crash test was in 1995 http://www.gocurrency.com/articles/history-automobiles http://en.wikipedia.org/wiki/History_of_the_automobile http://www.telegraph.co.uk/motoring/picturegalleries/8463532/In-pictures-electric-cars.html http://www.new-electric-cars.us/electric-cars-information-for-those-seeking-for-safety-cars-and-greener-future/ http://www.madehow.com/Volume-1/Automobile.html http://www.handelsblatt.com/auto/nachrichten/toyotas-serienreifes-wasserstoff-auto-nur-noch-ein-jahr-bis-zur-zukunft/10103650.html http://www.trendsderzukunft.de/alternative-antriebe-urin-betriebenes-auto/2009/07/20/ http://auto.howstuffworks.com/fuel-efficiency/vehicles/question262.htm http://www.crashtest.org/history-car-safety http://www.toyota-ej.co.jp/english/process/index.html) http://www.bmwgroup.com/e/0_0_www_bmwgroup_com/produktion/fahrzeugfertigung/automobilfertigung/erlebnis_produktion/prod_prozesse.shtml https://agrarheute.landlive.de/boards/thread/50205/page/1/ 5 A Presentation by Walter Schneider, David Rech and Denis Faust 2 3 Car-Manufacturing Electric car Development of the Automotive Industry It produces his own electricity with his fuel cell (chemical reaction on Hydrogen and Oxygen) It emits water vapor you can drive over 500 km with a full reservoir Sources are one of the best candidates for future cars : - it is really silent - and hopefully soon replaces the common cars, because they produce to much pollution on the other hand : - you have to recharge the battery a lot - the electric cars are heavier than traditional ones - they are dangerous for pedestrians, because of their soundlessness Thanks for your attention! Hybrid cars 2 seats 15 kilowatt engine when full charged lasts about 118 kilometers release price probably 7000 pounds (8788.15 euros) Press shop, where automotive parts get produced Aluminium and steel components this materials form chassis Chassis gets painted with several layers creates equipment from resin molding the assembly gets attached into the chassis the inspection average costs by Volkwagen are around 18,743 euros 4 Automotive Industry Renault Twizy It needs three minutes on a hydrogen refuel station (electric cars need many hours on a power socket) The price is 50.000 euros in Japan Structure Future image Safety one of the most global industries, because there is production and purchase of cars all around the world huge increase of production- and sale units first steam powered car , 'farpier à varpeur' by Nicolas Joseph Cugnot first car within an combustion engine running on fuel gas, an ancestor of today's common cars, by Francois Isaac de Rivaz in 1807 first successfully working two-stroke gas driven engine, by Jean Joseph Etienne in 1860 other important car inventors Karl Benz and Henry Ford 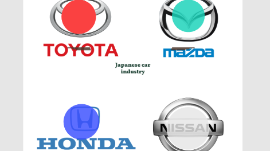 Transcript: Japanese car industry Topic 3 Automobiles are amongst the major export industries along with consumers electronics, ores such as copper, iron and steel. We’re gonna take a closer look at the automobile industry. Many of these companies started at the end of WW1 where they started manufacturing military- type trucks, companies such as Toyota and Nissan began to rise with strong help from the government. This was the start of the Japanese automobile industry. During WW2 Japanese companies was mainly producing military trucks and buses. After WW2 Japnese companies were only allowed to manufacture a limited amount of trucks which led to bankruptcy in some companies such as Toyota. During 1955 was the automobile industry started to grow and flourish. In 1955 the industry only produced to 10,000 a year, but soon rocketed up to millions of cars a year by 1970. Now the industry generally produces 10 million a year. Started off as a division of Toyoda Automatic Loom Works especially designed to manufacture cars, directed by the founder’s son- Kiichiro Toyoda. After travelling to America and Europe to inspect their automobile productions in 1929, he later on researching gasoline-powered engines in 1930. In 1934 it released its first Type- A engine thus was the beginning of Toyota. Early models resemble American Models such a Dodge Power Wagon, with some parts interchanging. After World War 2, Japan was in an extreme economic difficulty position. Although a variety of models and cars were released. In 1949 Toyota was on the edge of a cliff, cornered by fees and behind them? A pool of lava full of bankruptcy. They later received a loan. Things weren't looking good in the company in 1950 with low manufacturing rates and once again in a position of going out of business. The company reduced its wage, thus there was a two-month strike. It resulted in the resignation of Kiichiro Toyoda and the Chief Executive Officer of Toyoda Automatic Loom Works came into power. The Korean war began, this was not the downfall of the company but the uprise, America placed thousands of orders for cars. Thus the company was revived. Toyota 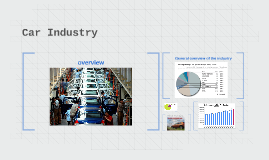