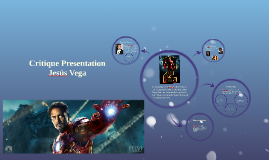 Transcript: Favreau's expertise is the action-comedy genre. The methods he used were quite effective. The script gave the characters the ability to show off, even if it was for a short time. Directed by Jon Favreau, Iron Man 2 is the second movie of the franchise. Tony Stark tells the world that he is Iron Man, and now he must deal with the consequences. His purpose for the movie Opinion What I enjoyed the most was Robert Downey Jr.'s performance as Tony Stark; the least, the lack of meaningful message and character development. The movie follows a linear, chronological order. Favreau, above all, wanted to express that overconfidence can and will get you hurt, and that the good guys always end up triumphant. He is successful in doing such. Script To bring to life the beloved and acclaimed superhero. Director's point Jonathan Kolia Favreau was born in 1966, in Queens, NY. He has directed hits like Elf and Cowboys & Aliens. He has appeared in the movie Couples Retreat and the series Friends. He plays Happy in the movie Iron Man. The soundtrack used in this film is a more upbeat, rock type of music, which separate this flick from the rest. Critique Presentation Jesús Vega Music About the Director Evaluation Order

Transcript: *What Were you trying to accomplish? The tiger A Better understanding of an endangered species >How did you make your image? Researched information on the tiger, and added it to the photo. Research, tiger photo, color, background Critique + 3 points where you are proud of your work + 3 points were you could improve The color, eyes.and text the nose, ears and filling in space Craftmanship >What was your process? Concept *What was your Concept? 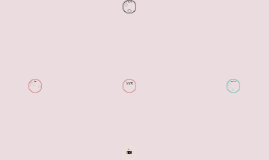 Transcript: Can We Build AI Without Losing Control Over It? By Sam Harris Visual aids provide insight The focus is stated at the beginning of the talk Ideas are clear and concise He picks topics to support Style Support and Elaboration Images are caricatured with little use of words How will the development of new AI technology be managed by humans? Presentation Skills He has exceptional tone and speech He adds comedic flare Focus There is no word density in his presentation Ideas in the presentation progress efficiently Organization Begins with a thesis Makes many references to outside sources Remains relevant throughout the presentation 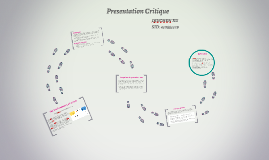 Transcript: Comparison to presenter's case QIUCHEN XU SID: 430553329 Oliver Wood was convicted on several counts of using his position as a director of SEO Company dishonesty, including withdrawing more than $29,000 from the company's bank account for his personal use. He also pleaded guilty to make a false statement in documents lodged with the ASIC. Presentation Critique Title: Palmer's victory in nickel court case Critique questions Do you think court treat such breach of duty case consistently？ Where the court would draw the line with regard to the contrary to s181 duty, is it actual breach or potential breach? Do you think the legislation should capture the potential breach issue and cover the grey legal area, why or why not? The brief summary of article Facts: Robash, a company which holds shares in Gladstone Pacific Nickel wanted the NSW Supreme Court to allow it to bring proceedings in Gladstone's name against Mr Palmer and three of Mr Palmer's associated companies according to s236 of Corporations Act. The plaintiff (Robash) alleged Mr Palmer had breached his duties as director of Gladstone when he bought the Yabulu nickel refinery in 2009 with estimated value of $250 million. More specifically, Mr Palmer had negotiated with BHP to buy Yabulu for his own interests, rather than negotiating the sale to Gladstone which contravenes s181 of Corporations Act. Outcome: Supreme Court dismissed the application to bring the derivative action on behalf of GPNL. The judge held that the evidence falls short of establishing that there is a serious question that Mr Palmer was in a position of conflict or possible conflict of interests at the time he was the director of GPNL because BHP firstly approached Mr Palmer was not the director of GPNL about this deal. Secondly, the important reason that BHP negotiate with GPNL is relying on the fact Mr Palmer is the director of the company at that time. Most importantly, Mr Palmer only step in when there is 'no prospect that BHP will reach the deal with GPNL' therefore there is no conflicts of interest existing then there is no breach. Given the Corporations Act is the Federal Act. Each and every single court in Australia should be administrated consistently regardless it is the superior court or the lower court. Palmer's victory in nickel court case http://www.theaustralian.com.au/business/legal-affairs/palmers-victory-in-nickel-court-case/story-e6frg97x-1226186239901 Corporations Act 2001 (Cth) s181, s236, s237 In the matter of Gladstone Pacific Nickel Limited [2011] NSWSC 1235 http://www.austlii.edu.au/au/cases/nsw/NSWSC/2011/1235.html Relevant provisions Reference Judgement Palmer was potentially involved much more huge amount compared to Wood just because he is not involved in conflict of interests at that particular time,provided that he was the director of the company all along the negotiation. s181 good faith--directors and other officers (1) A director or other officer of a corporation must exercise their powers and discharge their duties: (a) in good faith in the best interests of the corporation; and (b) for a proper purpose. 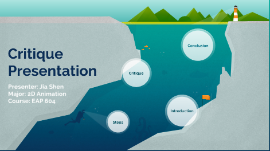 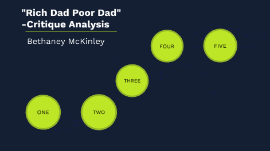 Transcript: "Rich Dad Poor Dad" -Critique Analysis Bethaney McKinley Interpretive Paradigm ONE Generally the Interpretive Paradigms main purpose is to understand how meaning is created. The context is normally subjective and contextualized, with an overall more creative process. TWO Claims The author of this particular piece makes the claim that "Getting a good education and making good grades no longer ensures success,..." Assumptions and Main Points THREE Traditional view of going to school and managing finances Old school techniques are no longer relative Lack of financial literacy in youth Data FOUR The collected data seems to be mostly observation based information. The Author forms most of his opinions and ideas off of personal experience and pure observation of others. FIVE Overview Overall I agree with the authors claim that Education is not the only way to ensure successful futures. Financial literacy amongst other critical pieces of knowledge and tools are key to success in this rapidly evolving age. 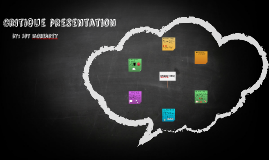 Transcript: What I Learned ABC While Watching information about her Behaviors - fiddling with my fingers - cringing - I should focus on controlling my body movements - Public presentation helps conquer fear of public speaking -Watching myself present highlights my strengths and weaknesses are ABC's before, during, and after good job! information about her major Did I do what the assignment asked? Critique presentation information about her job Cognitions - Do I really sound like that? - What are my hands doing? THank you! My Critique on Myself Affects - uncomfortable - nervous Some things I Did Well - thought stopping - deep breaths - act as if Self Management Techniques - Dressed well - Maintained eye contact - Avoided the words "um" and "like", which I tend use - Practiced the presentation many times before the date By: Joy moriarty - Move my legs and hands a lot - Used the word "and" a lot, instead of starting a new sentence - Included more information about her job at Comcast - Make the presentation more succinct 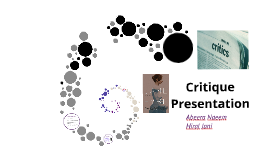 Transcript: Use of other analysis Madness is not determined by gender Bertha is the further oppressed version of Jane Author did not use examples of "mad" men Argument Source Information Brontë does not confine Bertha within a Romantic narrative mode. Her role within the realist Bildungsroman is as significant as Jane's: she overspills its boundaries which adds to her importance rather than detracts from it. Brontë defies the negative meanings towards madness and woman by using "madness" as Jane's motive to succeed. Brontë shows Bertha as a reading of Jane, but she dramatizes the oppression Bertha faced. Jane came out independent, Bertha came out more oppressed. Main Point Source To show that Bertha is not equated with madness because of her gender, rather to show the denouncement of women in the nineteenth century. Madness is not a mere disruption, rather, Brontë recognizes it as a power that recognizes wrongs and will act to right them. Madness can occur to anyone of independent mind, if confined to the 19th century white Protestant woman. Ex: Bertha, Jane, and Mrs.Reed Jane Eyre and Madness "Equating Madness with Femininity" Jane (passion, headstrong) Bertha (mentally unstable) "The Mystery at Thornfield: Representations of Madness in Jane Eyre" Abeera Naeem Hiral Jani Observations Continued... Subject Nineteenth Century Literature Criticism. Ed. Kathy D. Darrow. Vol. 228. Detroit" Gale. Literature Resource Center Critique Presentation