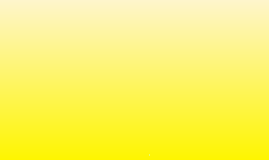 Transcript: Needs Analysis Project: Background (K)now or (T)hink 3 most important needs of people with MS Experience Knowledge Different views on what people with MS need Spending $18 million We have met people with some common needs Participants said it was pretty good What other information would I want? Most organisations could make better use of funds if there was better information to assist decision-making "You'll be right. Losing your job is bad luck but it's not the end of the world. You'll get over it." "It sounds like you need to get out and meet people. Maybe you should join an interest group. Can I help you find something in your local area?" "It sounds like you are going through a tough time. Your feelings sound reasonable considering the circumstances but sometimes these things can become a bit overwhelming. Would you mind if I ask you a few simple questions that will help me get an idea about whether you might actually be becoming depressed?" Evidence-based practice in service delivery Evidence-based practice in service planning Sources of evidence Sufficient evidence Ensure that MSL remains a leading authority on MS and the peak body for delivering services to people with MS in the future Individual service package funding: Bill after delivering the service More competition from non-profits and for-profits Clients can choose providers Our future is not certain Limitations of surveys: Unintentional bias Only given to service users Only enquire about existing services or limited pre-defined options 1. Biased 2. Non-representative 3. Lack insight Government policy identifies key Organisations largely determine how to achieve the outcomes Best available evidence... What can we do ? The Project will not... 1. Produce a set of completed services and products which must be rolled out 2. Produce a list of services and products to be discontinued 3. Tell management where to allocate its resources for service delivery 4. Prescribe a new model of service The Needs Analysis Project will: 1. Identify a detailed set of unbiased consumer needs 2. Increase our understanding about areas to lobby government for increased funding 3. Identify advocacy needs 4. Produce data to support strategic direction and areas for future consideration 5. Identify consumer segments not currently known 6. Confirm many current assumptions about consumer needs 7. Highlight some assumptions which are unfounded 8. Find some service gaps 9. Produce data to support marketing campaigns 10. Identify priorities for service development 11. Identify ways to make services more individualised, flexible and responsive 12. Tell us about potential consumers Project Manager: Megan Varlow, Program Office Deep, insightful understanding Consumers: Regional Needs Assessment What is available? What important services are not available in some areas? Are there any access inequities? What priority needs are not being satisfied? Voice-of-the-Consumer Needs Assessment 1. Critical Questions Workshops in NSW and Victoria 2. Interview guide workshops for each critical question 3. Interviewer training 4. Interviews with relevant consumers 5. Collation workshop Professional development Build relationships Improve communication Gain first-hand insight into the real lives of our consumers Appreciate how future organisational changes are driven by consumer needs Involve staff from all divisions Spread the work load Minimise the impact on services and other work activities Flexibility in scheduling interviews Summary of key requirements in each area of investigation Synopsis and recommendations to the Project Board Erika Coxhead Project Manager, Program Office 2. Voice-of-the-consumer needs assessment + carers outcomes health professionals lots of consumers + lots of staff communities Consumer participation family members Service providers Build relationships Not sufficent to ensure a strong future for MSL Government policy or Achieve intended outcomes Scope friends neurologists Improve communication Appreciate and support the need for future change Registered + not-registered People diagnosed with MS Appeal to the range of intended users Build the evidence we need Rely on the best evidence available + intuition + expert advice Accommodate unique needs and desires of people with MS Live within MSL's catchment Lots of interviews = Insight into the real lives of our consumers People affected by MS We need to develop a deep understanding of our clients needs and drivers Others 1. Regional needs assessment 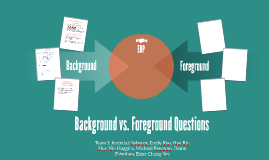 Transcript: What is a Background Question? General knowledge about a medical condition or drug therapy Basic pathophysiology, anatomy, biology, and that are drug related Answered by tertiary resources Background questions are not typically used as evidence based decision-making tools Tertiary Resources? What? Where? A tertiary resource is a source that summarizes, indexes and/or simplifies information found in primary and secondary sources. The tertiary source used will be determined by the type of background question ask. EBP Background Foreground The place of a BACKGROUND questions in EBM? Builds and reinforces foundational knowledge Prepares us for deeper investigation if needed Provides key, relevant, standardized medical knowledge Background vs. Foreground Questions THANK YOU! Team 1: Jeremiah Sabocor, Emily Koo, Hye Rin Hur, Nia Huggins, Michael Panoyan, Diane Estephan, Ester Chung Seo Examples Let's Start with some Categories and Resources! Let's try a scenerio... 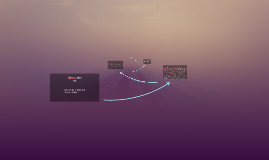 Transcript: Search and Seizure: the phrase that describes law enforcement's gathering of evidence of a crime. Under the Fourth and Fourteenth Amendments to the U.S. Constitution, any search of a person or his premises (including a vehicle), and any seizure of tangible evidence, must be reasonable. Mapp v. Ohio 1961 The Circumstances This case established the exclusionary rule, requiring illegally obtained evidence to be excluded from trials. The exclusionary rule goes in effect unless the police would have found the evidence anyway, or the police thought they were following fourth amendment. This has caused much controversy because people have been let go despite being proven guilty because the evidence was deemed impermissible. The Ruling Dollree Mapp and her daughter lived in Cleveland, Ohio. After receiving information that an individual wanted in connection with a recent bombing was hiding in Mapp's house, the Cleveland police knocked on her door and demanded entrance. Mapp called her attorney and subsequently refused to let the police in when they failed to produce a search warrant. The police again sought entrance to the house. Although Mapp did not allow them to enter, they gained access by forcibly opening at least one door. Mapp confronted them and demanded to see their warrant. One of the officers held up a piece of paper claiming it was a search warrant. In the course of the basement search, police found a trunk containing "lewd and lascivious" books, pictures, and photographs. As a result, Mapp was arrested for violating Ohio's criminal law prohibiting the possession of obscene materials. At trial, the Ohio court found her guilty of the violation based on the evidence presented by the police. When Mapp's attorney questioned the officers about the alleged warrant and asked for it to be produced, the police were unable or unwilling to do so. Mapp appealed twice to the Supreme Court of the United States. The case came down to this fundamental question: may evidence obtained through a search in violation of the Fourth Amendment be admissible in state criminal proceedings? The Fourth Amendment states "The right of the people to be secure in their persons, houses, papers, and effects, against unreasonable searches and seizures, shall not be violated, and no Warrants shall issue, but upon probable cause . . . and particularly describing the place to be searched, and the persons or things to be seized." The Fourth Amendment, however, does not define when a search or seizure is "unreasonable" nor does it specify how evidence obtained from an "unreasonable" search should be treated. Due Process: The Fifth Amendment says to the federal government that no one shall be "deprived of life, liberty or property without due process of law." By Courtney Williams and Boston Whipple The court (led by Earl Warren) ruled 6-3 in favor of Mapp. Because the police were searching the house illegally, they were going against Boyd v. United States which said that "any forcible and compulsory extortion of a man's own . . . private papers to be used as evidence to convict him of a crime . . . is within the condemnation of . . . [the Fourth Amendment]." However, in Weeks v. United States (1914), the Court ruled that the Fourth Amendment "put the courts of the United States and federal officials . . . under limitations . . . and forever secure[d] the people, their persons, houses, papers and effects against all unreasonable searches and seizures. . . ." which does not bind state officials. In Mapp v. Ohio, the supreme court decided that these rulings should apply to the state governments as well as the federal government. The Issue and Terms Precedent Mapp originally argued that she had a right to the materials because of her first amendment right to free speech but her appeal was denied. She then argued that the police should not have been allowed to use the evidence they found because they were not able to produce a warrant. This went against the right to due process and was unlawful search and seizure as outlined in the fifth and fourth amendments respectively. 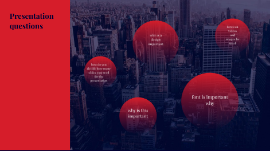 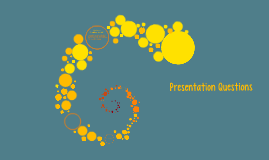