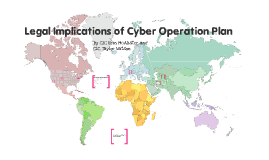 Transcript: By C1C Erin McAlister and C1C Taylor Watson AFI51-402 - devices designed to kill, injure, or disable people, or to damage or destroy property. Destroying Iranian centrifuges in the Natanz nuclear facility. Qualifies as a weapon. Harold Koh, Legal advisor to the State Department defined "use of force" for Cyber Activities as: “Cyber activities that proximately result in death, injury, or significant destruction would likely be viewed as a use of force” There is no significant destruction in Iran Domestic Authorities Natanz Nuclear Facility UN Charter Article 41- the Council may decide what measures not involving the use of armed force are to be employed, and that it may call upon the Members of the United Nations to apply these measures. The Article establishes that the measures include interruption of economic and diplomatic relations and communications LOAC Title 10 - governs DoD which governs USAF. Cyber Command dual-hatted but team is made up of USAF personnel Sec Def created US Cyber Command with a memo on June 23, 2009 International Legal Implications Legal Implications of Cyber Operation Plan Resolution 1696, July 2006 - demanded Iran halt Uranium enrichment process Passed Resolutions 1737(2006), 1747 (2007), 1803 (2008), 1835 (2008) and 1887 (2009) Resolution 1929, June 2010 - enacted even greater sanctions on Iran for its consistent violations of the NTP and IAEA Does it Deploy a Weapon Target: Natanz Nuclear Facilities SCADA programmable logic control systems (PLCs) Location: Afghanistan CIA outpost Payload/Weapon System: Logic bomb carried by a worm titled Stuxnet. Deploy zero days Desired End State: Destroy centrifuges and render nuclear facilities inoperable Weapon Design and Deployment Team: 24th Air Force, 67th network warfare wing, Capts McAlister and Watson, and select other members of US Cyber Command Questions, Comments and Concerns Existing Resolutions Method of Introduction Introduced in Afghanistan through the internet Path taken to target Worm travels through network on restricted nodes Physical effects Disabled uranium enrichment centrifuges Destruction of property within Iran Article 2(4) Concerns Military necessity - An attack or action must be intended to help in the military defeat of the enemy, it must be an attack on a military objective, and the harm caused to civilians or civilian property must be proportional and not excessive in relation to the concrete and direct military advantage anticipated. Distinction - The acts of war should be directed towards enemy combatants, and not towards non-combatants caught in circumstances they did not create. Proportionality - An attack cannot be launched on a military objective in the knowledge that the incidental civilian injuries would be clearly excessive in relation to the anticipated military advantage Humanity - least possible expenditure of life, time, and physical resources. Chivalry - waging of war in accord with well-recognized formalities and courtesies. Does This Constitute an Attack? Does it constitute an attack UN resolutions UN Charter Sovereignty considerations Weapon LOAC Cyber Plan: Iranian Disruption of uranium processing and enrichment (IDUPE) UN Charter Sovereignty Concerns 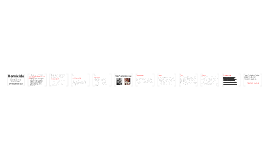 Transcript: He was attacked once before, but on November 28th, 1994, Dahmer was killed by a fellow inmate, Christopher Scarver. He was beaten with a broom stick and died on his way to the hospital. Jeffrey Dahmer Case http://criminal-law.freeadvice.com/criminal-law/violent_crimes/degrees.murder.htm http://www.chicagotribune.com/topic/entertainment/jeffrey-l-dahmer-PECLB001255.topic The most serious homicide, thatindicates that a person calmly decided to kill another person, decided how to do it, and carried out their murderous plan. These are intentional murders, Especially where the killer plans the killing. These are typically the capital form of homicide. On July 22, 1991, Jeffrey was attmepting to create another victim, but it didn't work out so well for him. The man was able to escape and get the police. Once Jeffrey's aparmtent was searched, they found many disturbing things, including human sculls, and dismembered body parts. Dahmer was kept at the Columbia Correctional Institute in Wisconsin. Done By: Andrew Guitar Cont.. The Jeffrey Dahmer Case Case Study Bibliography Dahmer was indicted of 17 murders, which was later recuded to 15. Trial began on January 30th, 1992. Dahmer pleaded not guilty by reason of insanity. http://karisable.com/skazdahmer.htm After 2 weeks of trial, he was found sane and guilty of 15 counts of murder. Dahmer was sentenced 15 life sentences, 957 years in prison. Between 1978 and 1991he had killed 17 men and boys. The first killing being when he was only 18 years old. The murders consisted of rape, dismemberment, necrophilia and canibalism. Dahmer was a sever alcoholic, and gradually his killing became more of a routine. Homicide is a broader statement than murder. When someone commits homicide, it could be criminal, but it could also be an act of self-defense. Criminal homicide is classified as murder or manslaughter, and at different degrees. Grade 11 Open Law Arrest 2nd Degree Murder This is less intentional murder. These can include unforeseen brawls where someone pulls a weapon, where a spouse comes home to find their partner being unfaithful, or where an ordinarily peaceful person is provoked to suddenly lash out. Manslaughter Not guilty by reason of insanity means that he's trying to say that he is not responsible for his actions because of a mental illness. Death http://www.trutv.com/library/crime/serial_killers/notorious/dahmer/index.html What is homicide? Cont.. Homicide Trial He had photos all over his room of the murders, and an alter or candles and human skulls in his closet. By Andrew Guitar 1st Degree Murder What are the different types of homicide? Throughout his trial, Dahmer expressed extreme remorse and guilt, and even stated he wishes death apon himself. His murders caught up with him, and Christopher Scarver felt satisfied with his killing. Killing that is basically unintentional but that is so negligent that society punishes it. This could include something like a driver who speeds recklessly, loses control, and kills someone else on the roadway; the driver did not intend to kill anyone and probably did not even know the victim, but he was intentionally neglecting laws that are meant to keep people safe on the roadways and caused a death through that law-breaking negligence. Thanks for Watching! The deliberate and unlawful killing of one person by another; murder. Background January 16th, 2012

Transcript: Welcome to Our World Mohd Zuhdi Zakaria NurAidiAdha Yaa'kob Anuar Syafiq Idrus Said Azaha Kamaruzzaman Created by eddy callahan contact me @ FB : Mohd Zuhdi You Can Refer Page 53 Lina Joy's parents Her appeal was dismissed 2-1 by Chief Justice Tun Ahmad Fairuz Sheikh Abdul Halim and Datuk Alauddin Mohd Sheriff. The ruling stated that "a person who wanted to renounce his/her religion must do so according to existing laws or practices of the particular religion". In Malaysia, the Shariah Court alone has the power to deal with Islamic issues, including legal recognition for conversion to and from Islam. Conversely, the Shariah Court has no jurisdiction over those who are not Muslims. Lina Joy Bye...Bye,.. Born Azlina Jailani in 1964 Malay convert from Islam to Christianity Converted at age 26 In 1998, she was baptized, and applied to have her conversion legally recognized by the Malaysian courts. Though her change of name was recognized in 1999 and so noted on her identity card. That's All from Us.... n_n Thank You Her change of religion was not (since it is without the Mahkamah Syariah confirmation document). She filed suit with the High Court in 1999, bypassing the Syariah Court (Islamic court). In a majority verdict delivered on May 30, 2007, the Federal Court rejected her appeal.