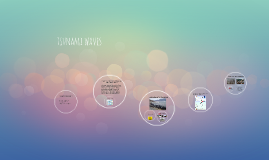 Transcript: how do scientists knows when a tsunami will occur ? what is tsunami ? tsunami is a giant wave or series of waves usually caused by an earthquake,volcanic eruptions tsunami waves QUESTION TIME stay calm the Thilandian tsunami . it was caused due to a volcanic eruption of Krakatoa off the southern tip of Sumatra in 1883 CAUSES OF A TSUNAMI TSUNAMI HITS SUMATRA HOW TO ESCAPE FROM A TSUNAMI WHAT IS A TSUNAMI ? WHAT ARETHE CAUSES OF A TSUNAMI ? HOW TO ESCAPE A TSUNAMI ? WHAT WAS THE FAMOUS TSUNAMI BEFORE 2004 ? WHATS THE HIGHT AND THE SPEED OF A TSUNAMI WAVES IN THE DEEP WATER AND IN THE SHALLOW WATER? WHAT IS THE MATERIAL USED TO DETECT AN EARTHQUAKE? CAUSES OF THE INDIAN OCEAN EARTHQUAKE AND TSUNAMI WHAT CAUSED THE EARTHQUAKE AND THE TSUNAMI ? the outer crust of the earth is like a jigsaw . its broken into huge pieces called plates these plates moves around very slowly . where the plates meets together and cause earthquakes . volcanic eruptions also happens also happens here EFFECTION OF TSUNAMI WAVE WHAT WAS THE FAMOUS TSUNAMI BEFORE THAT IN 2004 ? 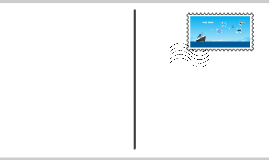 Transcript: Facts about Tsunami 1. An underwater earthquake, a volcano eruption or a landslide mostly causes a tsunami. 2. Tsunami waves can be as huge as 100 feet. 3. The tsunami that occurred in December 2004 in the Indian Ocean is known to be the most powerful earthquake that has occurred till date. Source:http://www.conserve-energy-future.com/various-tsunami-facts.php What is a Tsunami ? A Tsunami is not just a single wave but a series of ocean waves called a wave train caused by an underwater earthquake, by a volcanic eruption, landslide, rapid changes in atmospheric pressure, or a meteorite. Source: http://www.conserve-energy-future.com/various-tsunami-facts.php 4. The places with the greatest risk of tsunami are Washington, Oregon, Hawaii, Alaska and California. 5. Tsunami is a term, which literally means a harbor wave. A term specific to Japan. 6. Thucydides, a Greek historian in his book History of Peloponnesian War was first associated the term tsunamis with underwater earthquakes. Source:http://www.conserve-energy-future.com/various-tsunami-facts.php designed by Péter Puklus for Prezi Waves: tsunami Facts about TSUNAMI Pictures Pictures 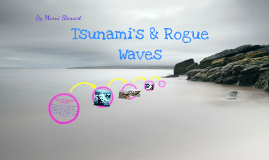 Transcript: Rogue waves are huge waves that can reach 30 + meters high. Rouge waves are caused by various reasons one being waves colliding with the opposite current, waves that overtake each other and form bigger waves until it is classified as a Rouge wave or maybe formed by a storm 100 km away. Rouge waves do not come into land as they happen far out at sea.They are very strong waves, strong enough to take out a cruise ship, oil tanker, or even an oil platform. Sailors used to call them sea monster as they did not want to be called a drunken sailor for believing in rouge waves. What is a Rogue Waves? Rogue Waves What is a Tsunami?, how is it Formed? And what is the Destruction? By Marni Stewart The destruction A tsunami is caused by an underwater Earthquake that has to have a magnitude of 7.0+, and is under the sea bed. Tsunami's are a serious of huge waves that reach the land and can be at the size of 518 + meters high. The destruction of the wall of water is horrendous killing 1000's and destroying homes, villages anything in it's track, the bigger tsunami the more destruction. In the open ocean tsunami's can travel at a speed of 700km per hour. Tsunami's Tsunami's & Rogue Waves By Marni Stewart 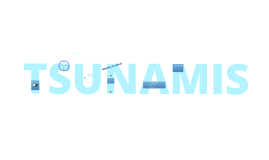 Transcript: What Is A Tsunamis? How Do Tsunamis Work? Where Does The Word "Tsunami" Come From? Tsunami is a Japanese term that means “harbor (tsu) wave (nami)”. How Do Scientists Measure Tsunamis? Underwater Earthquakes Volcano Eruptions Landslides But, the series waves are "mainly" caused by large, undersea earthquakes. Extra Information About Tsunamis The waves can move as fast as 450 mph. Many people say a tsunami's sound resembles a freight train. The largest recorded tsunami was a wave 1720 feet tall in Lituya Bay, Alaska Most tsunamis happen within the "Ring of Fire" The Ring of Fire is located along the borders of the Pacific Plate and other tectonic plates Japan Tsunami On March 11, 2011 Japan had a huge destructive Tsunami that was caused by a huge earthquake. The earthquake struck japan approximately 230 miles in the north eastern side of Tokyo. over 24,000 people came up dead or missing Warning Systems Tsunami warning system (TWS) used to detect tsunamis in advance and issue warnings to prevent loss of life and damage. http://en.wikipedia.org/wiki/Tsunami_warning_system Thank You For Watching ! Tsunamis are caused by ... )': Tsunami: a series of waves(sea waves) ^Where I Found This Info. ^ What Causes Tsunamis? TSUNAMI IN JAPAN! http://geography.about.com/library/faq/blqzringoffire.htm scientists normally measure the height of the waves. http://geology.com/records/biggest-tsunami.shtml TSUNAMIS Scientists use seismographs to measure tsunamis 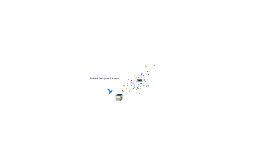 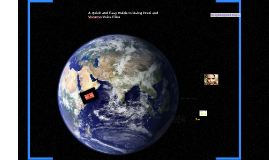 Transcript: A Quick and Easy Guide to Using Prezi and Vocaroo Voice Files Using Background Images Adding Videos is Easy Books are just cold bodies; text is dead until brought to life by the fire of the reader's imagination. The soul of a book is not contained within its covers, but within the mind of its reader. We are like Dr. Frankenstein, evoking life from the black lines and the white space of writing. Black Widow Baby!!! 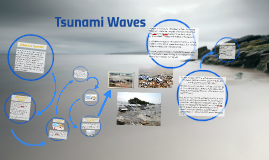 Transcript: http://news.nationalgeographic.com/news/2007/04/070402-tsunami.html http://academic.evergreen.edu/g/grossmaz/springle/ http://www.livescience.com/39110-japan-2011-earthquake-tsunami-facts.html Earthquakes and Tsunamis Tsunamis, on the other hand, can be caused by a few different means: 1) the down drop or upthurst of the Earth’s crust which results in an earthquake; 2) a large-scale undersea landslide; 3) a submarine volcanic eruption of a certain degree; or potentially, 4) a large meteor impact at sea. The vast majority of tsunamis result from earthquakes. Tsunami Waves Japanese Earthquake and Tsunami What is a Tsunami? A tsunami is a series of great sea waves caused by an underwater earthquake, landslide, or volcanic eruption. The term tsunami has its origins in the Japanese language; an English equivalent is "seismic sea waves." Tsunamis are often incorrectly interchanged with the term" tidal waves," which refer to high waves of water caused by changes in the flow and surge of the ocean. Most tsunamis are caused by earthquakes generated in a subduction zone, an area where an oceanic plate is being forced down into the mantle by plate tectonic forces. The friction between the subducting plate and the overriding plate is enormous. This friction prevents a slow and steady rate of subduction and instead the two plates become "stuck". As the stuck plate continues to subduct into the mantle the motion causes a disturbance in the overriding plate. The result is an accumulation of energy very similar to the energy stored in a compressed spring. Then when the pressure becomes too much overriding plate snaps back into an unrestrained position. This sudden motion is the cause of the tsunami - because it gives an enormous shove to the overlying water. At the same time, inland areas of the overriding plate are suddenly lowered. In Japan, residents are still recovering from the disaster. Radioactive water was recently discovered leaking from the Fukushima Daiichi Nuclear Power Plant, which suffered a level 7 nuclear meltdown after the tsunami. Japan relies on nuclear power, and many of the country's nuclear reactors remain closed because of stricter seismic safety standards since the earthquake. Four years after the quake, about 230,000 people who lost their homes were still living in temporary housing, Japan's Reconstruction Agency said. What Causes a Tsunami? The total damages from the earthquake and tsunami are estimated at $300 billion dollars (about 25 trillion yen), according to the Japanese government. On March 11, 2011, a magnitude-9 earthquake shook northeastern Japan, unleashing a devastating tsunami. The effects of the great earthquake were felt around the world. Tsunami debris continues to wash up on North American beaches two years later. Sources: The number of confirmed deaths is 15,891 as of April 10, 2015, according to Japan's National Police Agency. Most people died by drowning. More than 2,500 people are still reported missing. Less than an hour after the earthquake, the first of many tsunami waves hit Japan's coastline. The tsunami waves reached run-up heights (how far the wave surges inland above sea level) of up to 128 feet (39 meters) at Miyako city and traveled inland as far as 6 miles (10 km) in Sendai. The tsunami flooded an estimated area of approximately 217 square miles (561 square kilometers) in Japan. 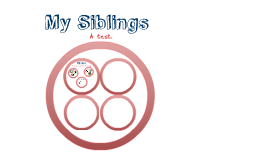 Transcript: Molly And Leo A test. Elaina loves drawing But none more than here own two: Drawing Soccer Elaina loves dogs. Second youngest in the family But she didn't draw those. She isn't professional or anything She is the striker, and she scores a lot of goals. My Siblings Dogs Elaina Elaina's favotite sport is soccer