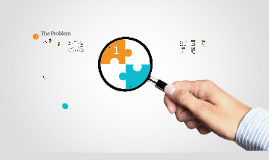 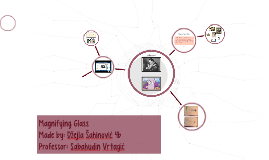 Transcript: Magnifying Glass Made by: Džejla Šahinović 4b Professor: Sabahudin Vrtagić -Makes things appear larger -Convex-shaped glass or plastic -Has to be held in the right distance to be in focus Magnifying Glass Who am I? 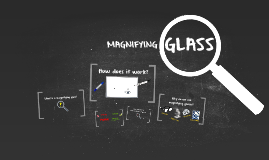 Transcript: . . Delicate jobs . . ? Vision aids How does this fit into the theme of optics? POSITIVE GLASS What is a magnifying glass? Why do we use magnifying glasses? 2F op·tics /äptiks/ noun the scientific study of sight and the behavior of light, or the properties of transmission and deflection of other forms of radiation. none NEGATIVE MAGNIFYING F 2F Home & hobbies F How does it work? helps us with every day tasks . Scientific tools 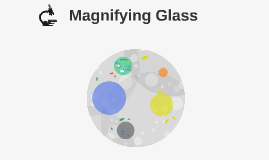 Transcript: Production Of Heat The suns light energy enters the convex lens and is refracted since the glass is more dense than air. The lens then concentrates the light into one small point, the focal point. When all the light rays all meet at this point they create heat. Creating An Image Convex Lens How It Works A magnifying glass is used to magnify (enlarge) an object its assists people with hobbies and crafts and also helps people with low vision, and other vision conditions. convex lenses or magnifying glasses can also be used in solar panels. Convex lenses are usually made of glass or plastic, which is used to refract the light rays to a concentrated point. The lenses are often double lenses meaning that there are two curved sides. Convex lenses are curved outward. How Its Used Light beams from the top of the image travel through different parts of the lens. The lens then bends the rays through refraction, since the glass is more dense than air. To the person looking through the lens it appears as though the light beams come from a point that is further to the left and to the top. That is a virtual image because all the convex lens has done is bend the light rays in a way that creates a virtual larger image. As the lens bends the light rays we can not see the real image, we can only see the virtual magnified version created. Magnifying Glass 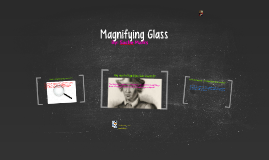 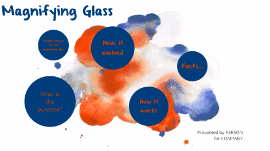 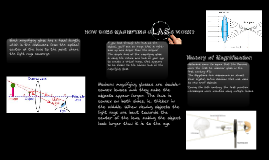 Transcript: The simple lens of the magnifying glass is using the retina and lens of your eye to create a virtual image, that appears to be closer to the convex lens of the magnifying glass Modern magnifying glasses are double-convex lenses and they make the objects appear larger. The lens is convex on both sides, ie. thicker in the middle. When viewing objects the light rays are bent towards the center of the lens, making the object look larger than it is to the eye Each magnifying glass has a focal length, which is the distances from the optical center of the lens to the point where the light rays converge History of Magnification During the 16th century, the first primitive microscopes were invented using multiple lenses HOW DOES MAGNIFYING G S WORK? LAS If you look through the lens at the object, you'll see an image that is right-side up and larger than the original The Egyptians had discovered an almost clear crystal, called obsidian that was used to view small objects Historians seem to agree that the Romans were the first to discover glass in the first century AD 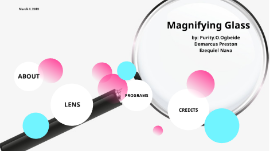 Transcript: Magnifying Glass March 4, 2019 by: Purity.O.Ogbeide Demarcus Preston Ezequiel Nava Hi sisters ... ABOUT A Magnifying glass: Created by Roger Bacon in 1201-1300 Most magnifying glasses are double convex lenses. A magnified image is a called a virtual image. it is used to make an image bigger, it can also be used as a last resort to make a fire. This is the ancestor of a compound microscope. ( normally found in a lab) A compound microscope A Compound Microscope Uses multiple lenses to enlarge the image of a sample. A compound microscope is used for viewing samples at high magnification LENS Convex lenses A lens surface that bulges outwards is called a convex lens. Identified by their shape which is thick across the middle and thin around the edges which are curved outwards. Since the surface is curved, different rays of light refract to different degrees; the outermost rays will refract the most Objects That Use Convex Lenses Telescopes Binoculars Magnifying Glasses RAY DIAGRAM This is the ray diagram for a magnifying glass. Lens CREDITS Links: https://www.universetoday.com/82589/convex-lens/ https://images-na.ssl-images-amazon.com/images/I/31tZ8DG1SvL._SX342_.jpg https://www.encyclopedia.com/science-and-technology/technology/technology-terms-and-concepts/magnifying-glass http://www.math.ubc.ca/~cass/courses/m309-03a/m309-projects/yeh/micro.JPG www2.mrc-lmb.cam.ac.uk https://images.costco-static.com/ImageDelivery/imageService?profileId=12026540&imageId=100423444-847__1&recipeName=350 https://images-na.ssl-images-amazon.com/images/I/41YD1z0z5fL._SX300_QL70_.jpg http://www.leydenscience.org/physics/electmag/con_inf.jpg