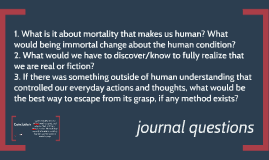 Transcript: EVENT C B. Major Knag finds that his daughter Hilde is sending him constant messages, directing his every move. "The Sixth Sense" Ending discussion questions Sophie and Alberto enter Hilde's world as spirits, and observe Hilde and Major Knag's reunion. Although they are only characters in a story, they are now free from the major's grasp. INTRO: Sophie and Alberto escape from the major's control into Hilde's world. The major lands in Copenhagen to find that his daughter was directing his movements and possibly observing him. Chapter 34 1. What is it about mortality that makes us human? What would being immortal change about the human condition? 2. What would we have to discover/know to fully realize that we are real or fiction? 3. If there was something outside of human understanding that controlled our everyday actions and thoughts, what would be the best way to escape from its grasp, if any method exists? COUNTERPOINT "…two or more melodies sounding together…" Conclusion peyjmon ahmad, eugene cheng sara hansen, varun yuhanna EVENT A a. “They turned off into a large wheatfield. Sophie looked back and saw that they had left a broad trail of flattened stalks...'Tomorrow they'll say a freak wind blew over the field,' said Alberto" (489). discussion questions a. "Suddenly the UN observer began to feel himself observed. It was as if someone was in remote control of everything he did. He felt like a doll in the hands of a child" (491). How does the main character in "The Sixth Sense" relate to Sophie and Alberto in Hilde's world? Which is actually reality: Sophie's world or Hilde's world? Have you ever felt the presence of a spiritual force? A. Sophie and Alberto enter Hilde's world as eternally living spirits that, for the most part, cannot interact with ordinary objects and people. b. "'Sprit is more solid than ice...spirits can pass through steel doors. No tanks or bombers can crush anything that is of spirit'" (494-495). EVENT B b. “But my control over your movements is more ingenious than that. I can see you wherever you are, Dad" (497). Is there such thing as free will, or is it just an illusion? If there is a force or entity controlling you and/or everyone, what's the purpose of it? What are some things in life that knowingly control your decisions? If you had a choice, would you rather be immortal, but unable to have human experiences like love and fear, or mortal? Have you ever had to make one decision that changed you fundamentally as a human being? What does it mean to live? Major Knag arrives in Copenhagen and receives an envelope from Hilde greeting him. He then finds a succession of little notes and letters wherever he goes, as if she was watching over him, controlling his every move. City of Angels Trailer C. Sophie laments the fact that she can never be "real" like Hilde, but being a spirit has its own advantages. discussion questions e. "'It's only the major who left [the story] behind. He has written the final word of his book, my dear, and he will never find us again'" (503). Getaway Trailer journal questions Sophie and Alberto arrive at Bjerkely before the major gets home and see Hilde waiting for her father. She seems to have a very slight indication of their presence around her. The major reunites with his family and hints at a final philosophical lesson. Sophie and Alberto ponder on life. c. "She thought she heard a faint breath of something, exactly as in her dream about Sophie" (500). period 5 After the garden party, Sophie and Alberto escape into Hilde's existence to find that they are spirits. They also find other spirits who live as remnants of fairy tales and stories. Although no one in Hilde's world can sense their presence, they can slightly alter the world around them. d. "'But there are two sides to everything...she who wins the lot of life must also draw the lot of death'" (502). 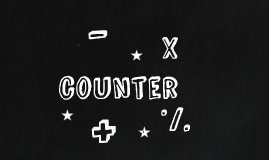 Transcript: do you like your job? . YES,BECAUSE I LOVE MATH AND MY FRIENDS what are the main materials you use most and likes ? /. + to make money computer and financial calculator what is a conter what you had to do to work on it? how you chose this work? I work 19 years - because math is a good thing and i like to much math but i like more my family counter he began working with 19 years old x how many years you are doing this work? Seven years later he met my mother is a people who take care of the heritage of a person , factories or stores which is your goal? Helping others like to spend your money works : IBTeC born : March 2, 1977 Age: 38 in working : contabilidad He is the father of : Priscilla Wathier lives: Campo Bom i study to much i went to many classes an do a bachelor (it's a college ) Rogerio luiz Wathier 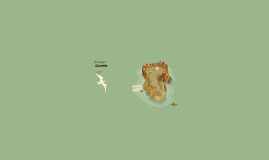 Transcript: Prologue a novel "Believe. Believe in your dreams. Believe in the impossible. Believe, and you shall fly. All you have to do is believe, and your dreams will become true." - anonymous Day 1 I was there, then I was here. I was everywhere. If you dream, if you believe, you will encounter it, sometime or another. This is my story. This is my Counter. Miz It has brown dirt. Foresty. Not that many animals. No birds singing. It's barren and dead plants rustle slightly in the wind. The wild life is few- strangely the trees are the only ones alive-thriving, actually. A cloudy, gray sky that somehow swirls upwards like an upside down tornado made with clouds but it's not moving. It's eerie. That's the only word to describe this place. eerie. I don't know. It's strange. eerie. I'm dazed. I think Teo is to. This place is dazed. It seems. It's confusing. eerie. There's more to this place than it looks. We're walking. Nowhere. Somewhere. It's raining. Only drizzling. I don't think I'm dazed anymore. Maybe I am. It must be the trees. I've been tried, like I'm in the poppy field in "The Wizard of Oz". It must be the trees. They're not normal. I cut onto one with my pocket knife. It has no sap. There's some sort of jewel. Quartz, I think. Black quartz. there are traces of blood in it, but its not liquid. It's hard, like the jewel itself. I didn't tell Teo. I think he hit his head. He's muttering and stumbling. I don't know what it all means. Mabye I hit my head and I'm going crazy. Confusing. Mizallia (Miz) Journaling from Quartz 9/28/1991 unknown Miz Day 4 Counter 9/30/1991 unknown Day 2 9/29/1991 unknown 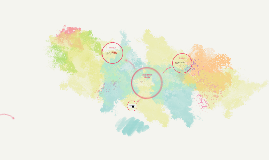 Transcript: In the 1970s various persons claimed to have seen the bodies of the aliens stored at secret location. Ufos are real COUNTER CLAIM ther countries reported flying saucers.O The forth worth starte legram published a picture of 2 officerse beside the crash. EVIDENCE EVIDENCE EVIDENCE 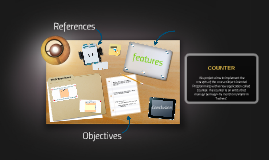 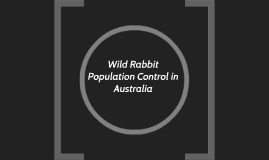 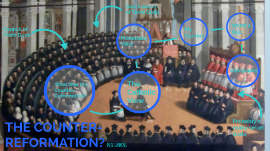