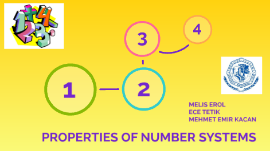 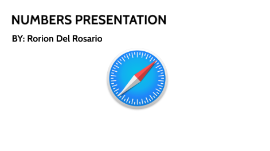 Transcript: BY: Rorion Del Rosario NUMBERS PRESENTATION About 1 result (0.001 seconds) What is Rule 1 Spell out numbers that require only one word. Use numerals for numbers requiring more than one word. www.Hard&FastRules.com Example of Rule 1: I am twelve years old, but turning thirteen. The same rule also applies to ordinal numbers. 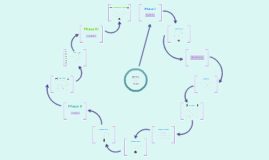 Transcript: Separation The Return Phase III Road of Trials Supernatural Aid Guide/Mentor Spider and Jem are close friends since they have had to deal with their troubles together. Their friendship formed in a very short amount of time. Spider was with Jem through many hardships and helped her after they ran away together. Spider thought about Jem also, and not just himself. Jem makes friends along the way of the journey. Even though she doesn't know these people, they help her by letting her stay in their home or place of work, and by giving her food. These few people helped Jem after Spider had been taken away. Amy Klezek Journey Map Numbers By: Rachel Ward Belly of the Whale Initiation Jem's threshold is getting along without Spider. Jem has been on her own for her whole life, being a foster child and never having many friends or father figures to look up to. Without Spider though, she doesn't know how to get through these new circumstances alone. Without Spider, Jem has trouble with knowing what to do. This is where her new companions come in play to help her. The police were constantly trying to take Jem and Spider into custody since they had run away from their homes. They succeeded in taking Spider, but Jem figured her way out of it with the aid of companions and by being smart with her actions. Jem never really had a place to call home because she has been in foster care almost her entire life. The only motherly figure that she has is her foster mom, Karen. After Spider's death, Jem and Karen live at home in London with Jem's son, Adam. Jem had to become Karen's mother figure about five years later when Karen has multiple strokes. After Karen dies, Jem settles with Adam in Weston, where Spider had always wanted to be. Call to Adventure Crossing the Return Threshold Phase I Jem goes through many tough events in her journey. There are many challenges she faces in a very short amount of time. Some of these challenges effect her ability to continue on to her destination of Weston. Some of these challenges included Jem tripping onto barbed wire, twisting her ankle, and running out of food very quickly. There were also even worse challenges, such as figuring out where they could sleep, trying not to be recognizable to the police, Jem saving Spider from drowning, running from the police, and when Spider was eventually taken into custody by the police. These were all challenges that Jem faced with Spider, and sometimes without him. Battle Jem faces an internal conflict when it gets later and later in the day of Spider's death. She thinks a lot about what everyone is asking her, telling her, and saying about her. She comes to the conclusion that if no one can see the numbers, they might as well not exist. She thinks the only way to get rid of the numbers is to kill herself, since she is the only one who sees them. It makes sense to her that if she kills herself, she could save Spider and all the other people that she has met or is close to. Threshold Guardians Crossing the Threshold Phase II Jem has always seen numbers when she made eye contact with people. She didn't know what they were until the day her mother died, they were death dates. Jem thought that she could possibly help people by knowing the date they would die, and keep them out of harms way. She thought that the system of fate and dying could be cheated by making yourself or someone else die sooner. Jem had kept her secret of being able to see a person's death date for 15 years. She was always scared to tell someone, but when she finally does, it comes more naturally to tell more people. Once she had told just a select few, she still didn't feel completely comfortable with the entire world knowing her story. There is no guide or mentor to help Jem along the way of her journey, with and without Spider. The only person that knows how Jem really feels and can relate to her is Val, Spider's grandmother. Val is not present during her journey, so she doesn't guide her along the way. Companions 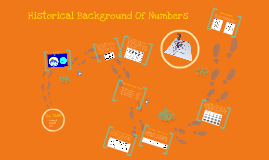 Transcript: The Roman numerical system is still used today although the symbols have changed from time to time. The Romans often wrote four as IIII instead of IV, I from V. Today the Roman numerals are used to represent numerical chapters of books or for the main divisions of outlines. The earliest forms of Roman numeral values are: Numerical systems devised of symbols were used instead of numbers. Babylonians stamped numbers in clay by using a stick and depressing it into the clay at different angles or pressures and the Egyptians painted on pottery and cut numbers into stone. The Chinese had one of the oldest systems of numerals that were based on sticks laid on tables to represent calculations. It is as follows: The Chinese Number System The TEAM Kritagya Vinayak Syed The Roman Number System Thousands of years ago there were no numbers to represent two or three. Instead fingers, rocks, sticks or eyes were used to represent numbers. Paper and pencils were not available to transcribe numbers. Other methods were invented for means of communication and teaching of numerical systems. Historical Background Of Numbers The Chinese Number System The Greek Number Sustem The Roman Number System The Mayan Number System The number system which is used now a days is actually a place value (decimal System). This means that not just the number, also the way the number is placed or positioned is important Lets Revise HINDU-ARABIC How did the it all start? THE PRIMITIVE NUMBER SYSTEMS The Mayans had a number system consisting of shells, dots, and lines. You could write up to nineteen with just these symbols. The Maya were one of the only ancient civilizations that understood the concept of zero. This allowed them to write very large numbers. The Mayan Number System