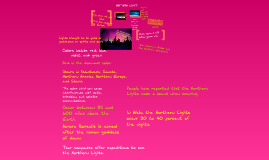 Transcript: NORTHERN LIGHTS Seen all around the world Gorgeous The solar wind can cause interfenrence with radio, television, and satelite communications. Seen clearly in Alaska and the Northern Hemisphere Lights thought to be gods or goddesses or spirits and souls Troms and Finmark can see it every night. extraordinary too large to measure, abundance of colors, and soooooo prettty! Tour companies offer expeditions to see the Northern Lights. People have reported that the Northern Lights make a sound when occuring. nature's love Other places see it September through April (: First seen 4 1/2 billion years ago In Alska the Northern Lights occur 30 to 40 percent of the nights. Aurora Borealis is named after the roman goddess of dawn. Colors include red, blue, violet, and green Red is the dominant color. Occurs in Scandinavia, Canada, Northern America, Norhtern Europe, and Siberia. Only seen at one time during the year in Europe Occur between 35 and 600 miles above the Earth. 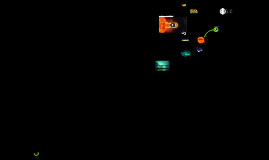 Transcript: 93 million miles later http://www.youtube.com/watch?v=N5utQxtma2U&feature=related The origin of the aurora (Northern Lights) begins on the surface of the sun when solar activity ejects a cloud of gas. It collides with Earth's magnetic field. In some areas, such as Alaska and Greenland, these lights can be seen on most nights of the year. So lets begin our journey on how the Northern Lights are created. The Northern Lights, one of several astronomical phenomena called polar lights, are shafts or curtains of colored light visible on occasion in the night sky. As the mass coronal energy hits the earths magnetic field it travels to the North and South Poles. As the coronal mass ejection collides with Earth's magnetic field, the energy disperses to the North and South Poles. Colors and patterns are from the types of ions and atoms being energized as they collide with the Earth's magnetic field. The displays may take many forms, including rippling curtains, pulsating globs, traveling pulses, or steady glows. Also, the altitude affects the color of the aurora. When a coronal mass ejection collides with the Earth's magnetic field, it causes complex changes to happen to the magnetic tail region. The start of an aurora starts when a solar storm is created from the suns core. The energy from its core becomes so powerful and emits a solar storm that travels through space. The changes generate currents of charged particles, which flow along lines of magnetic force into Polar Regions. The particles boost with energy and when they collide with oxygen and nitrogen atoms, they produce dazzling auroral light. In a coronal mass ejection, it's speeds can range from, 200 kilometers per second to over 2000. Northern Lights 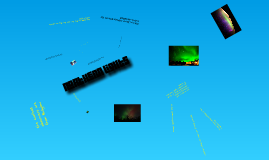 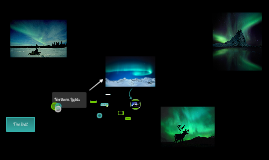 Transcript: The Northern Lights or Aurora Borealis is one of the most amazing ongoing occurrences in science. They occur in the Artic and Antartic regions. An aurora is caused by the converging of energetic charged particles with atoms in the thermosphere. Auroras ionized or excited. This determination is dependent on the colliding of magnetospheric particles and the solar winds along the earth’s magnetic field lines. When they are exited they are released as oxygen emissions. The emissions are what produce the colors of brownish-red or green. When the ionized nitrogen emissions are released, they create the colors of blue and red. The End! Northern Lights The name Aurora, in aurora Borealis, is named after the roman goddesses of dawn. The Borealis, in aurora Borealis, comes from the Greek name for the north winds which is called boreas. The most recent spectacular ones were seen on both August 28 and September 2, 1859 The magnetosphere and solar wind is where these charged particles are created. These magnificent occurrences are in a band called auroral zone. This zone is usually is in the 3 to 6 longitude. 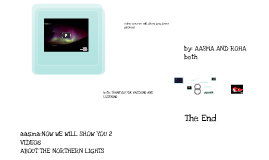 Transcript: Northern lights aasma: There is a lot of information about the northern lights in the cultures of eastern Asia. The northern lights appeared in China more than 2,000 years ago. Chinese people never used any special name for the northern lights. Instead, the heavenly lights were described by using terms like fire and animals, especially the dragon. roha: now we will show you some pichers aasma:NOW WE WILL SHOW YOU 2 VIDEOs ABOUT THE NORTHERN LIGHTS both: THANKYOU FOR WATCHING AND LISTENING by: AASMA AND ROHA both The End roha : It is the the atmosphere that makes the aurora red and blue and the oxygen that causes the red and green colours to appear. Most aurora lights occur between 90 and 130 kilometres (56 and 80 miles) above sea level, but some, go up to several hundred kilometres . The name 'Aurora Borealis' is Latin . aasma: The Northern Lights are particles from the sun that pass through the shield of earth and create light when they mix with atoms such as nitrogen and oxygen gases on entering into the earth's atmosphere. These particles travel 149 million kms or 93 million miles through space towards planet earth being towards the earth north and south polar regions. roha: The nothern lights has amazed people for centuries. Yellowknife is one of the best places in the world to watch the Northern Lights and The Explorer Hotel can be the base to start your adventure. roha: The Aurora Borealis is also called the northern lights because it is only visible in the North sky from the Northern Hemisphere aasma : Did you know that : The aurora has a curtain- shape, and its lower edge is 95 or 110 kilometres (60 or 70 miles), about ten times higher than a jet aircraft flies. 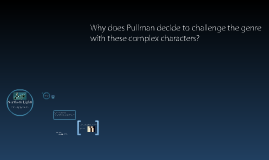 Transcript: But seriously... some much better than PowerPoint Plot focus Convincing, Engrossing Narrative Characters become secondary Episodic So how does Pullman create these complex characters? Why does Pullman decide to challenge the genre with these complex characters? "JK Rowling and Pullman together dominate children's fiction. This is a capricious market, and Pullman's stories are seen as intellectually sounder, the more heavyweight read in a world where children's fiction is read by adults" Lord Asriel "After many pages, one starts to find the style oddly bland and characterless; ultimately it comes to seem, like other things in The Lord of the Rings, anemic, and lacking in fiber" Archetypal characters & Contradictions ...this is because I was granted permission to use Prezi.com by one Miss Renee Meyer: Richard Jenkyns: Northern Lights Challenging a Genre If you think this presentation looks familiar... Archetypes - "a primordial image, character, or pattern of circumstances that recurs throughout literature and thought consistently enough to be considered a universal concept or situation." - Britannica Online Encyclopaedia For example: the Master could be seen as the wise old man, while Lord Asriel as the fatherly figure. In all these archetypes, each is generally seen as good or evil. Pullman depicts behaviour that contradicts the archetypes of his characters, thereby creating depth. TA-DA!!! Our first impression of Asriel is from Lyra's point of view: "The visitor mentioned by the Master, Lord Asriel, was her uncle, a man whom she admired and feared greatly." Contradicts this impression in the final chapter, where Asriel sacrifices Lyra's friend Billy to open the portal to the other worlds. This revelation at the climax, creates a clear contrast with the previously established notions of his character and as a result, has the reader re-examine his true motives. So Baadddd Dina Rabinovitch Elements of Fantasy Genre 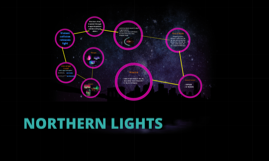 Transcript: NORTHERN LIGHTS Oxygen NITROGEN Colors of Light Created What it is natural light show in the sky also called "aurora borealis" in the Arctic Region Above 150 miles (red) Up to 150 miles (green) Above 60 miles (purple/violet) Up to 60 miles (blue) Elements Involved Electrons that traveled through magnetospehere collide with gas atoms Nitrogen How it Works charged particles, electrons, come from the sun and solar winds blow the electrons through the solar system along the sun's magnetic field lines OXYGEN NITROGEN OXYGEN earth has shield around it called magnetosphere shield around the earth blown by solar winds into a tear dropped shape Earth's upper atmosphere Violent collision releases light 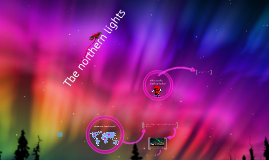